Tesla′s rival Nikola to come up with heavy-duty truck of the future? | Business| Economy and finance news from a German perspective | DW | 17.06.2020 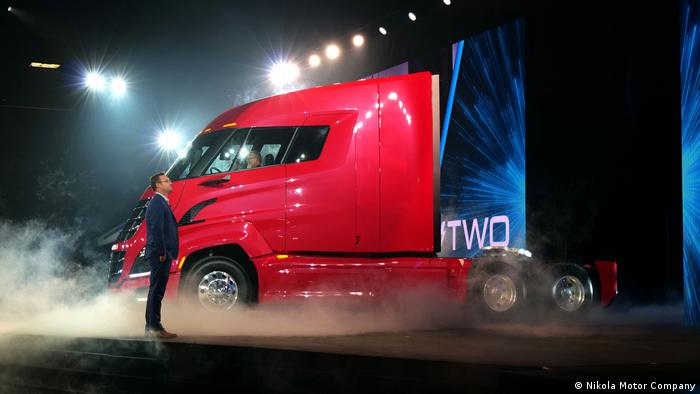 It surely takes some courage to risk an IPO amid the coronavirus pandemic. The founder of startup Nikola, Trevor Milton, will not have regretted the move, though. Two weeks ago, the company went public on New York's NASDAQ and Nikola shares have since gained about 100% in value.

Nikola is located in Phoenix, Arizona, and is currently making big plans. The firm is aiming to become the greenest truck maker, striving to be what Tesla is for the passenger car sector. Nikola's idea is to build trucks that are powered by a combination of electricity and hydrogen, with the required energy to come from fuel cells. The latter are smaller, lighter and less expensive than conventional batteries. This way, Milton hopes to eventually produce trucks with a longer range than his rival Tesla.

Funnily enough, Elon Musk used the last name of alternating current motor inventor Nikola Tesla for his brand, while Trevor Milton went for the engineer's first name. Both entrepreneurs have set out to revolutionize the vehicle market.

Musk and Milton have not been particularly modest while talking about their ambitions. While Musk has said he wants to colonize Mars, Milton said recently he wanted to "dethrone" the Ford-150, the world's bestselling pickup truck. 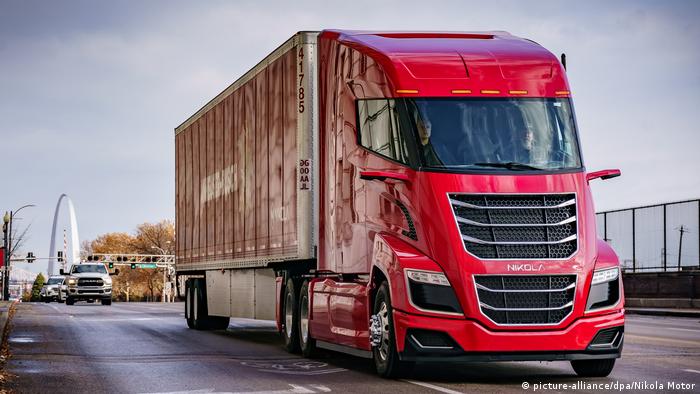 Nikola truck prototypes are being tested on US roads

Despite its breathtaking IPO, analysts are divided over the future of the Nikola startup. "Nikola is the next $100 billion [€88 billion] company," Jeffrey Ubben, founder of hedge fund ValueActCapital, told CNBC.

The financier, who's invested millions in the startup himself, believes that Nikola will resolve one of the biggest problems ahead — the gradual reduction of the carbon content in fuels. He argues that Nikola is ahead of the curve with regard to the development of emissions-free trucks. "The diesel guys are late and way behind," Ubben noted.

Many investors also seem to be upbeat about Nikola. Shares were first issued at $34 apiece and are now twice as expensive, meaning the company has already gained a market value of over $20 billion. Milton is over the moon.

However, many analysts are a lot less enthusiastic about Nikola's performance. While most are tight-lipped about the firm, those who do make comments say investors should be cautious. "The company should grow quickly," said Brad Gastwirth, chief technology strategist at Wedbush Securities. But that alone was no reason to become ebullient. "Nikola is getting way ahead of itself in my opinion," Gastwirth concluded.

Former Wall Street analyst and staunch Tesla supporter Gary Black, has some doubt, too. The hype around Nikola could mean a hard landing for private investors when the bubble bursts, he says, adding that Nikola doesn't have any production facilities yet, nor is there more than a few pictures and promises right now.

A brief look at Nikola's fundamental data reveals why analysts remain lukewarm about the startup. Six years after its founding, the company still isn't making any profits or revenues.

The current hype is based on expectations and hopes. There are around 14,000 preorders for trucks meant to wash some $10 billion into the company's coffers by 2028.

Nikola says the renowned Anheuser Busch brewery is among its clients and has ordered 800 hybrid trucks.

But not a single such truck has left the assembly line so far. There are only some prototypes being tested on US roads. Annual earnings reports and quarterly figures relate to VectorIQ, the company behind Nikola's IPO.

A big chunk of the proceeds from the IPO is being pumped into the construction of Nikola's first truck plant in Coolidge, Arizona, some 80 kilometers (50 miles) away from Phoenix. 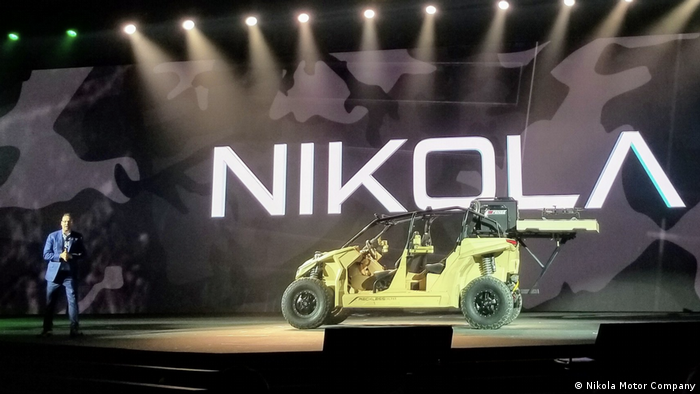 Trevor Milton is seen during a presentation of a pickup

Come 2023, some 50,000 trucks are to be produced there annually. Until then, Nikola will stay involved in a German production line located in Ulm where — in cooperation with Iveco — all-electric, battery-powered trucks are to be churned out from the end of 2021.

IPO proceeds are also to go toward Nikola's first hydrogen fueling stations. Like Tesla, Nikola plans to provide the whole infrastructure for its future trucks. Some 700 such fueling stations are to be built over the next eight years, initially in the US and Canada. The company also aims to sell hybrid pickups for private customers. It's set to accept preorders from June 29.

Analysts such as Brad Gastwirth are reluctant to compare the two companies, despite all the similarities at hand. "Tesla has multiple end markets and a different long-term strategy," he said, adding that Nikola's edge over other truck makers like MAN or Daimler was not so impressive after all, given that rivals in other parts of the world had long been working on emissions-free trucks, too.

So, how realistic is it to eventually see Nikola emerge as a long-term winner? "This is a $1 trillion question," Gastwirth quipped.