Driving a hydrogen-powered car in Denmark | Business | Economy and finance news from a German perspective | DW | 13.06.2019

Driving a hydrogen-powered car in Denmark

Hydrogen-powered cars are still few and far between. In Europe, Denmark stands out for having the most dense network of stations for the CO2-free fuel. Oliver Ristau looks at whether such cars are suitable for daily use. 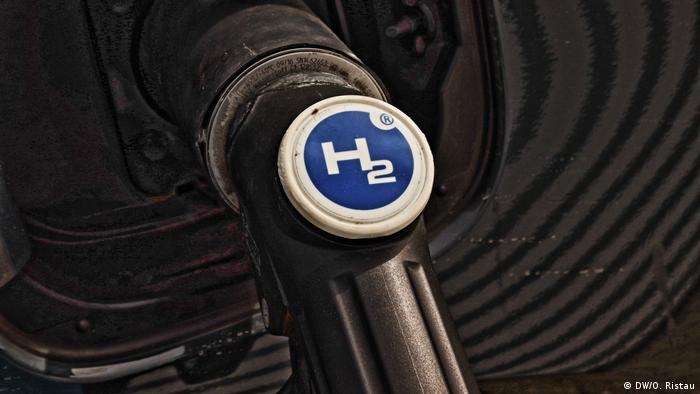 The fuel pump display stops at 3.8 kilograms, that's all the tank can accommodate on top of what was left inside. There's a batch of fuel cells under the hood. A tank filled with the maximum capacity of some 6 kilograms of hydrogen will take you about 600 kilometers (370 miles) in a Nexo car from South Korean automaker Hyundai.

In Aarhus, on the eastern coast of the Danish mainland, a kilogram of hydrogen costs 107.5 kroner (€14.4, $16.3) and thus a lot more than the €9.5 you would have to pay for the same amount of hydrogen over in Germany.

Whoever wants to refuel their hydrogen-powered cars in Denmark needs to register upfront with gas station equipment provider NELHydrogen. You'll get a key plus PIN code to unlock the nozzle at the pumps. The bill will be sent to you later.

Denmark currently has eight hydrogen fuel stations. Measured against the country's overall population, the nation thus has Europe's most dense network. Among the operators are Danish petroleum company OK and France's Air Liquide.

Hydrogen from the container

Some 70 kilometers north of Aarhus, the French run a hydrogen production facility — white containers with a corrugated surface and grey pipes can be seen from afar.

"In principle, we're using a simple procedure," says Soren Bjerregaard Pedersen, chairman of project partner Hydrogen Valley. "The only thing you need is water and electricity, and then we get hydrogen and oxygen in these containers." 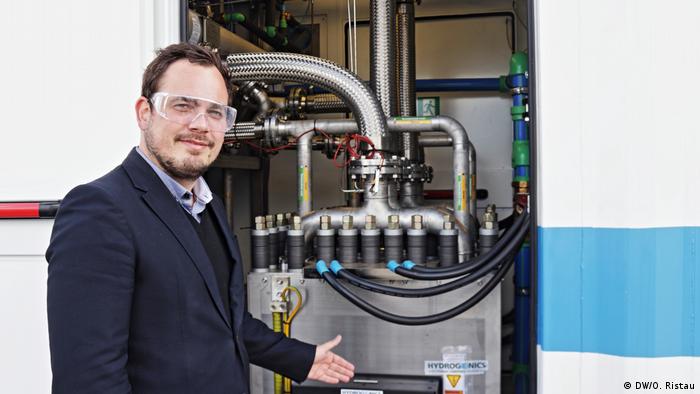 In a metal box, there's an electrolyzer with a capacity of 1.2 megawatts that splits water into hydrogen and oxygen. It can produce 500 kilograms of hydrogen per day, with the oxygen just channeled into the outside air.

In a car's fuel cells, hydrogen reacts with oxygen to generate electricity. There are no harmful emissions in the process. The only waste product is water, which escapes though a kind of exhaust pipe.

Of course, fuel cell cars are only really green when the fuel itself is produced with renewables. Pederson is planning exactly that. "We want to produce hydrogen when there's a surplus of wind energy available," he explains. "That way we can get green electricity into other sectors of the economy such as transportation."

For the time being, that's a concept for the future as the electrolyzer at Hobro gets its electricity from the grid at any time, making the hydrogen produced more grey than green — in Denmark's electricity mix, renewables account for 50%. "We're working on an algorithm to produce only when prices are low," says Pedersen.

That would most likely be the case during the night and on weekends when electricity demand is low in the country, but wind turbines work at full speed and sometimes have to be switched off so as not to overload the grid. That excessive electricity could be put to good use when producing hydrogen at the Hobro facility. 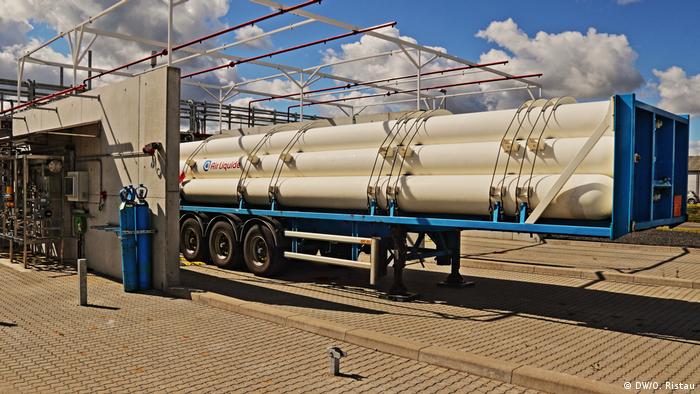 Transporting hydrogen is no plain sailing, but the Danes have perfected the business

Green hydrogen would then be something like stored renewable energy that could help the climate as it would be different from conventional hydrogen used in industry and produced on the basis of natural gas and chloric gas.

Hydrogen production makes sense in the vicinity of those willing to buy it as transporting the volatile gas is not really efficient.

Pederson is standing in front of a hydrogen trailer where gas cylinders form a pyramid-like structure and are filled via a magnitude of pipes and valves. A truck gets the gas to the nearby fuel station in Aalborg.

Such a trailer can hold no more than 600 kilograms of hydrogen, at a pressure of no more than 220 bar. Using a higher pressure would be complicated and expensive. Liquefied hydrogen would consume less space, but for that the substance would have to be cooled down to minus 250 degrees Celsius, and that would cost a lot of energy.

The most important customer for the Hobro facility is metalworking company Sintex, which belongs to Danish pump-producing firm Grundfos. It gets the hydrogen through pipelines. Also, there are big salt domes in the Northern Jutland region. "They could serve as potential hydrogen storage facilities," Pedersen explains.

The number of hydrogen buyers has been going up steadily in Denmark in recent years. Copenhagen now has a fleet of 20 hydrogen-powered taxis. There are not yet enough such cars available on the market. Besides Hyundai, there's only Toyota offering fuel cell cars.

Integrating hydrogen technologies and wind power could lead the way toward 100 percent renewable energy. But the path is under construction - and still requires a lot of hard work. (15.06.2016)

An alliance of 11 Japanese carmakers and energy firms has pledged to build a lot more stations for hydrogen fuel cell vehicles. The move is meant to boost the production and sale of new-energy vehicles in the country. (05.03.2018)