Tens of thousands flee Mosul as operation against ′IS′ intensifies | Middle East| News and analysis of events in the Arab world | DW | 09.11.2016

Tens of thousands flee Mosul as operation against 'IS' intensifies

Nearly 42,000 people have fled the Iraqi city after the military launched a crackdown to retake control from "Islamic State." The figures have been released by the International Organization for Migration (IOM). 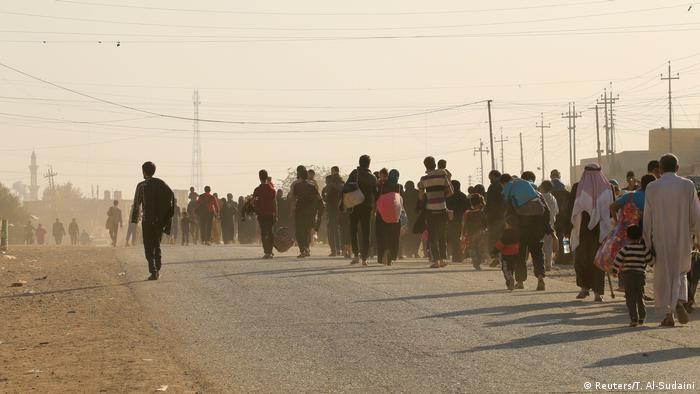 The IOM said on its website that 41,988 people had left the city "as a result of the ongoing Mosul operations," which began on October 17 this year. A day earlier, the organization reported 34,000 people being displaced by the battle.

Most of those displaced were from the Nineveh province, of which Mosul is the capital. In a report issued last night, the United Nations human rights agency said its humanitarian partners had distributed food, water and medicine to residents and people fleeing the war.

Mosul is the last IS-held city in the area and used to be the militia's de facto capital when it took over parts of Iraq in 2014. Aid organizations have warned that fighting around the city could displace up to a million people in the area.

The Iraqi offensive to regain control of the city involves a 100,000-strong alliance of army soldiers, Kurdish peshmerga fighters and Shiite militias backed by the US. Washington has also provided air support for Iraqi's army. Earlier this week, Iraqi soldiers discovered a mass grave in a nearby town called Hammam al-Ali as they were advancing towards Mosul. The graves behind an earthen embankment near an agricultural college, held around 100 bodies, mostly decapitated, army officials said. It was unclear who the victims were, but soldiers found a child's stuffed animal and scraps of clothing.

During their two-year rule, IS militants exterminated dozens of people in southern and central Iraq. The UN's human rights agency said it was investigating reports that 50 former Iraqi soldiers had been massacred in a building outside Mosul city, spokeswoman Ravina Shamdasani told reporters.

US concerned after 13 Chinese warplanes fly over Taiwan airspace