Some 100 decapitated bodies have been discovered on the outskirts of Mosul, said Iraq's army. Baghdad has launched a military campaign to liberate the city from the "Islamic State" militant group. 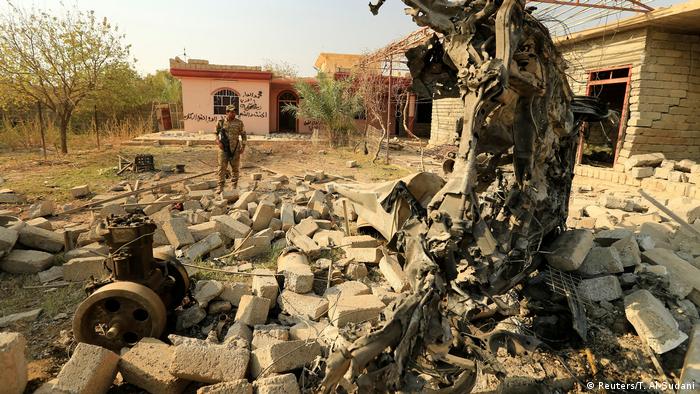 A member of Iraqi security forces inspects a wreckage of a vehicle destroyed by clashes in Hammam al-Alil, south of Mosul, during an operation to attack "Islamic State" militants in Mosul

In a rare speech, the militant group's chief Abu Bakr al-Baghdadi has called for fighters to stand their ground in Mosul. DW spoke to Hassan Hassan, co-author of "ISIS: The Army of Terror," to examine the implications.

"Iraqi forces found … 100 bodies of citizens with their heads cut off" at an agricultural college, a statement from the armed forces said.

Rasool added that it was not possible to immediately identify whether they were the bodies of soldiers or civilians.

A forensics team from the capital Baghdad will investigate the site on Tuesday.

In June, Iraqi forces discovered a mass grave containing the remains of approximately 400 people near the city of Fallujah during an offensive to recapture the city from the "Islamic State."

The operation to liberate Mosul has brought together an alliance of 100,000 fighters led by the Iraqi army, including the Kurdish peshmerga and Shiite militias backed by US-led airstrikes.

However, the alliance has only gained a small foothold in Mosul since launch its campaign.

Shortly after capturing the city in June 2014, "Islamic State" leader Abu Bakr al-Baghdadi announced the establishment of a so-called "caliphate" from the pulpit of a historical mosque in the predominantly Sunni Muslim city.