Teacher for a day: Vladimir Putin lectures Russian schoolchildren | Europe| News and current affairs from around the continent | DW | 01.09.2017

Russian President Vladimir Putin has kicked off the new school year by teaching a lesson himself. Ahead of upcoming elections, it could be an attempt to show the Kremlin hasn't lost control of young people. 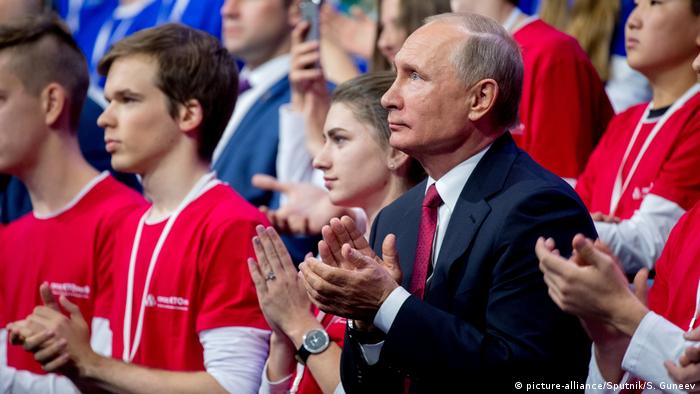 The first of September is a day of celebrations in Russia. It's traditionally the first day of the new school year. Children come to school in their very best clothes, carrying bouquets of flowers for their teachers. The younger girls tie white ribbons in their intricately braided hair. The day is officially known as the day of knowledge, and pupils often have general lessons on values - like the importance of world peace - rather than subject-specific classes.

This year, Russian President Vladimir Putin himself gave such a lesson. Putin taught his lesson at a school in the city of Yaroslavl, but his "open lesson" was reportedly shown in other schools in cities across the country, as well as on social media. The broadcast also included talks from various Russian heads of business.

The first half an hour of the lesson was billed as his "main lecture" - Putin's big moment to speak directly to young people. He discussed Russia's future in business innovation and the country's place in the world and called upon the students to be "fundamentally better" than previous generations.

"Look at what's happening around the world. We always say that Russia is a large and great country. And this is true," Putin said as part of the lecture. 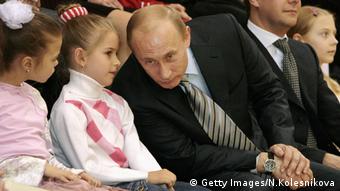 Putin has met with Russia's new generation throughout his career

Putin has visited a school every year on September 1. But this visit comes just ahead of regional elections in September as well as the official launch of the presidential election campaign. The election itself is slated for March 2018. "Of course this is part of his campaign, there is no doubt about that," said Alexander Baunov, a senior fellow at the Carnegie Institute in Moscow, before the lecture took place.

Baunov pointed out Putin's tactic at public meetings and his annual call-in show has changed over his years in power. He used to use them to "show his effectiveness, the fact that he understands people's problems and can solve them effectively."

Baunov sees this event as part of a new trend. Putin has begun to use public meetings to allow the "people to understand the president himself - his historical significance, his [moral] rectitude, his views of the world." Usually it is personalities like cosmonauts, war veterans or well-known actors who teach lessons like the one Putin gave at the beginning of the school year, the analyst adds.

A push for Russia's young generation

Still, it seems Putin is particularly keen on connecting with Russia's younger generation ahead of upcoming elections. It's not the first time he has made a special effort to address young people recently. In July, Putin visited Sirius, a school for gifted children in Sochi, for a question and answer session. The meeting was broadcast live on state television. The questions were largely apolitical, touching on topics like Putin's private life and hobbies, his childhood memories. Putin mused that his "working days usually end so late, that I don't have time for Instagram" and told listeners that his three main values are "life itself" as well as "love and freedom." 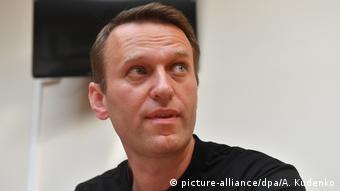 That question and answer session garnered particular attention because it took place just a few months after thousands of people took to the streets across Russia to protest corruption on March 26, 2017. Many of those demonstrating were young, and many had heeded the call of opposition figure Alexei Navalny, who had accused Russian Prime Minister Dmitry Medvedev of mass corruption in a viral YouTube video. Navalny is also planning on running for president in 2018, though it remains unclear whether he will be allowed – due to a criminal case against him. There was no direct mention of Navalny's corruption accusations in Putin's meeting with pupils at Sirius, though the president was asked about his assessment of "certain opposition personalities" at one point.

Still, Putin's visit to the school in Sochi "looked a bit like an answer to the youth protest in Moscow and the provinces," said Carnegie's Alexander Baunov. But he explained the meeting in July also made Putin look a bit out of touch. "He wanted to present himself as a mature, adult mentor, but it simply seemed that he wasn't talking to them about what they wanted to hear."

Social media users were keen to compare how many views Putin's conversation with students in Sochi got on the state television channel NTV's YouTube channel with the views one of Alexei Navalny's videos on his own YouTube channel got.

A lesson, not a dialogue

Carnegie's Baunov thinks that perhaps getting through to young people isn't Putin's only goal. After all, this meeting was billed as a lesson, rather than a dialogue - even though the president also took questions. 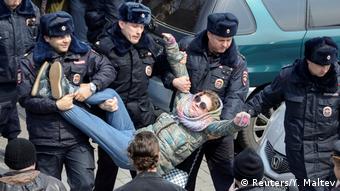 Hundreds of protesters, including young people, were arrested during anti-corruption protests

Instead, perhaps the government is trying to change the young generation's image. "The wish to hold an open lesson can be seen as a response to the discussion about whether the Kremlin has lost control of young people," Baunov said. "Putin is showing that there is also another type of young people - upstanding young people, creative young people. People who don't find their fulfillment in protest."

And recent polling ahead of the upcoming elections confirms that a majority of young people are not as anti-Kremlin as they might have seemed in Navalny's anti-corruption protests. In a survey published on August 29, the government pollster FOM (Public Opinion Foundation) found that 65 percent of people surveyed have a largely positive attitude towards the president - including 58 percent of those between 18 and 31.