Taliban advance causes disappointment in Afghan government | Asia | An in-depth look at news from across the continent | DW | 13.08.2018

As battle between government troops and Taliban militants rages in the eastern city of Ghazni, Afghans criticize President Ashraf Ghani's administration for having failed to protect the city and its residents. 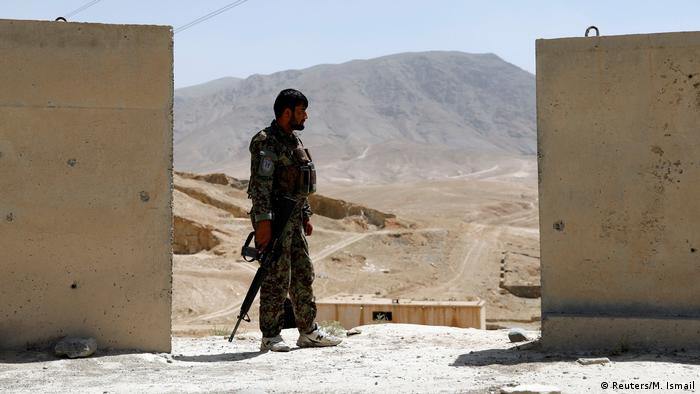 For the fourth straight day, Afghan security forces have been fighting the Taliban in Ghazni, a key provincial capital in the east of the country. The insurgents have been attempting to seize control of the city since Friday.

The Taliban launched a massive assault on the city last week, which is a strategic center on the main highway linking the capital Kabul with southern Afghanistan.

Heavy fighting is taking place between Afghan government forces and militants. With government buildings and police headquarters under attack, multiple accounts suggest the city is largely controlled by the Taliban.

The attack is a major blow to President Ashraf Ghani and his government in the run-up to parliamentary elections, scheduled to take place in October.

It's reported that Taliban fighters surprised government security forces with their attack, which has so far killed at least 100 Afghan policemen and soldiers.

However, on Monday, Afghan Defense Minister Tariq Shah Bahrami and Interior Minister Wais Barmak said the situation was under control. "We have lost a number of men, but the number of causalities on the side of our enemies is four times larger," Bahrami told reporters during a press conference.

The defense ministry claims the number of civilian causalities is between 20 and 30. Around 200 Taliban, including Pakistani and Chechen fighters, were supposedly killed. Both ministers said they are hopeful security forces will regain control of the city within the next 24 hours.

Read more: UNICEF: Nearly half of children in Afghanistan do not go to school

But the reality on the ground appears different. The UN Office for Coordination of Humanitarian Affairs said they have received reports of people trying to reach safe areas outside the city.

"Residents of Ghazni have seen their city turn into a battlefield since Friday morning, with fighting and clashes reportedly still ongoing," Dr. Rik Peeperkorn, UN Humanitarian Coordinator for Afghanistan, said in a statement.

According to the UN, the hospital in Ghazni is running short of medicines and residents don't have much food. Many families have reportedly taken shelter in their houses and are unable to leave. Vital telecommunications networks and the electricity supply are down, which has impacted water supplies in the city of 270,000 people.

Many Afghans are worried about their relatives, but are unable to contact them, since telecommunications are down.

Rahmatullah Alizada, a resident of Ghazni who lives in Kabul and has had no news about his family, told DW that he was very worried. "On social media I have seen videos of Taliban fighters close to our home," he said. "From this I am assuming that they have taken these parts of the city."

'The government has failed'

Many Ghazni residents reportedly feel disappointed by the government and are angry about the response to the attack and the ongoing battle. Some say they have been warning the government for months, but their concerns were not taken seriously.

"No one listened to our complaints," said Nasir Ahmad Faqiri, a member of the provincial council of Ghazni. "We were told that the government has been sending reinforcements, but no one in Ghazni has seen anything like that so far," he said, adding that what they have witnessed in recent days is "pure horror."

"With every moment that passes, the situation is becoming more conflicted and we are getting closer to losing the city," he said.

"A defense ministry should be the war ministry. National security and its preservation through information are their duties. They should have obtained the information about the movement of the Taliban, so that the current situation could have been prevented in the first place," he added.

Ghazni is located on a key highway linking Afghanistan's two largest cities, Kabul and Kandahar. An insurgent takeover of the city would mark a major defeat for the Afghan government. The Taliban have been attacking various districts of the Ghazni province for weeks.

Are Taliban and Kabul teaming up against 'Islamic State'?

Despite the bloody war between the Afghan government and the Taliban, the two share a common enemy: the "Islamic State." This has led to some inadvertent cooperation between both sides. (03.08.2018)

Accused of rape and torture, Abdul Dostum, a notorious warlord and Afghanistan's vice president, has returned from exile. He was greeted in Kabul by throngs of supporters — and a deadly bomb attack. (23.07.2018)

A young Afghan asylum-seeker, wrongfully deported from Germany in July, has been brought back from Afghanistan. His case is the latest in a series of wrongful deportations. (13.08.2018)