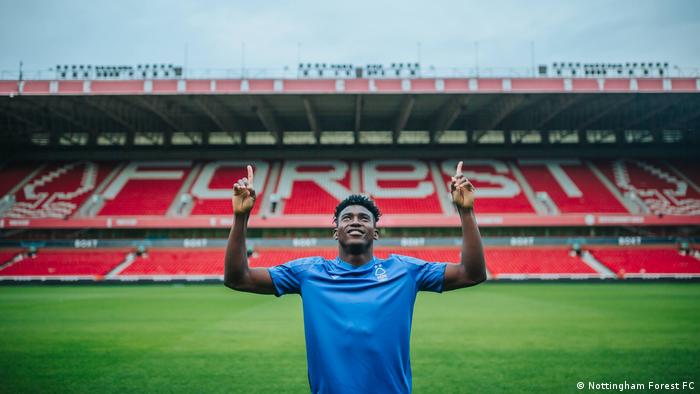 In his two seasons in Berlin, Awoniyi became a fan favorite

"The Premier League is my dream," Taiwo Awoniyi told Germany's Kicker magazine back in February. "Everyone knows that."

Now, after three seasons in the Bundesliga with Mainz 05 and Union Berlin, that dream has come true for the 24-year-old Nigerian striker, whose long-mooted move to Nottingham Forest was confirmed on Saturday.

Awoniyi has signed a five-year-deal at The City Ground for a transfer fee reported to be around €20.5 million ($21.6 million), making him Union Berlin's most lucrative sale ever. It was also a record signing for Forest, who secured promotion back to the Premier League last season for the first time in 23 years.

"I'm very excited to be here at Nottingham Forest," Awoniyi told Forest's official website. "It's always been my dream to play in the Premier League and having spoken to [manager] Steve Cooper about our ambitions and looking at Forest, with its great history, it's a club that I want to be part of."

Awoniyi has already been under contract at one Premier League club, having signed professional forms with Liverpool back in 2015. But he never made a first-team appearance, instead being sent on loan to FSV Frankfurt, NEC Nijmegen, Mouscron, Gent, Mainz and, finally in 2020, Union — who made his move permanent last summer.

In two seasons in Berlin, Awoniyi made 65 appearances for the "Irons," scoring 25 goals and assisting nine more, meaning he was involved in a goal every second game on average.

"Union put their trust in me right from the start, and I've always felt at home here," he told Union's club website. "I've had the opportunity to develop myself and, thanks to my teammates and the coaching staff, celebrate great successes. Union will always have a place in my heart. I'm very happy and proud to have been part of this club."

Awoniyi quickly became a fan favorite at Union Berlin, his name regularly ringing out from the terraces of the Stadion an der Alten Försterei— the stadium at the Old Forester's House.

However, according to Union director of sport Oliver Ruhnert, it was "clear that a player like Taiwo would attract the attention of other clubs with his performances." Awoniyi himself confirmed earlier this season that he had indeed received inquiries.

Union reportedly placed a €30-million price tag on his head but, despite settling for almost €10 million less in the end, it still represents a decent return on their €6.5 million investment when they signed him permanently from Liverpool.

"It is a nice sum, it has to be said. For us, this would be a sale of a whole different dimension," Ruhnert told DAZN at the time, knowing full well that the time would come to sell, cash in and refresh.

"Both as a player and as a human being, he will be a big loss for our team," said Ruhnert. "Still, we wish Taiwo all the best." 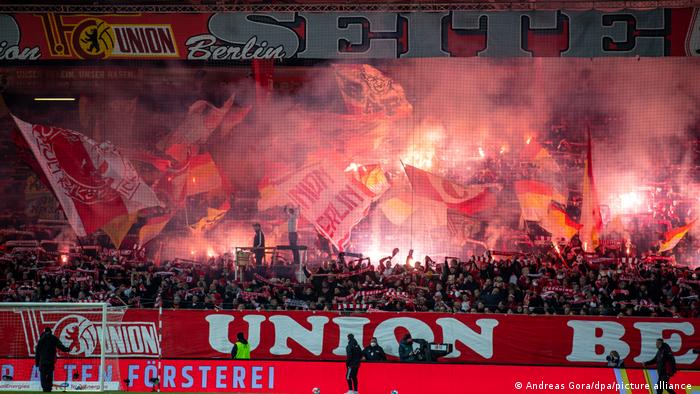 Awoniyi started out playing under Garba Abdulrasaq Olojo at the Unicorn Soccer Academy in Ilorin, the capital of Nigeria's Kwara State.

His parents were not keen on him playing football at the beginning, but eventually became convinced of his abilities. Awoniyi has referred to Olojo as the most important person in his decision to pursue football as a career, a choice that has taken him from humble beginnings.

"When you have a kid with you, in a job you're experienced in, you'll understand how to recognize good talents. We worked hard on them because you know when you do that, they'll go far in their careers," coach Olojo told DW in a recent interview.

"He learned how to sew his boots by himself and got to the field very early with his colleagues. They bought mending tools. Those were the challenges he faced with me. His parents supported him greatly too," he said.

It was while playing with the academy that Awoniyi was noticed by U-17 selectors and was chosen to play in the Nigeria U-17 team that won the FIFA U-17 World Cup in the United Arab Emirates in 2013. Afterwards, Awoniyi was signed by Liverpool but never made an appearance for the Reds.

Due to a lack of a work permit, he was sent out on loan to Mainz 05, FSV Frankfurt, Mouscron, Gent and NEC Nijmegen before he found a home at Union under head coach Urs Fischer, who Awoniyi has described as a "father figure."

Fischer saw the potential in the Nigerian in his first season on loan when he scored five goals, and took him on a permanent contract. He rewarded that faith by helping Union qualify first for the UEFA Conference League and then for the Europa League. He also made his senior Nigeria debut in October 2021 under former coach Gernot Rohr in a match against the Central African Republic before playing at the Africa Cup of Nations in January.

"Now everybody knows that he's a good player, that he scores the goals. You see the statistics, they are very good. He's scoring one goal every other game. Even in European Cup, he scored. He can get more experience, international experience, and he's still very young," Rohr told DW. 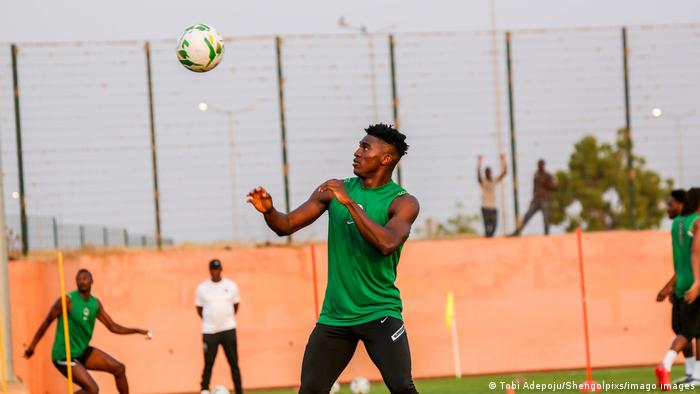 Dream of the Premier League

Awoniyi has always had his eyes on playing in the Premier League — for personal reasons, too.

"If I lived in England, it would be easier for my wife and child, and for myself because of the language," he told Kicker. "Also, my sister and a brother live there."

It's been a long road, culminating in a fruitful sojourn in Berlin, but that dream is now a reality. Not that anyone at Union ever doubted it — not the fans, not the club and certainly not Awoniyi himself.

This article was originally published on April 8, 2022 under the headline: "How Taiwo Awoniyi became Union Berlin's unicorn." It was updated on June 25 to reflect Awoniyi's move to Nottingham Forest.

Union Berlin claimed another big-name casualty as their extraordinary Bundesliga season continues. This time it was the turn of Bayer Leverkusen to taste defeat at Union, whose hero was almost the villain.

The Bundesliga title race took on a whole new dimension after matchday 11. There's a new team at the top, Lucien Favre was fired as Borussia Dortmund head coach and Bayern Munich salvaged a point in Berlin.