Taiwan′s LGBTQ still struggling for equal marriage rights | Asia| An in-depth look at news from across the continent | DW | 26.06.2018

It's been a year since a landmark ruling in Taiwan recognized same-sex unions as a fundamental right. But the marriage equality movement still faces stiff resistance in Taiwanese society. William Yang reports. 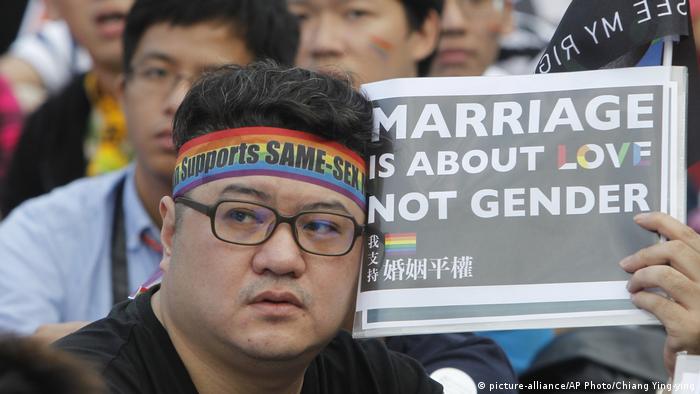 When Taiwan's Constitutional Court decided to recognize same-sex unions in May 2017, the decision wasn't just a watershed moment at home. It made the island the first Asian territory to legalize same-sex marriage. With the court's ruling, Taiwanese authorities were granted two years to either amend existing marriage laws or enact new legislation: one year on, neither has happened.

Instead, three anti-marriage equality referenda were approved by the Central Election Committee in April this year. This was initiated by a coalition of conservative and pro-status quo groups who contend that it is the public — and not the court — that should have the final say on this issue.

Consequently, Taiwan's pro-marriage equality camp has been forced to embark on countermeasures to secure the inroads made by the LGBTQ community in achieving equal marital rights in Taiwan.

No different from others

According to Jennifer Lu, the MEP's general coordinator, regular exchanges with marriage equality organizations in the United States, Ireland and Australia have taught the coalition how to effectively communicate with a wide range of audiences.

The MEP has started to design awareness campaigns that aim to garner support among regular citizens. Unlike past campaigns that mainly emphasized the MEP's core values, the coalition has now produced videos that feature LGBTQ individuals in conventional family settings and who speak to audiences from this perspective.

Lu believes that this strategy helps to form a personal connection between marriage equality and individuals, and it has proven effective in other countries that have legalized same-sex marriages. "The new strategy would have been considered too conservative by LGBTQ activists in the past," Lu told DW.

"They would have preferred to clearly explain the core values of the movement to the general public, but our experiences in the past few years have helped us realize that it is a more idealistic way of organizing social movements. The new strategy is an important lesson that we've learned from other foreign organizations, and we will try to apply it to the referenda that we are planning."

Despite the legislative stagnation, LGBTQ activists from the United States and Australia both recognize how extensive public discussions facilitated by Taiwan's marriage equality movement have helped to create a conducive climate for Taiwan to fulfill the Constitutional Court's promise of individual dignity and equal respect for everyone.

"The public discussions have created momentum for the growing understanding of who gay people are and why marriage equality matters," said Evan Wolfson, the founder of Freedom to Marry and a long-time LGBTQ rights activist in the United States. "It also helped build support for the fulfillment of democratic guarantees that is important to all people in Taiwan."

However, Wolfson points out that the current administration and ruling party's failure to fulfill the constitutional court's ruling has allowed the opposition to organize another wave of what he describes as "disinformation campaigns," aimed at undermining the progress achieved by the public discussions, and has further injected divisiveness into Taiwanese society.

"The elected officials have made a big mistake by not taking action to do the right thing quickly," Wolfson told DW. "And as a result, now there is a damaging divisiveness that's being pushed by the forces that don't really care that it hurts Taiwan to be dragged backwards in the eyes of the world."

Alex Greenwich, an MP in Australia's New South Wales state parliament and the co-chair of Australia Marriage Equality, has experience in dealing with disinformation campaigns and an attempted popular vote to halt the legalization of marriage equality in Australia.

He stresses that the key to the success of the pro-LGBTQ rights campaign in Australia was to focus on the people who are at the center of the struggle and to put a face to this long-oppressed community.

"I think the learning for us from it was to always stay positive and [focused,]" Greenwich told DW. "What we were trying to achieve was basically to allow happy couples to get married without taking anything away from anyone."

Greenwich thinks that the success of the grassroots campaigns organized by the MEP, as well as last year's Constitutional Court ruling, should be able to encourage supporters of marriage equality to move forward while preparing for new challenges.

"I think the campaign should have great faith in their abilities, and also celebrate the fact that they are providing hope to the region," said Greenwich.

Awareness through dialogue and storytelling

Observers say that with local elections slated for late 2018, it's highly unlikely that a same-sex marriage bill will be passed anytime this year, given that a substantial part of the populace still opposes it.

As the opposition wants to push the issue of same-sex marriages high on the public agenda in the run-up to the November election, Wolfson says that the MEP should focus on their core message and try to initiate dialogues that can help non-LGBTQ individuals better understand why marriage matters to LGBTQ individuals.

"[The coalition] should talk about love, and the best messenger may often be non-gay and non-trans people helping explain why [legalizing marriage equality] matters to them," Wolfson explained.

And to prevent society from being divided by the opposition's disinformation campaign, Greenwich suggests that the MEP should focus its message on uniting Taiwan, emphasizing that treating everyone equally under the law is important.

"Storytelling is very important and the [coalition here] should magnify it through various platforms," Greenwich told DW.

As the MEP plans to thoroughly implement the strategies shared by their counterparts abroad, Lu said that they will start actively communicating with non-LGBTQ individuals who share the same values of fairness and respect, while collaborating with local groups across Taiwan to customize strategies for different regions.

To stimulate more discussions and increase pressure on the government through the international community, the coalition will keep partnering with rights groups and government agencies from foreign countries.

Chinese Twitter-equivalent Weibo has reversed a clampdown on gay content. Outraged LGBT users accused Weibo of lumping homosexuality with violence and pornography in its attempt to target vulgar material. (16.04.2018)

Gay rights activists have marched in an annual parade in India's capital, New Delhi. The event drew attention to the still prevalent discrimination against homosexuals in the country. (27.11.2016)