Reaching professional football makes Türkgücü Munich Germany's most successful immigrant club. The ambitious side's success and shifting identity on the field has been matched by unique challenges off it. 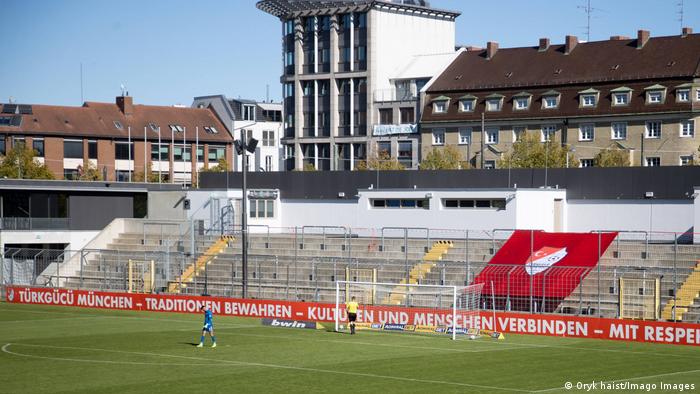 German third division newcomers Türkgücü Munich have already strung together some eyebrow-raising results. Undefeated and in sixth place, their first three matches include a compelling draw against reigning-champions Bayern Munich II and a dominant win against former Bundesliga giants Kaiserslautern.

Such sterling form would be impressive for any newly-promoted club, but regardless of where Türkgücü land at the end of the season, they've already made history. This season in the 3. Liga makes Tükgücü Germany's first ever immigrant club to play at the fully professional level.

Founded by Turkish immigrants in 1975, Türkgücü (which means Turkish power) have strong Bavarian roots, which are represented by the club's crest: a half-half of the Turkish and Bavarian flags. Their moto: "Preserving traditions, connecting culture."

They are one of hundreds of ethnic and immigrant clubs in Germany - the only of these sides to previously come close to professional football was Berlin's Türkiyemspor, who fell just short of promotion into the second tier in 1991. Türkgücü are riding a dizzying wave of success, reaching the 3. Liga after three consecutive promotions.

Though many would be content with such an accomplishment, long-time fan Haki tells DW he only expects the success to continue. "Our goal is to be the second team in Munich after Bayern and to play in the Champions League one day."

Türkgücü are also making an impact off the pitch, providing representation and a shared sense of community for Munich's sizeable Turkish population. In fact, the club sees all of Germany's nearly 3 million residents with Turkish descent as potential supporters. Türkgücü hope their unique identity can lead to countrywide support.

"When fans can attend matches again, I think all of our away games will be home matches. Regardless of where we are playing, I think we're going to have more Turkish supporters than the home team has fans. That's an advantage that we have to put to use, which is truly unique about this project," says Roman Plesche, who heads up Türkgücü's player acquisition and squad building.

With packed stadiums around Germany and Champions League football apparently on the horizon, Türkgücü certainly don't lack ambition. But the club's identity has already made a mark, even on the players.

"I'm from Munich but I have a Turkish background," says midfielder Ünal Tosun, Türkgücü's longest-serving player. "I can 100% identify with the club, it's a perfect match." 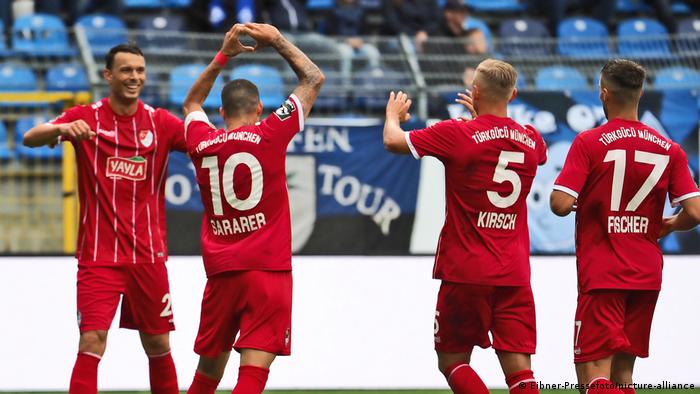 Türkgücu Munich players celebrate a 2-1 win away at Mannheim

In the years prior to Tosun joining the club in 2018, Turkish and Turkish-German players dominated the roster. But Türkgücü's squad has become significantly more international after whirlwind turnover in recent years, making players like Tosun, who directly identify with the club's name, increasingly rare.

"It's a Turkish club, but success is most important. That comes first," insists Plesche. If possible, he does try to stick to Türkgücü's roots when building the roster. "If you've got someone named Müller and a Turkish or Turkish-German player, and the quality is the same, we'd probably sign the Turkish player."

Türkgücü's roster overhaul has accompanied the club's growth. Signing 16 new players this season reflects standard offseason procedure. Many of the new faces bring with them substantial experience of professional football and command comparatively high salaries for the division.

All of this has been bankrolled by investor and president Hasan Kivran, who was born in Turkey and heads an investment management agency. Kivran has long lived in Germany and played for Türkgücü in the 1980s. He has reportedly spent more than one million euros of his own money since joining the club in 2016.

Though his support doesn't break the parameters of the 50+1 rule, his heavy-handed influence on the club and big spending has sparked criticism. 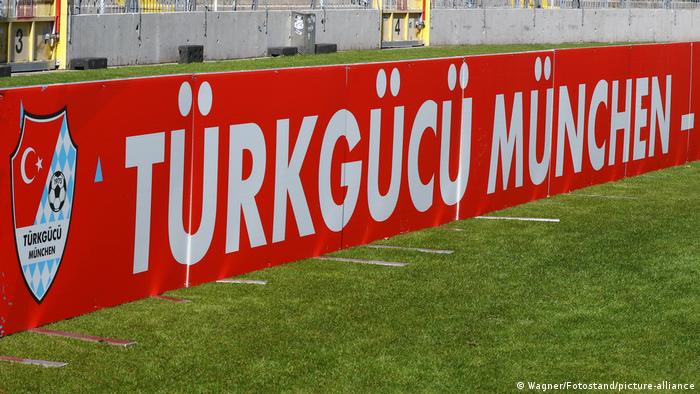 Türkgücü's club crest combines the flags of Turkey and Bavaria.

A target for racist fans

Skirting Germany's fan-forward ownership structures is not the only aspect of the club that has drawn ire. Immigrant clubs like Türkgücü face unique challenges, and their very existence enrages a small set of fans.

"Türkgücü München, the name alone and that we're the first club founded by immigrants to reach the pro level is polarizing. It's definitely brought attention," says Tosun. With German football unfortunately not immune to broader social issues, including racism, Türkgücü's success has put them on the map for intolerant fans as well.

The far-right organization 'Der III. Weg', which has links to German football's right-wing hooligan scene, has protested against Türkgücü's appearance in the professional leagues, since the Munich club doesn't fit into their racist view of German football. "I don't think it matters to the average German, but there are definitely some Germans who are really bothered by the fact that we've gone up and made it this far," reflects Haki.

For Türkgücü supporters, the club provides a sense of pride and representation for a community that has long been an important part of German society. Though an undesirable minority might criticize the club for racist reasons, many football fans will be looking on with interest at what the country's first ever immigrant club in professional football can accomplish.

Unsurprisingly, Roman Plesche is optimistic. "We're proud to play in this division. I think we've got a strong team, and I think some of the clubs at this level will soon see what's coming their way." Though Türkgücü's ambition can seem over the top, it is hard to argue with a side which is coming off the back of three consecutive promotions.

Maybe they can even make it four?