The young girl who became the voice of the children trapped by Syria's war has been safely evacuated to Turkey. She and her family were received by President Erdogan in Ankara. 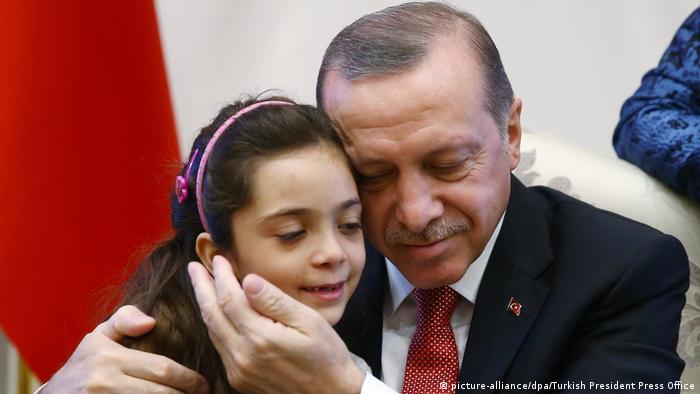 The seven-year-old Syrian girl who gained the world's attention with her tweets from the embattled city of Aleppo met Turkish President Recep Tayyip Erdogan on Wednesday. Erdogan was quick to post photos of himself and Bana Alabed after she was safely evacuated to Turkey.

Bana and her mother Fatemah, who helps her daughter with the famous @AlabedBana account, were hosted by the president at his palace in Ankara. "Turkey will always stand with the people of Syria," said Erdogan's official Twitter account.

The young girl has gained hundreds of thousands of followers on the social media platform after she began uploading harrowing updates of life in Aleppo. She began using Twitter in September, documenting what it was like for civilians as government troops launched their renewed offensive to push rebels out of the city. For many, she was the face of all the children caught up in Syria's violence, as she wrote about how the battle for Aleppo affected her desire to read Harry Potter or play with her toys.

"This is my friend killed by a bomb tonight. I can't stop crying," she wrote on Twitter at the end of November, accompanied by a disturbing picture of a child bleeding.

Despite allegations that the account was fake, several media outlets and Twitter itself had already verified Bana's authenticity before she was evacuated alongside 25,000 others out of eastern Aleppo this week.

Amongst the 300,000 who have lost their lives in Syria's nearly six-year civil war, 15,000 of them were children. In their last tweet before leaving Aleppo, Bana's mother Fatemah called on Erdogan and Turkey's Foreign Minister Mevult Cavusoglu to bring the country's fragile ceasefire between regime soldiers and moderate rebels back on track.

The evacuation of residents from east Aleppo resumed after rebels reached an agreement with the Syrian government. The evacuation is expected to be complete in a few hours. (21.12.2016)

The UN Security Council has voted unanimously to approve a joint text from France and Russia for UN observers to monitor the evacuation of civilians from Aleppo. Tens of thousands have left since the weekend. (19.12.2016)

Buses on the way to evacuate civilians in besieged areas of Syria have been attacked. Despite the incident, around 350 people were able to leave a rebel-held area of east Aleppo late Sunday. (18.12.2016)