The UN Security Council has voted unanimously to approve a joint text from France and Russia for UN observers to monitor the evacuation of civilians from Aleppo. Tens of thousands have left since the weekend. 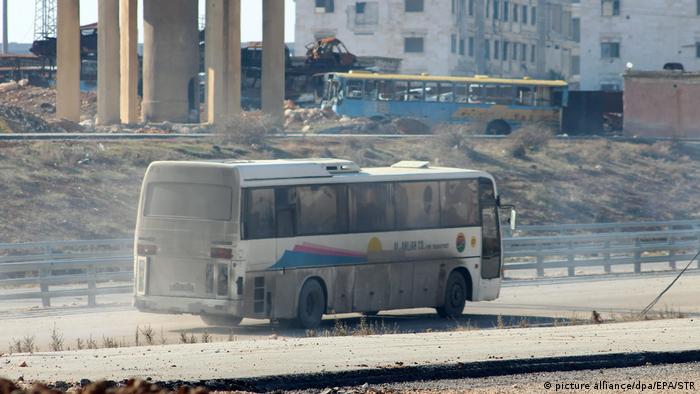 The vote in the United Nations Security Council was passed unanimously on Monday after a delay following a threat from Russia to veto the original resolution proposed by France. The measure tasks the United Nations with carrying out "adequate, neutral monitoring and direct observation on evacuations from eastern Aleppo and other districts of the city."

A compromise was reached between France and Russia on the wording of the resolution so that it would allow the monitors to observe after consultations with "interested parties." The United States said it had been expected to pass unanimously.

The resolution may allow a number of groups on the ground, including Syrian soldiers and the Shiite militias fighting alongside them, as well as fighters from an array of rebel groups, including extremists, to block access to areas they control.

French Ambassador Francois Delattre said the international presence would prevent Aleppo from turning into another Srebrenica, referring to the 1995 massacre in Bosnia. "This is a starting point," Delattre told reporters. "We will be extremely attentive, extremely vigilant."

After waiting in below-freezing temperatures and wet, wintry conditions, thousands of civilians have been evacuated out of eastern Aleppo in Syria.

Convoys of buses reached rebel-held areas to the west of the city, according to a UN official and the Syrian Observatory for Human Rights, a monitor based in the UK. Around 5,000 people traveled in 75 buses out of Aleppo on Monday, according to Ingy Sedky, spokeswoman for the International Committee of the Red Cross (ICRC).

Turkish Foreign Minister Mevlut Cavusoglu said some 20,000 civilians had been evacuated from Aleppo so far. The United Nations said nearly 50 children, some critically injured, had been rescued from eastern Aleppo, where they had been trapped in an orphanage.

Ahmad al-Dbis, who heads a team of doctors and volunteers coordinating evacuations, said the people were in "a very bad state after waiting for more than 16 hours" at a regime checkpoint without being allowed off the buses.

"Complex evacuations from East Aleppo and Foua & Kefraya now in full swing. More than 900 buses needed to evacuate all. We must not fail," Jan Egeland, who chairs the United Nations aid task force in Syria, reported via social media.

According to the ICRC and the Syrian Observatory for Human Rights, around 500 people left in a dawn convoy from Foua and Kafraya, loyalist villages in the mostly rebel-held Idlib province, which have been under siege by extremists for almost two years.

Among those evacuated from eastern Aleppo to a rebel-held area farther west was 7-year-old Bana al-Abed, whose Twitter posts with her mother throughout the siege by government forces helped draw attention to the plight of civilians.

The foreign and defense ministers of Russia, Iran and Turkey are to hold talks in Moscow on Tuesday aimed at giving fresh impetus for a resolution in Aleppo.

Putin said he hoped the two could work together for a resolution to the Syria crisis as soon as possible.

The Russian president has previously said he wanted to see new Syrian peace talks involving the Syrian government and the opposition. He is trying to build support for the talks, proposing they take place in Kazakhstan.