Syria's neighbors no longer have the capacity to take in refugees from the Middle East war, according to high-ranking regional officials. Jordan, Lebanon and Turkey have appealed for greater international assistance. 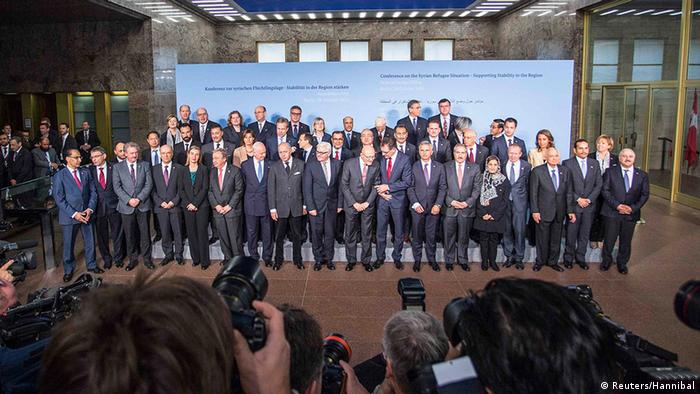 Lebanese Prime Minister Tammam Salam told a conference in Berlin on Tuesday that his country was overwhelmed by the refugee influx from Syria, warning of violence and political de-stabilization if the world didn't do more to ease the humanitarian crisis in the Middle East.

"The massive influx of Syrians into poor communities totally unprepared to cope with such a sudden burden has had been destabilizing, with such a variety of challenges and threats that constitute a fertile ground for extremism and violence," Salam told representatives from 40 nations, who were meeting in the German capital to discuss the refugee crisis.

With a population of 4.5 million, Lebanon has taken in more than one million refugees since neighboring Syria descended into civil war in 2011. Jordan's foreign minister echoed Salam's warning, saying that Amman was nearly at the point of exhaustion. The Hashemite Kingdom has taken in some 619,000 Syrian refugees.

"We are approaching host-country fatigue in which the limit of our ability to address the needs of Syrian refugees is being tested and has already been reached," Nasser Judeh said.

Turkey's deputy foreign minister, Naci Koru, told the Berlin conference that the world had to contribute more money to the humanitarian response. According to Koru, Ankara has spent $4 billion caring for more than one million Syrian refugees, but has received only a $250 million reimbursement from the international community.

Aid groups have said that donor nations must double their financial contributions in order to meet the needs of the more than three million officially registered Syrian refugees. But German Foreign Minister Frank-Walter Steinmeier, who organized the conference, said the funding also had to be managed appropriately.

"This is not only a question of more money," Steinmeier said. "We also need to use the funding more effectively and more sustainably."

Top diplomats from 40 countries are expected in Berlin on Tuesday for an international conference dealing with Syria's refugees. The situation in neighboring Lebanon, Jordan and Turkey is on the verge of collapse. (27.10.2014)