A German military Airbus is due to fly 36 people severely wounded in Syria from Jordan for further medical treatment at clinics in Germany on Monday. Berlin says the transfers were requested by Syria's opposition. 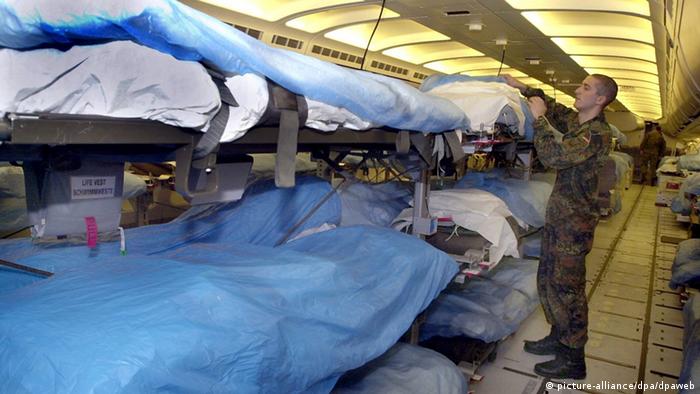 The German Foreign Office said the specially-equipped military Airbus would first land patients in Stuttgart and then in Cologne, Hamburg and Berlin for transfer to adjacent clinics of the German armed forces, the Bundeswehr.

Foreign Minister Guido Westerwelle described Germany's reception of the wounded - the first major group of patients from Syria to be transferred to Germany - as an act of solidarity with the Syrian National Coalition opposition.

The cost amounting to several million euros would be absorbed by the German Defense Ministry and Westerwelle's ministry, according to the Foreign Office.

It said the medical flight had been requested by the opposition and added that for Syrians the National Coalition was developing "more and more into a visible, plausible alternative" to the regime of Syrian President Bashar al-Assad.

As war rages in their country, thousands of Syrians seek shelter in neighboring nations, where they are helped by international organizations. But the rising number of refugees is stretching resources thin. (28.03.2013)

The Süddeutsche quoted Westerwelle as saying that Germany was "deeply affected by the thousands of dead and the still bigger number of wounded which the terrible civil war in Syria has claimed up to now."

"We want to enable a quick and as complete as possible recovery here in Germany for some of the worst injured victims of the war with the relief action now beginning," he added.

The two-year-long conflict in Syria between rebels and al-Assad's forces has claimed at least 70,000 lives, according to United Nations estimates.

Another airstrike on the Damascus neighborhood of Qaboun killed at least nine people, the Observatory said.

The Syrian state news agency SANA said "terrorists" had fired mortar rounds at a bus station in the Damascus suburb of Jaramana, killing four people and wounding 20 others.

Independent verification of casuality figures is severely hampered by media restrictions inside Syria.

US state capitals brace for pro-Trump demonstrations 42m ago