Syrian poet Adonis has defended himself against critics questioning his relationship to the Assad regime. Adonis will be awarded the German peace prize named after the pacifist writer Erich Maria Remarque on Friday. 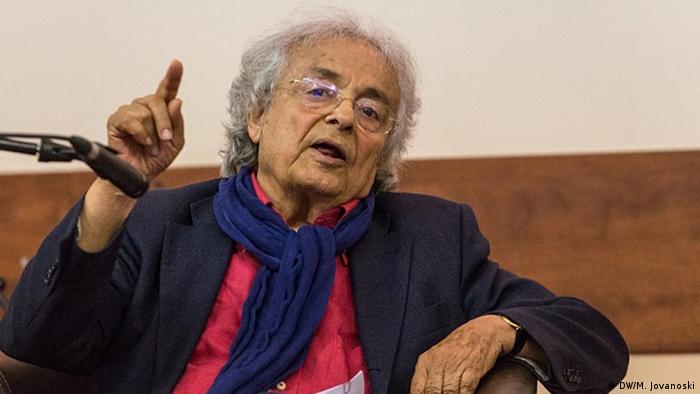 "I wrote a letter in which I asked the Syrian ruler to step down from power. What more can I do?" Ali Ahmad Said, who uses the pen name Adonis, asked at a press conference on Thursday (18.02.2016) in Osnabrück, where he will be receiving the Erich Maria Remarque prize. "I have spent my whole life fighting this dictatorship," Adonis added.

Literarily, Adonis never budged. For decades, he has shaped the avant-garde poetry scene not only in Syria, but in the entire Arab world.

With his poems, Adonis embodied the modern Arab intellectual that was so beloved in the West. From the European point of view, he represented the unspoken hope that the region would one day drop its religious rules and open up to what the West defines as its core value: reason.

It was assumed for a long time that Adonis embodied modernity not only from a literary perspective, but also politically. For that reason, he has already received numerous awards in Europe. In 2001 he was awarded Germany's Goethe Medal for intercultural understanding and in 2013 the Petrarca Prize for contemporary poetry.

In 2011, the city of Frankfurt presented him with its Goethe Prize. But even then, the accolade gave rise to unease. Critics objected to honoring a poet whose time seemed to have passed - at least politically speaking - and who wasn't keeping up with events in his home country, Syria. 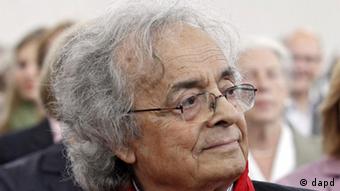 Adonis said in an interview that Assad was capable of reforming Syria - even though he had already had thousands of people killed. The least Assad could do was to resign, added the poet.

His statements led to confusion. Had Adonis lost touch?

In the following years, the poet wasn't able to counteract these suspicions. On the contrary: He made public statements that irrevocably discredited him for his fellow Syrians. He couldn't support a revolution that began in the mosques, he said shortly after the beginning of the Syrian revolution, referring to the fact that Syrian dissidents were meeting in places of worships due to a lack of other suitable locations.

Adonis once told the Lebanese daily "Al Safir" that he didn't understand why Syrians were still labeled a "people of revolution" since a third of the population had already left the country.

Adonis has been chosen to receive the Erich Maria Remarque Prize from the German city of Osnabrück - the hometown of pacifist writer for which the award is named. It's no big surprise that the decision has stirred up controversy not only among Arab intellectuals.

When Adonis was announced to be the recipient of the award back in September 2015, DW editor Ahmad Hissou, a native of Syria, called the decision a "black day." After nearly five years of war, Adonis still has not shown solidarity with his compatriots, commented Hissou.

The DW editor added that he was astonished that the poet, who has lived in Paris for many years, derided the Syrians who are fleeing from Assad's bombs and the weapons of the "Islamic State" in his interview with "Al Safir." "At a time when Germany is taking in hundreds of thousands of Syrian refugees, Osnabrück is distinguishing a poet who has hardly ever criticized Assad," summed up Hissou.

Why Adonis was chosen for the peace prize

This year's winner of the Peace Prize of the German Book Trade, Navid Kermani, expressed his objection with deeds as well as words: He has refused the invitation to hold a laudation speech in Adonis' honor in Osnabrück. 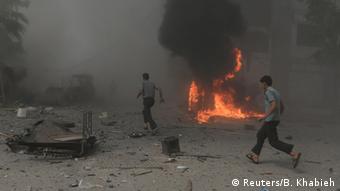 Kermani told the German daily "Kölner Stadtanzeiger" that he respects Adonis' work, but criticizes that the poet has not distanced himself from the brutal methods the regime in Damascus has taken against its own people.

The city of Osnabrück has said that the jury was well aware that the prize would stir up controversy. "The award for Adonis is intended to spark a discussion about the problems in Syria and about possible solutions, as well as about the responsibility other states bear and the influence they can have," said the city in a statement.

Jury member and Osnabrück's mayor, Wolfgang Griesert, pointed out that Adonis' stance on other social issues - in particular, his "advocacy for a separation of religion and state and for equal rights for women in the Arab world" - were pivotal to the jury's decision.

The poet addresses fundamental questions beyond the current conflict, said Griesert, explaining that his work fulfills the ideals of the Remarque peace prize.

More than 11 million Syrians, according to the UNHCR, are currently displaced. more than 250,000 people are estimated to have fallen victim to the war, according to United Nations figures.

Most of the victims have been killed, not by the "IS," but by Assad's regime. "Adonis should have commented on that," said DW editor Ahmad Hissou. "That would have been worthy of a peace prize."