Backed by Russian jets, Syrian government troops have edged forward in the northern province of Aleppo. Russian PM Dmitry Medvedev has said Moscow's airstrikes in Syria were an attempt to protect its national interests. Since Moscow started its air campaign in Syria on September 30, the Syrian army and its allies have launched four ground offensives against rebel forces in northern and central Syria.

According to the Syrian Observatory for Human Rights, regime troops recaptured at least five villages south of Aleppo that had been under rebel control.

Activist Omar al-Halabi, who is based in northern Aleppo, told DPA news agency that Russian jets backed Syrian government troops by carrying out more than 15 raids on several villages.

Furthermore, three senior commanders of the Islamist al-Nusra Front were killed in the western part of Aleppo. The activists did not say whether the three had been killed by Russian or US-allied warplanes.

Syrian forces are also trying to lift a siege imposed by the militant group Islamic State (IS) on the Kweires airbase in the northeastern sector of Aleppo.

The government's goal in capturing the airbase is to allow Russian warplanes to use it for future airstrikes, according to activists from the Britain-based Syrian Observatory for Human Rights. 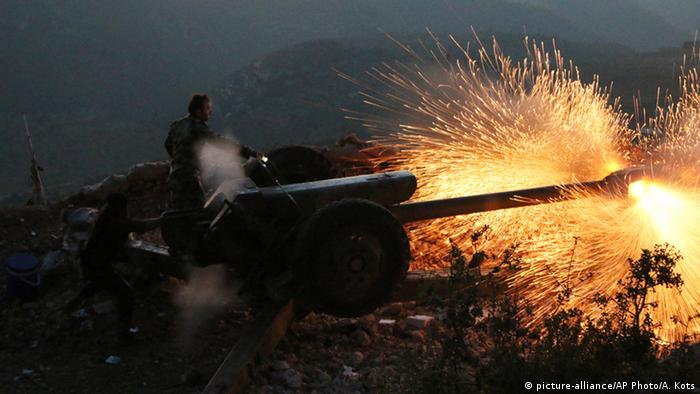 Russian Prime Minister Dmitry Medvedev said Moscow's air war was an attempt to protect its own national interests and security.

"Of course we are not fighting for specific leaders; we are defending our national interests, on the one hand," he stated.

"And secondly, we have a request from the lawful authorities (of Syria). That is the basis we are working on. The president (Vladimir Putin) said this: it's obvious that if we don't destroy these terrorists there, they will come to Russia."

More than 250,000 people have been killed since the Syrian conflict started with peaceful pro-democracy protests in 2011.