Russia's Defense Ministry dismissed activist reports that it had carried out the strikes in a rebel-held area of Idlib province. The United Nations considers the area one of the most dangerous regions in the world. 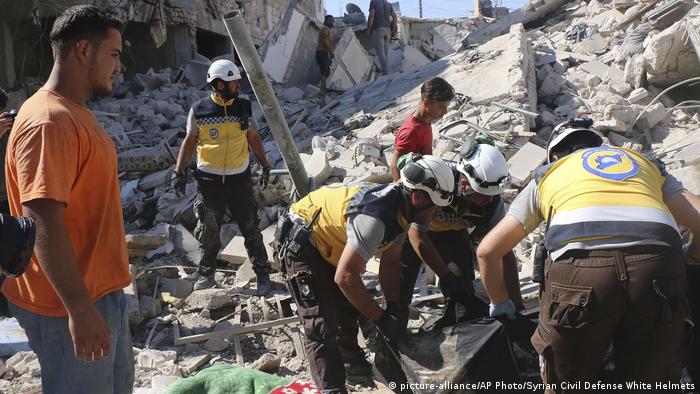 Russia on Monday denied claims that it carried out air strikes on a public market in northwestern Syria that killed at least 37 people.

"This the largest massacre to take place since the offensive started in April," Observatory head Rami Abdel Rahman told the DPA news agency.

The war monitor added that 105 people had been injured in the bombing in the city of Maaret al-Numann, and that more were feared still under the rubble.

"The Russian air force was not carrying out any missions in this part of Syria," it said in a statement.

Russian warplanes have been supporting forces loyal to Syrian President Bashar Assad in their fight to retake rebel-held areas of Idlib and Hama. The provinces are the last rebel strongholds left in the war-torn country.

Idlib region is home to 3 million people and is meant to be protected by an international truce deal. However, it has come under increased aerial attack by the Syrian regime and Russia in recent months.

Idlib "has fast become one of most dangerous places in the world for civilians and aid workers today; a crisis within a crisis," said David Swanson of the United Nations Office for the Coordination of Humanitarian Affairs.

"This violence must stop and it must stop now," he added.

The recent uptick in violence has resulted in the deaths of more than 650 civilians as well as destroying or knocking out of service in excess of 20 health facilities.

More than 330,000 people have fled the area over the past three months, according to UN statistics.