Millions of people have been displaced in the civil war and one-third of the country remains out of government hands. But the Syrian regime is holding local elections across the country to show strength and normalcy. 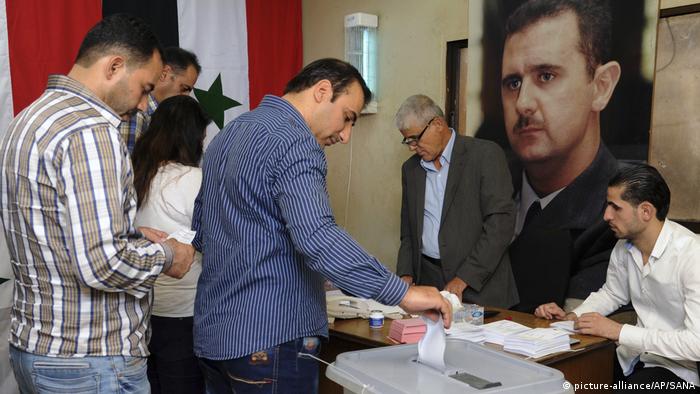 Syria held local elections for the first time since 2011 on Sunday, in a bid to show strength and present a veneer of normalcy as President Bashar al-Assad's government re-extends control over large swaths of the country.

State news agency SANA said there was "good turnout" at the 6,551 electoral stations, without specifying. Images from state media showed voters putting ballots into plastic boxes with ubiquitous pictures of Syrian President Bashar Assad on the wall looking on.

According to observers, the results are almost sure to be rigged in favor of the ruling Baath Party, which has dominated politics and security in the authoritarian state since the 1960s. Most of the candidates were either from the Baath Party or tied to it.

Backed by Iran and Russia, the Assad regime has turned the tide in the seven-year civil war and now controls almost two-thirds of the country.

Pro-government forces have most recently retaken control of the Damascus suburb of Eastern Ghouta and the southwest corner bordering Jordan and Israel.

After casting his vote in Damascus, Prime Minister Imad Khamis said the elections sent a message to the world that Syria had defeated terrorism and the country has returned to normalcy, state media SANA reported.

Nearly 12 million people out of a pre-war population of 22 million who have been either internally displaced or made refugees outside the country were unable to vote.

No vote was held in rebel-held Idlib province, where more than 3 million civilians are at-risk ahead of a widely anticipated government offensive that for now appears to have been put on hold pending efforts by rebel-backer Turkey to cut a deal with Russia.

The local elections were also not held in northern Syria, where US-backed Kurdish forces have set up a self-administered region alongside Arab and minority allies.

Autonomy on the table

The Kurds, who have had a tacit understanding with the Assad regime, seek a federal Syria that recognizes minority rights and local administration.

High-level talks between representatives of the self-administered region and Damascus are yet to reach a breakthrough.

Syria held parliamentary elections in 2016 and a presidential vote in 2014 that again cemented Assad and Baath Party rule over the country.

Opinion: Battle for Idlib also a fight against terror

Of course, the main concern in Syria's last opposition-held province is the trapped civilians. But the area is also a stronghold of radical jihadis, writes Rainer Hermann of the newspaper Frankfurter Allgemeine Zeitung. (15.09.2018)