The toddler suffered from severe malnutrition due to being fed a conservative vegan diet. A judge said the nutrition was "completely inadequate" for a baby. 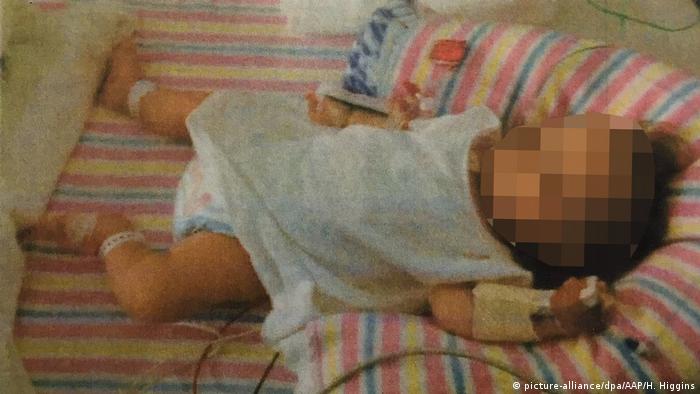 The photograph of the then-19-months-old, malnourished baby was presented as evidence in court

An Australian couple who neglected their baby by feeding her a strict vegan diet will not go to jail, local media reported on Thursday.

Sydney District Court Judge Sarah Huggett said during the sentencing that the vegan diet was "completely inadequate" for the toddler's development.

"This child was severely malnourished, underweight and undersized, and delayed as far as age-appropriate milestones were concerned," Huggett said, according to Australian broadcaster ABC. The child was also not given the recommended vaccinations.

The 35-year-old man and 33-year-old woman were given an 18-month intensive corrections order and 300 hours of community service.

The couple was charged last year when their 19-month daughter had a seizure and was admitted to a local hospital.

Read more: Visiting vegan: Could you give up animal products for a week?

Hospital tests showed the toddler had severe malnourishment, no teeth and thin bones. She weighed only 4.89 kilograms (11 pounds) and resembled a three-month-old baby.

For the first 19-months of her life the baby was given a "conservative vegan diet" consisting of oats with olive oil, rice milk, vegetables, rice, potatoes and tofu as well as fruit, the court heard.

The couple pled guilty in December to failing to provide for a child, causing danger and serious injury.

The maximum sentence for the offense was five years in prison.

Now three years old, the daughter lives with relatives but continues to suffer from height and weight deficiencies. The parents have visiting rights, but access to the child is supervised.

Vegans march in Germany to 'give animals a voice'

Vegans are aiming to better organize and advance their message through animal rights activism. Tens of thousands are joining the Animal Rights March worldwide, including in the German cities of Cologne and Berlin. (17.08.2019)

A second person this week has been given a suspended prison term for condoning terrorism in France. With the country still mourning the victims of an attack last week, the vegan's Facebook post triggered indignation. (30.03.2018)