Vegans march in Germany to 'give animals a voice'

Vegans are aiming to better organize and advance their message through animal rights activism. Tens of thousands are joining the Animal Rights March worldwide, including in the German cities of Cologne and Berlin.

Around a thousand vegans marched through the streets of the western city of Cologne on Saturday to highlight the plight of the hundreds of millions of animals slaughtered and abused each year.

Chanting "It's not food, it's violence" and "Animal liberation in one generation," sign-carrying animal rights supporters snaked through the streets of the city to highlight health, environmental and humanistic aspects of a growing global movement.

The action, part of the Animal Rights March founded by the UK-based organization Surge three years ago, intends "to unite the vegan community globally and to inspire vegans to speak up for animals in their everyday lives and get active in their local communities."

This year, protests are planned in 42 cities around the world, including the German capital, Berlin, and are expected to draw tens of thousands of people. The Berlin march is scheduled for next Sunday, August 25.

There are 1.3 million vegans — people who don't consume any animal products – and 8 million vegetarians among Germany's population of 82 million, according to surveys. It's a number that increases every year.

Yet vegans have only recently started to organize around the cause of animal rights, said Katharina Pozo, the main organizer of the Cologne protests. She described the vast majority of those who avoid consuming animal products as "silent vegans."

The goal of the march was to foster activism and "use this day to find your voice every day" in order to inform society,  while at the same time letting each individual make their own decision, she said.

The activists wanted "to give animals a voice," she said.

Read more: Germany: 'Meat tax' on the table to protect the climate 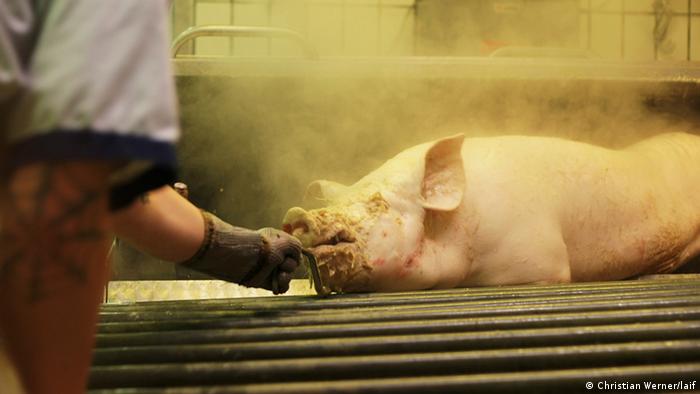 Lia, a young woman from the group Anonymous for the Voiceless, made her decision to become a vegan after watching "Earthlings," a documentary about humans' brutal use of animal products for profit.

Anonymous for the Voiceless is a grassroots animal rights organization that takes its message to the streets with black-clad activist in masks showing videos from inside slaughterhouses and engaging passersby who are interested in veganism.

Some vegan activists are relatively passive, while others are more active. The organization Direct Action Everywhere engages in animal rescues and disruptions at places where there is violence against animals.

On Saturday, following the main protests, a group of about 50 people flooded a McDonald's in central Cologne, shouting slogans and holding signs as a performer doused herself with fake blood.

"We want people to care,” said Natascha Blumenkind, a DxE organizer. "Actually everyone already does, but the system and society trains us to look away. If we can make visible what is right under the surface, nobody will look away anymore."