Nazi opposition to "degenerate" jazz and swing may be well known, but few know Goebbels used the propaganda value of the music to target Allied listeners via the airwaves with his band Charlie and his Orchestra. 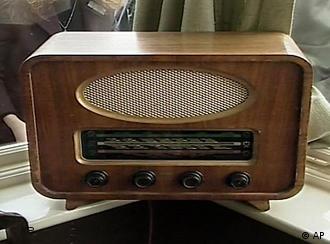 "Mr Churchill, you never can win this war."

During the Nazi era, an ominous knock on the door often meant the end of the party for Germany's teenagers who belonged to the so-called "swing generation" -- those who grew their hair long, listened to American swing and big band jazz and rebelled against the martial drills of Hitler's youth league.

The Nazis, who frowned upon jazz as "impure" and "degenerate" on account of its African-American roots promptly banned the music when Hitler came to power in 1933. The Führer's lieutenants routinely busted parties and hauled away defiant teenagers and musicians to concentration camps for listening to the "decadent" records. 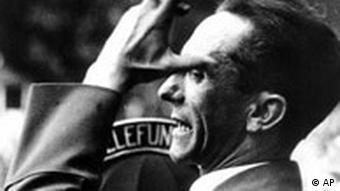 But not everyone who dared to listen to Benny Goodman and swing bands had to fear such a dreadful fate. Some like saxophonist Lutz Templin actually received covert encouragement to listen to the latest hits by American swing orchestras and take copious notes. The orders came from none other than Joseph Goebbels (photo), Hitler's much-feared propaganda minister.

Shortly after Hitler's ascension to power, Goebbels took over the German airwaves and broadcast Nazi propaganda texts throughout the world via short-wave. Recognizing the enormous influence of radio and music, the crafty minister called for the creation of his own swing band in 1940.

He figured that while music at the home front had to conform to the traditionalist tastes of Hitler and the Nazi elite, a bit of oomph was needed for propaganda aimed at foreign countries.

Founded by Templin and fronted by crooner Karl ("Charlie") Schwedler, the orchestra formed a crucial spoke in the wheel of the massive Nazi propaganda machine. Called "Charlie and His Orchestra," the band combined hit-parade savvy with pro-Nazi, anti-Semitic lyrics in English, which were broadcast into the living rooms of America, England and other "enemy" countries.

Bringing some pizzazz in German broadcasting

"Charlie," who spoke perfect English, carefully listened to the latest American hits from Broadway productions, jazz classics and Hollywood films, rewrote the lyrics and repacked them with subversive pro-Nazi propaganda.

The band served up cover versions of the latest swing sensations and boosted German foreign broadcasting with much musical sizzle and hipster allure.

Many of the band's hits like You're driving me crazy and Slumming on Park Avenue (Let's Go Bombing…) lampooned British Premier Winston Churchill and painted him as a visionless old man, who hid in the cellar in the night to protect himself from mean German bombers.

Poor Mr. Churchill, how do you do?
Hello, Hello,
Your famous convoy are not coming through
Hello
German U boats are making you sore….
You're always licked, not a victory came through,
Hello …
You're nice little fellow, but by now you should now
That you never can win this war.

Because many of Germany's greatest jazz musicians were Jews and were deported to concentration camps, Templin had to recruit several musicians from countries occupied by Germany. The result was an orchestra that included some of Europe's finest jazz musicians like drummer Freddie Brocksieper and a host of temporary musicians from Belgium and Holland.

The band members enjoyed special privileges -- they were exempted form military service and were paid 16 deutschmarks every morning. In time, "Charlie and His Orchestra" gained a strong following abroad and, more clandestinely, within Germany itself.

Near the end of World War II the orchestra moved to Stuttgart from Berlin due to the heavy bombings. Broadcasting continued until April 1945. When the Americans marched into Stuttgart, they were so impressed by Charlie and his Orchestra that they promptly commissioned some of the members to regularly play for them.

But the end of the Third Reich also spelled the death knell for the band -- the musicians never played under the name Charlie and his Orchestra again.

"The British are more into this stuff"

Though the story of the historic Nazi propaganda jazz group has been the subject of books, films and documentaries, it's their music in the form of records and CDs that remains much sought-after. The recent appearance in Germany of 20 rare tracks by Charlie and his Orchestra, recorded between 1940 and 1948, has rekindled attention in the little-known chapter of the Nazi era -- at least in terms of the press.

But Bob Hertwig, who runs a one-man mail order music store in Hamburg, said the CDs had attracted "microscopic attention" among the buying public so far. "Hardly anyone is interested in old music anymore. It's a shame because it's well-made music. It's just a couple of old fogies who come by to hear it," Hertwig told DW-WORLD.

"I think the British are more into it, you know with the fascination with the whole World War stuff -- an English music store in Surrey stocked records of Charlie and his Orchestra in the 1980s and German label BMG promptly imported it," he said.

Charlie and His Orchestra Propaganda Swing