The daring heist of royal regalia involved thieves escaping on bicycles to a motorboat waiting on Lake Malaren. One man has now been sentenced to jail and two others are under investigation. 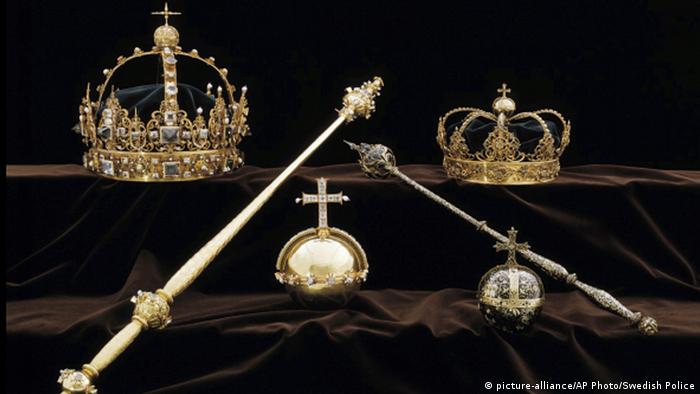 A Swedish court on Friday sentenced a 22-year old man to four and a half years in prison for stealing 17th-century royal treasures from a cathedral in broad daylight last year.

The Eskiltuna District Court found Nicklas Backstrom stole two crowns and an orb from the funerals of King Karl IX and Queen Christina on display in Strangnas Cathedral, west of Stockholm. The items dating from 1611 had been buried with the royal couple but were later exhumed and put on display.

Backstrom admitted during the trial that he had stolen the crown jewels, valued at 65 million kronor ($7 million, €6.1 million). The trial started in January and took an unexpected twist when the jewels were found on February 5 in a garbage bin outside Stockholm.

Backstrom's DNA was found on the objects, and he issued a confession.

The king's crown was found damaged and some stones had fallen off.

"The regalia need to be repaired as much as possible so a lot of work remains," the cathedral's dean Christofer Lundgren said, according to Swedish broadcaster SVT.

The July 31, 2018 heist involved two thieves breaking through security glass and running off with crown jewels on stolen bicycles toward a motorboat waiting on Lake Malaren.

Two other people, aged 24 and 26, have been arrested in the case. One is suspected of dumping the jewels in the garbage bin.

During the trial, Backstrom did not say whether he had accomplices.

It is not the first time Swedish royal jewels have been stolen. In 2013, the 16th century burial regalia of King Johan III was robbed from Vasteras Cathedral.

Several days later an anonymous tip led to the treasure being found in a garbage bag left on a countryside road.

Some funeral regalia are kept in the cathedrals of Strangnas, Uppsala and Vasteras, but Sweden's crown jewels are in secure vaults under the Royal Castle in Stockholm.

Europe to the maxx: A night in an ice hotel

Maggot cheese and mouse wine are just some of the 80 foods on display. While many come for a shock, the museum's director tells DW he hopes visitors will realize that disgust is in the eye — or stomach — of the beholder. (04.11.2018)

A treasure trove of jewelry from the Bourbon-Parma royal family — including pieces once owned Marie Antoinette — blew past pre-auction estimates. The French queen's pearl and diamond pendant sold for $36 million alone. (15.11.2018)

In late July, two men stole some of Sweden's royal jewels from a cathedral before getting away in a speedboat. Although one person has now been arrested, the hunt is still on to recover Sweden's priceless treasures. (13.09.2018)