Two members of the Russian protest group have won an appeal on their asylum claim in Sweden. The couple said they had received death threats and feared arrest if forced to return to Moscow. 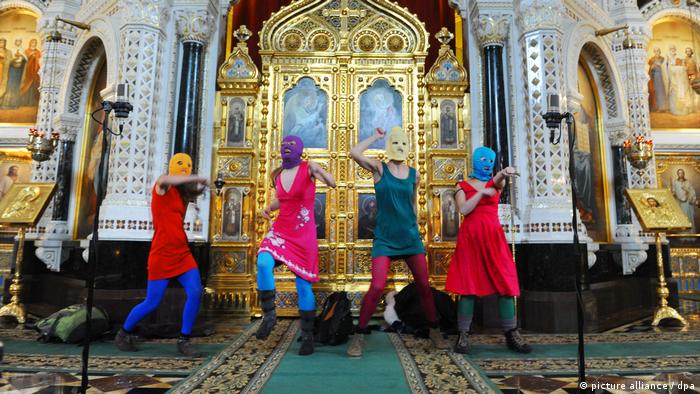 The two activists, parents of two children, initially filed an asylum claim in 2017 citing harassment death threats and fearing arrest if they were forced to return to Moscow. Their claim was denied by Sweden's immigration office, but they appealed the ruling.

"I am very happy that my children will be able to grow up in security, in particular in view of what has been going on [in Russia]," Djanyan told SVT after their asylum appeal was approved.

The Pussy Riot collective was formed in August 2011 and consists of a dozen performers and several other members who handle technical work, such as recording and posting videos.

Often decked out in neon balaclavas and tights, the group has made its name with politically charged performances, protesting against everything from the Russian church to the persecution of gays in the country.

Knedlyakovsky was jailed for 15 days in 2016 for hanging a cross on a statue depicting the head of the FSB, Russia's security service.

Last year, the European Court of Human Rights condemned Russia for sentencing three Pussy Riot members to two years in a prison colony after they performed a protest song against Russian President Vladimir Putin in 2012.

Rubbing elbows with Pussy Riot and the 'hip' Putin elite

Award-winning journalist Michael Idov chronicles his odd daily life as the chief editor of GQ Russia in "Dressed Up for a Riot: Misadventures in Putin's Moscow." He told DW how the opposition evolved since the 2010s. (28.02.2018)

Russian activist Pyotr Verzilov is under police protection in Berlin after suffering an apparent poisoning attack in Moscow. Speaking to DW, Verzilov says he had been targeted over his investigative work. (28.09.2018)

Currently touring New Zealand, the Russian feminist punk group had a performance planned in Christchurch on Friday. The band is also banned from entering Brazil, which was the next stop on their international tour. (15.03.2019)

A member of Russian protest group Pussy Riot has been released from a German hospital after recovering from a suspected poisoning. The activist says he's "convinced" he was targeted by Russia's secret service. (26.09.2018)