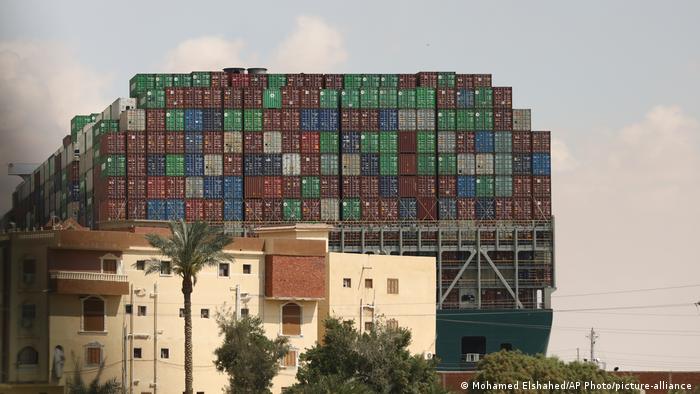 The huge container ship has been stuck in the canal since Tuesday, blocking all other maritime traffic

The head of Egypt's Suez Canal Authority, Osama Rabie, said Saturday that "technical or human errors" may be to blame for the grounding of a giant container ship in the crucial waterway.

Authorities are working to free the vessel, named the Ever Given, which has been wedged diagonally across the span of the canal since Tuesday, blocking the shipping route in both directions.

Rabie told reporters that the ship could possibly be refloated by Sunday evening.

"We could finish today or tomorrow (Saturday or Sunday) depending on the ship's responsiveness" to tides, Rabie said. "We expect that at any time the ship could slide and move from the spot it is in."

Officials previously said strong gusts and a sandstorm had caused the ship to run aground. But Rabie said "weather factors were not the main reasons for the ship's grounding."

"There may have been technical or human errors."

The blockage has caused a huge traffic jam of more than 300 ships along the 193-kilometer (120-mile) canal, and caused major delays in the delivery of oil and other products. Some companies have even been forced to consider re-routing vessels around the southern tip of Africa.

The vessel's Japanese owner had voiced hope on Friday that the ship could be dislodged by late Saturday.

"The ship is not taking water. There is no problem with its rudders and propellers. Once it refloats, it should be able to operate. We are continuing work to remove sediment as of now, with additional dredging tools," said Yukito Higaki, president of Shoei Kisen KK, which owns the ship.

The parent company of Dutch firm Smit Salvage, which is in charge of the salvage operation, said the ship would only likely be afloat again "at the start of next week."

Crews have been working overnight with large dredging machines under floodlights in an attempt to free the ship, which is about the size of the Empire State Building in New York.

Dredgers have so far removed more than 20,000 tons of sand from around the ship's bow, while 14 heavy tugs have been brought in to assist.