Protesters have called for justice for those killed in a brutal raid on a Khartoum camp. The military and civilian opposition still can't finalize power-sharing months after the overthrow of President Omar al-Bashir. 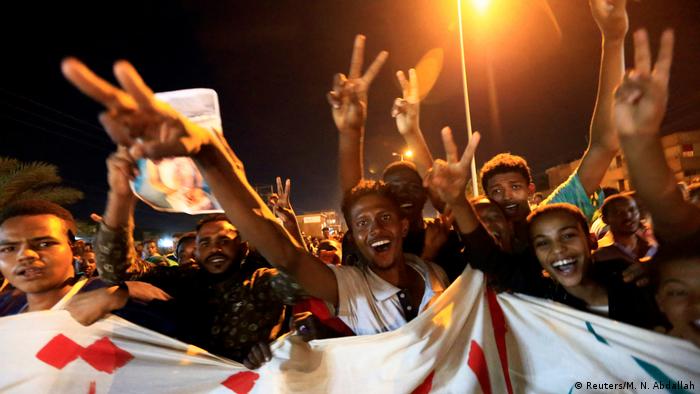 Thousands of Sudanese demonstrators took to the streets on Saturday, still angry at the storming of a protest sit-in in the capital Khartoum last month which left dozens dead.

The rallies — dubbed Justice First — followed a call by the protest movement, the Alliance for Freedom and Change, for a "transparent and fair" investigation into the massacre.

Chanting "Blood for blood, we won't accept compensations," crowds of protesters marched in Khartoum's northern district of Bahari. Similar rallies were held in several other cities.

Protests first erupted in December against the autocrat Bashir's government, prompting Sudan's military to step in on April 11, only to face further protests demanding a return to civilian rule. The troubles came to a head on June 3 when crowds of protesters were violently dispersed by men in military fatigues in a pre-dawn raid on a protest site outside the army headquarters in Khartoum.

Sudan's military council insists it did not order the raid, which according to the protest movement killed more than 100 people and wounded hundreds more. Authorities have put the death toll at 61.

Deal due any day

Saturday's rallies were the first since the ruling military council and civilian opposition agreed in principle to a power-sharing arrangement ahead of elections. The deal has yet to be finalized and signed.

A meeting between the two sides planned for Saturday was postponed to Sunday.

The new governing body aims to install a transitional civilian administration for a period of just over three years, presided over by a military nominee for the first 21 months, and by a civilian for the last 18 months.

In another twist to the crisis, the military said on Thursday it had foiled an attempt by 12 soldiers to seize power.

Sudan: Deportations to an embattled country

After the military council used brutal force against civilian protesters, the situation in Sudan has continued to escalate. Now German politicians are debating if rejected asylum seekers can still be deported there. (17.06.2019)

The Sudanese military and civilian opposition have agreed on democratic elections in three years' time. Meanwhile, they're supposed to share power in a council. But will they? And can they without more violence? (06.07.2019)