Stockholm attacker Rakhmat Akilov has pleaded guilty to carrying out last April's truck attack. Akilov said he wanted to pressure Sweden into ending its support for the fight against "Islamic State." 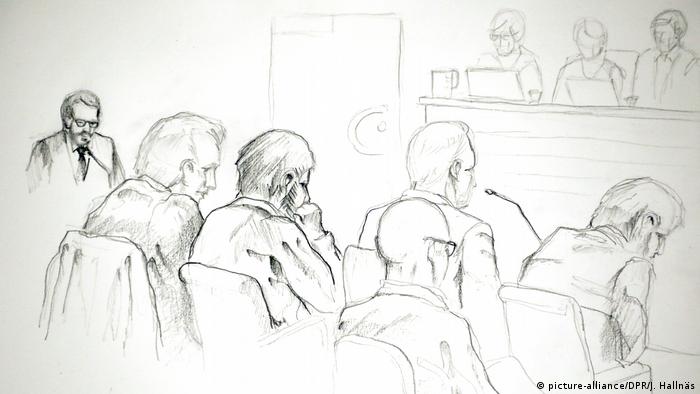 A rejected Uzbek asylum seeker who killed five people in a Stockholm truck attack on Tuesday said he had hoped to pressure the Swedish government into ending "its participation in the fight against the caliphate, to stop sending its soldiers to war zones."

Testifying in court for the first time Tuesday, Rakhmat Akilov added: "I did this because my heart and my soul aches for those who have suffered from the bombings of the NATO coalition."

Akilov admitted during the first day of his trial last week to carrying out last April's deadly truck attack in Stockholm.

The 40-year-old suspect said he had stolen the beer truck used in the attack, and that he had swerved widely as he drove onto the crowded high street to mow down as many pedestrians as possible.

The suspect also told the court that the terror attacks in Spain and kidnapping of Japanese journalists had successfully forced the two countries to change their stance in the fight against IS.

Three Swedes were killed in the attack, including an 11-year-old girl, as well as a 41-year-old British man and a 31-year-old Belgian woman. Around 15 more people were injured.

While Sweden is not a NATO member, it does have some 70 troops deployed in the Middle East, mainly in northern Iraq, tasked with supporting the US-led coalition against the "Islamic State" (IS).

Swedish intelligence agency Sapo is still probing with whom Akilov had communicated in planning the attack.

Akilov claimed in court it was approved by IS members he had been in contact with on encrypted chat sites. He also maintained not to know the real identity of these people, only their online pseudonyms.

Akilov also said he had initially intended to attack NATO-member Denmark, although was ordered to strike Sweden instead by one of his contacts.

Ahead of the attack, Akilov said he recorded a video of himself pledging allegiance to the leader of IS.

Process an insight into radicalization

Prosecutor Hans Ihrman said he was seeking a life sentence against Akilov for charges of "terrorism and attempted terrorism," followed by his deportation. Life sentences in Sweden vary, but are on average around 16 years.

Ihrman told the court on Tuesday that he expected the trial to provide a better understanding into the "process of radicalization."

Akilov's case, Ihrman said, "fits into a broader framework" of jihadis who are "marginalized in a foreign country" and seek to strike "symbolic targets."

Gustaf Linderholm, a lawyer for 13 of the plaintiffs, said that from Akilov's testimony, "it's quite obvious that we are dealing with a person who is quite convinced of the splendor of his deed."

The trial is slated to run until May.