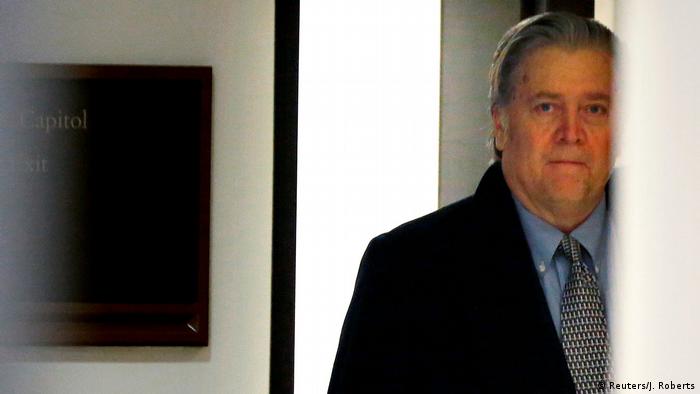 Steve Bannon, US President Donald Trump's former chief strategist and policy adviser, has reportedly struck a deal to be interviewed by Special Counsel Robert Mueller as part of the investigation into alleged ties between the 2016 Trump election campaign and Russia, rather than appearing before a grand jury. The New York Times originally reported on Bannon having been subpoenaed on Tuesday.

Bannon's was the first known subpoena to be issued by Mueller against a member of Trump's inner circle, according to the newspaper.

News of the Mueller camp's move to question Bannon came as the former White House strategist testified before the House of Representatives Intelligence Committee, which is running its own probe into allegations of collusion between the Trump camp and Moscow.

During his testimony, which occurred behind closed doors, Bannon refused to answer several of the committee's questions by citing "executive privilege" which allows the president to keep information from the public. His attorney Bill Burck maintained contact with the White House throughout the hearing, relaying questions in real time and waiting for answers as to whether his client could address the questions representatives put to him.

The committee later issued its own subpoena for Bannon for refusing to answer its questions which also focused on Trump's thinking when he fired former FBI Director James Comey.

The top Democrat on the committee, Representative Adam Schiff, said Bannon's continued refusal to answer the questions, even after the subpoena, was a directive from the White House.

When Bannon consulted the White House, he "got the same instruction back again. Basically, 'we don't care whether it's under compulsory process or a voluntary basis — we're instructing you, effectively putting in place a gag rule,'" said Schiff.

Rep. Adam Schiff : "This was effectively a gag order by the White House

The panel is scheduled to hear from former Trump campaign manager Corey Lewandowski later this week.

Once the champion of Trump's "America First" campaign, Bannon was fired from the White House in August and returned to run the right-wing website Breitbart News. Bannon still spoke highly of Trump and vowed to continue pushing the president's agenda.

However, the pair have since had a very public falling out over comments Bannon made in journalist Michael Wolff's book "Fire and Fury: Inside the Trump White House."

In the book, Bannon is quoted as saying that meetings held between Trump's eldest son, Donald Trump Jr, his son-in-law, Jared Kushner, and a Russia-linked lawyer amounted to treason.

When news of Bannon's comments broke, Trump accused his former aide — whom he now disparagingly refers to as "Sloppy Steve" — as having "lost his mind." Bannon has since said he regretted making those remarks about the president's son, insisting the treason accusation was directed instead at Manafort.

An increasingly isolated figure within conservative circles, Bannon subsequently stepped down from Breitbart after losing the support of wealthy conservative brokers the Mercer family.

US President Donald Trump's former adviser Steve Bannon has stepped down as executive chairman of the website Breitbart News. It comes days after Bannon and Trump openly feuded over reported remarks in a new book. (09.01.2018)

The Day with Brent Goff: Back to Bannon

Donald Trump's longtime adviser Roger Stone said he will not answer questions about the storming of the US Capitol. Stone appeared before a Congressional committee and asserted his right against self-incrimination.