Qatar has followed Abu Dhabi and Lebanon in German Foreign Minister Frank-Walter Steinmeier's Middle East trip. Qatar is his last stop - and the most complicated one. 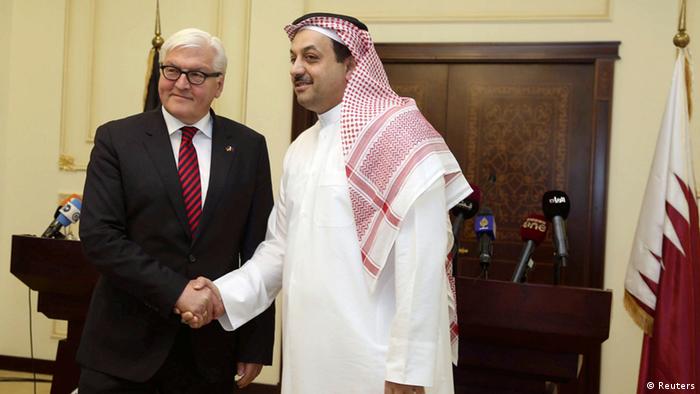 A hot wind blows through the many construction zones in Doha, Qatar's capital. German and European firms are involved in a number of the building projects. German builders Hochtief, for example, built a shopping center here that's more than eight kilometers (5 miles) long.

Every corner, it seems, bears testament to the country's rise and growth. However, foreign construction workers are paying at least part of the price for that growth. That fact helps explain why Qatar is the most complicated stop on German Foreign Minister Frank-Walter Steinmeier's five-day trip in the region.

Support for Islamists in Syria 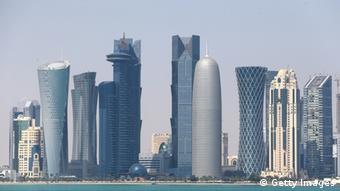 The skyline of Doha, which is set to host the World Cup in 2022

Doha is more or less openly supplying militant Islamist groups in Syria with money and weapons. In some regions, these groups - such as the Ahfad al-Rasul Brigade - are fighting directly against the Free Syrian Army, which is the opposition force supported by the Friends of Syria collective. The Friends of Syria group, which most recently met in London for talks, includes Germany as well as the United Arab Emirates - but also Qatar.

These inconsistencies aren't discussed directly. Of course, says Steinmeier, those in attendance had extensive discussions on Syria with the emir of Qatar, Sheikh Tamim Al-Thani, and Foreign Minister Khalid al-Attiyah.

"In London, we already spent half a day talking about support for the moderate opposition," Steinmeier said.

Appeal for a political solution

Steinmeier and al-Attiyah only seem to have reached true agreement on rejecting the election that Syrian President Bashar Assad is set to conduct this week. That move signifies a break, however.

"After this vote, we have to talk with each other again - we have to speak about a political solution," Steinmeier said, even though he doesn't sound hopeful when talking about the prospect of settling the Syrian crisis through political means.

As such, Steinmeier is urging smaller initial steps toward improving the lot of the Syrian population. In Abu Dhabi, the second stop on his current tour, he discussed negotiating regional ceasefires in Syria. If Qatar goes along with the idea, it could join the states seeking a political solution in Syria rather than supporting a military approach.

Of friends and colleagues 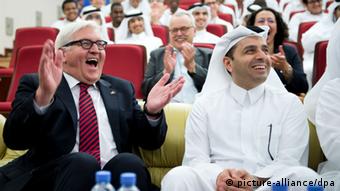 Generally, listening closely to the talks points to subtle differences in the climate of conversations conducted during this trip. Steinmeier and the foreign minister of the United Arab Emirates, Sheikh Abdullah, refer to each other as "friends" in their public statements. Qatar's foreign minister, on the other hand, is described as a "colleague."

However, when it comes to workers' situation in Doha - a central topic on Steinmeier's agenda - improvements can be expected. Germany's foreign minister says laws are to be changed that will result in better work contracts.

"That," Frank-Walter Steinmeier said, "is something my colleague promised me firmly."

The organizers of the World Cup in Qatar have denied any wrongdoing in the bid that won them the 2022 tournament. The latest allegations came in a report by a British Sunday paper. (01.06.2014)