On a visit to Lebanon, German Foreign Minister Steinmeier visited a refugee camp for a first-hand glimpse of how the Syrian crisis is affecting its neighbors. He raised the possibility of a donor conference in Germany. 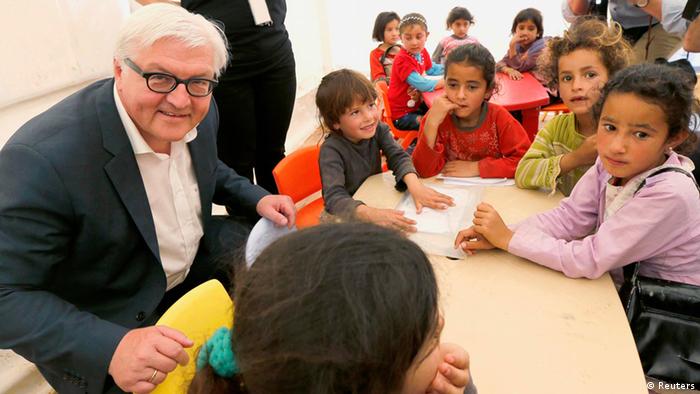 Rami is 15 years old and he only wants one thing: to go home. Instead he's in Zahlé, Lebanon, where he fled with his family from the Syrian city of Homs.

Zahlé is some 20 kilometers (12.4 miles) from the Syrian border. Thousands of Syrian refugees have come here to flee the civil war in their country. They stand in long lines to register - if they don't, they won't be able to get food, children will not be able to attend school, and they will not receive help from aid organizations.

Rami lives with his parents, grandmother and three brothers, including a two-month-old baby, in one tent.

"In Syria we lived in a real house," he said. "We had friends and family. I had my own room and a computer. I have nothing here. Life here is boring and rotten."

Rami is among the 140 Syrian refugee children who have appealed to the international community through the children's aid organization World Vision. The group presented a report to German Foreign Minister Frank-Walter Steinmeier when he visited Zahlé on Friday (30.05.2014). They hope that the world will help them leave the refugee camp.

Food is often scarce for Syrian refugees in Lebanon and, unlike in the larger refugee camps established by the United Nations in Jordan, the country lacks the infrastructure to cope with the massive number of people seeking shelter in Lebanon. 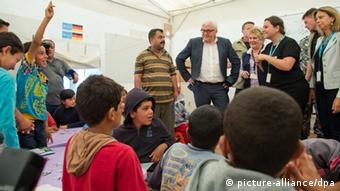 Three years ago the population of Lebanon was four million. Then the bloodshed began in neighboring Syria. Since then, one million Syrians have fled across the border. Lebanon has taken in more refugees than any other country in the world, and its economy and social systems are on the brink of collapse.

After his talks with Steinmeier, Lebanese Foreign Minister Gebran Bassil announced that the government planned to treat some 40 percent of Syrian refugees as economic refugees, as they did not live in regions close to the border and could have fled to other neighboring states. These Syrians would be returned home, Bassil said. He added that, if their homes had been destroyed, Beirut would create accommodations for them along the border.

Steinmeier, while making clear his respect for the large number of refugees Lebanon has taken in, replied that this would be a step in the wrong direction.

"We agree with the [UN High Commissioner for Refugees] that responsibility needs to be taken for refugees - people who have lost everything - and that they cannot be put up in no-man's-land, to say nothing of sending them back to Syria," he said.

Europe needs to do more

Most of the 100 million euros ($136 million) Germany has provided to Lebanon over the last three years has gone on supporting refugees, while the rest was spent on the water supply and other measures to improve the country's infrastructure. An additional 5 million euros, which Steinmeier promised on this trip, is unlikely to do much to alleviate the dire situation. 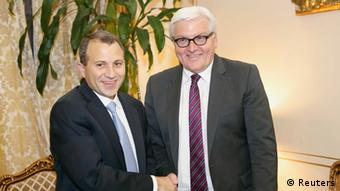 Germany has taken in 30,000 refugees, more than any other European country, but Steinmeier said more still needed to be done: "We have to convince our European partners to accept more refugees."

Steinmeier said he talked with Bassil about the possibility of an international conference to collect development funds for aid groups working Lebanon, adding that Germany would be an ideal location for such a conference.

Ultimately, though, the solution for the refugee crisis is to find a way of ending the conflict in Syria. Steinmeier will be addressing this issue in the next stations of his Middle East trip, Abu Dhabi and Qatar.

In the meantime, though, the story remains the same for 15-year-old Rami and other young Syrian refugees - as does their demand: "Work together to end the crisis in Syria. We want to go home."

Assad gets support from Syrians in Jordan

Expats voted in Syria's presidential election a week before people in their country go to the polls. Views of the election's legitimacy vary from a free and democratic vote to an utter farce in a country at war. (29.05.2014)