Germany’s foreign minister says talks must find a solution for Ukraine. Frank-Walter Steinmeier has also raised the issue of humanitarian aid for civilians in the separatist-held cities of Luhansk and Donetsk. 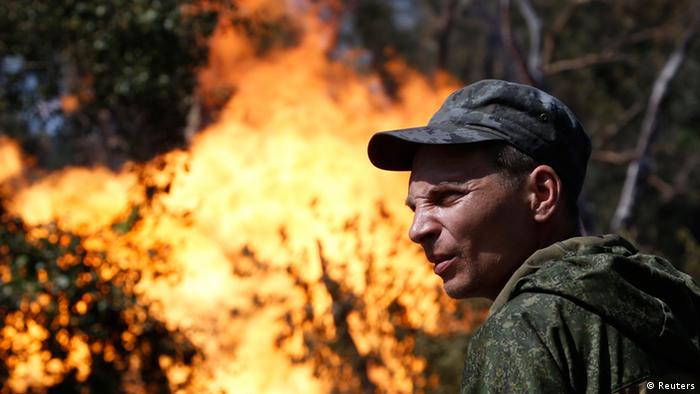 On Sunday, German Foreign Minister Frank-Walter Steinmeier said that the conflict should not turn into "a direct confrontation between Ukrainian and Russian armed forces."

Steinmeier's comments came before Sunday's Berlin meeting between the foreign ministers of Russia, Ukraine, Germany and France to find, in his words, "a roadmap toward a sustainable ceasefire."

Ukrainian Foreign Minister Pavlo Klimkin has said that Sunday's talks with his Russian counterpart, Sergei Lavrov, would "not be easy." He wrote on Twitter Sunday that "it is important to stop the flow of weapons and mercenaries from Russia."

The conflict between Ukraine's government and separatists has been running for four months now, killing more than 2,100 people and unleashing a humanitarian crisis. According to the United Nations, more than 285,000 people have fled the fighting.

The separatists shot down another Ukrainian warplane overnight. A military spokesman confirmed the downing of the Mig-29 fighter in the Luhansk region of eastern Ukraine, saying the pilot had ejected and been found after a search.

Separatists have brought down some 10 Ukrainian aircraft since June. They also stand accused of having shot down Malaysia Airlines Flight 17 on July 17, killing 298 people.

This latest downing comes after the separatists claimed on Saturday to have opened up a supply line between Donetsk and Luhansk, eastern cities that are besieged by government forces.

German Chancellor Merkel has said she wants Russia to comment on claims by Ukrainian separatists that they have received arms from Moscow. This comes as rebels shoot down another Ukrainian warplane. (17.08.2014)