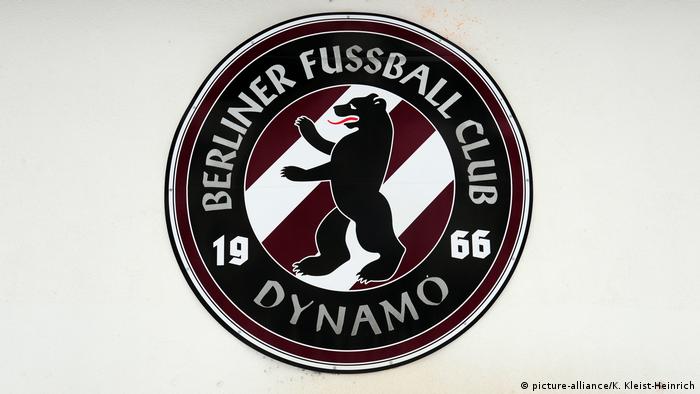 "Que sera, sera! Whatever will be, will be! The champions of Germany!" The football chant, based on an English classic, rings out from the main stand at the Friedrich-Ludwig-Jahn-Sportpark in the Berlin district of Prenzlauer Berg.

The song is being sung by supporters of Berliner FC Dynamo, cheering on their team against Lokomotive Leipzig in a 2019 fixture and setting which could have been taken straight out of East Berlin in the 1980s.

Except that, directly behind the opposite stand, a section of the Berlin Wall is now plastered with graffiti. In the area behind it, what was once a deadly stretch of no-man's land is now a popular park and flea market. And out on the pitch, it's not a top-tier East German Oberliga battle unfolding, but a goalless draw in the fourth-division Regionalliga. Attendance: 1,700.

It's a significant fall from grace for BFC Dynamo, ten-time Oberliga champions, three-time East German cup winners and pride of Erich Mielke, the head of the secret police, or Stasi. And yet, having lost their official state backing and survived multiple relegations and insolvencies, it's a miracle that the club still exists at all.

"We were on the brink of liquidation," says Rene Lau, a BFC member since 1979 and former club vice-president, recalling the existential crisis the club found itself in at the turn of the millennium. "Having the club struck from the register was a very real possibility." 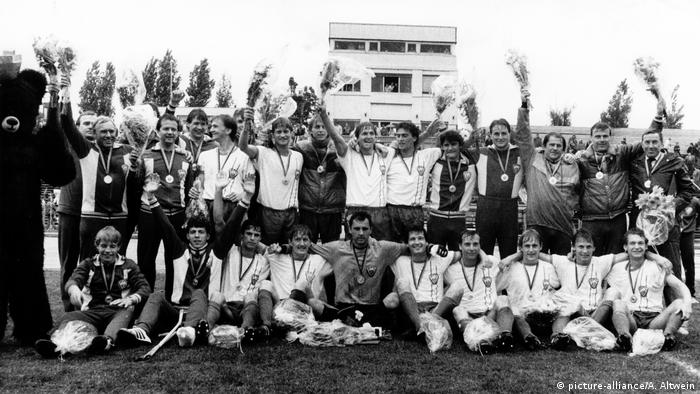 East Germany's top clubs all struggled to adapt to the free-market Bundesliga after reunification, but BFC Dynamo, having profited most from the state-controlled football of the GDR, suffered the most when that backing disappeared. When the wall fell, star players such as Andreas Thom and Thomas Doll upped sticks and headed westwards while new sponsors coming the other way avoided the detested "Stasi club."

"We were stuck in no-man's land," says Lau. "It was a catastrophe."

As the team plummeted down the leagues, the crowds disappeared. Soon, only a hardcore of a few hundred remained, many drawn from a right-leaning milieu, establishing a reputation which plagues the club to this day.

From 'Stasi club' to 'Nazi club'

"Even prior to reunification, the power within the BFC fan scene lay with right-wing extremists," says Robert Claus, an author and expert on right-wing extremism in German football. "The authorities didn’t really know how to deal with them because they couldn't comprehend how an extreme-right sub-culture could even exist in an anti-fascist socialist state like the GDR." 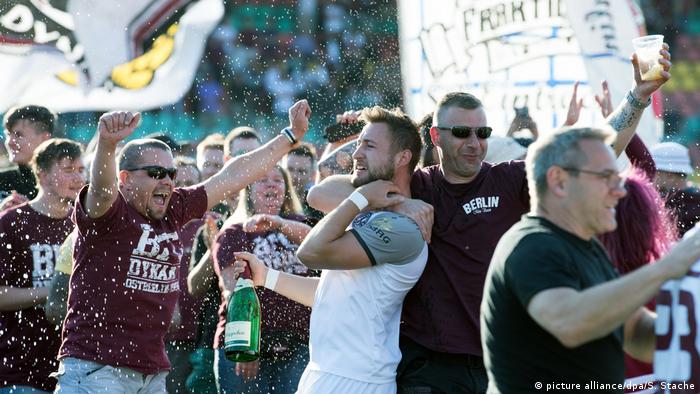 Nowadays, the club's remaining supporter base is small, committed, and controversial

However, what for some may have begun as provocation and rebellion against the communist dictatorship became much more serious when the wall fell, and the non-league BFC became a meeting place for Berlin’s right-wing, neo-Nazi, hooligan and criminal underground, safe in the murky lower reaches of the football pyramid.

BFC became associated with violence. In 1998, a BFC hooligan by the name of Christopher R. was among a group found guilty of beating a French gendarme into a coma in Lens at the 1998 World Cup. Earlier this year, the same man was back in court in Berlin accused of attempting to purchase 120 kilograms of cocaine worth €3 million with the intention of selling on for profit.

"There is a long history of right-wing, racist assaults and other incidents around BFC games," says Claus. "The club knows exactly who its fans are, and even within the club itself, you find people with connections to the hooligan scene. Of course, there are also people at BFC who aren't hooligans or Nazis but otherwise it's an incredibly homogeneous support."

It was to this fan base that the club turned when the financial situation turned critical in 2001. Collections were organized, donations were made, parties were thrown, and fans traveled as far as Austria and Switzerland to track down creditors and convince them to accept a smaller pay-off.

"To this day, the insolvency crisis remains the most important and defining moment for the older fans," says Lau. "We saved our club." 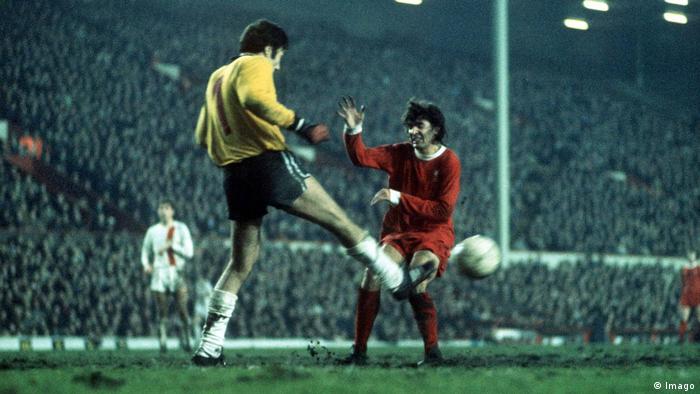 From 'Nazi club' to community club?

Since 2014, BFC have established themselves in the regional fourth tier. Against Lokomotive Leipzig, who would go on to win the league, they more than hold their own, even when reduced to 10 men.

In the stands, the atmosphere is familiar and relaxed in the late September sun. Families with children are among the fans, and there is no sign of violence. Nevertheless, the proportion of well-built, middle-aged men with shaved heads and masculine tattoos is higher than in other stadiums and, despite being in an alternative district of one of the most multicultural cities in Europe, ethnic minorities are conspicuous by their absence.

"BFC is very much a club which belongs to its milieu and lives from what it has," explains Claus. "In contrast to other clubs, BFC have never really managed to open themselves up to new generations or different types of fans."

Nevertheless, former vice-president Lau, now a lawyer whose clients include football supporters from all over Germany, is adamant that things have changed at BFC.

"If you had asked me 25 years ago [if BFC had a problem with Nazis], I would have said yes," he admits. "But is today's BFC Dynamo a Nazi club? I would vehemently dispute that."

In many aspects, the modern BFC Dynamo are a semi-professional community club like any other. The club fields youth teams in all age groups from Under-19 to Under-8 and have operated an award-winning day care center for over 200 local children aged 3-6 since 2003. The youngsters have German, Russian, Chinese, middle-eastern and Turkish backgrounds, reflecting the Berlin suburbs from which they hail.

"BFC is part of our community," says Lau. "There are always going to people with right-wing attitudes but unfortunately that's part of society and therefore part of football, part of BFC. But it's not the defining characteristic of our club."

However, if the internal view of BFC Dynamo is encouraging, the external perception hasn't changed. Of the 226 Berlin football fans categorized by local police as the violent "Category C," 101 are BFC fans - almost twice as many as Union Berlin (65) and Hertha BSC (60). There are also well-established connections between younger BFC hooligans and the Hertha hooligan/ultra group Kaliber 030, which is suspected of firing flares and rockets during the recent Berlin derby.

Older BFC hooligans, on the other hand, maintain relations with like-minded fans of 1. FC Magdeburg, and recently laid a wreath emblazoned with both club crests at a funeral march for the deceased Thomas Haller, a well-known neo-Nazi who was publicly mourned at a Chemnitzer FC home game back in March.

"In memory of our friend Tommy Haller," read the message on the wreath. "The group united. Fists clenched. We have sworn solidarity." It was signed: "MD/BFC hooligans."

Magdeburg were quick to condemn the incident and distance themselves from "all forms of extreme-right ideology." But there was a familiar silence from BFC.

Back to the future: specters of past and present

Later this season, while the Friedrich-Ludwig-Jahn-Sportpark is redeveloped into a fully-accessible Paralympic-level sports stadium, BFC will temporarily move back to the Sportforum in Hohenschönhausen, the former home of the Sportvereinigung Dynamo, the Dynamo Sports Association which was linked to the secret police. It's the spiritual home of BFC Dynamo where the club’s offices and youth teams are still based. 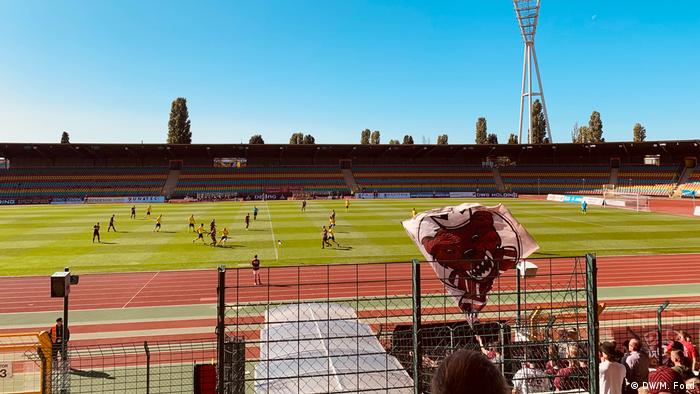 BFC Dynamo held Lokomotive Leipzig to a goalless draw at the Friedrich-Ludwig-Jahn-Sportpark, which is soon to be redeveloped

And despite the inherent links to the Stasi, BFC also want their old logo back, having lost the rights to the famous crest with the stylized "D" for Dynamo — as also used by Dynamo Dresden. The feeling of "Ostalgie" — a play on the words "Nostalgie" (nostalgia) and "Ost" (east) — is hard to escape, and GDR flags can still be seen at games.

"We can't change our history. It is how it is, it belongs to the club, and we have to live with it," says Rene Lau. "Yes, we were the Stasi club, but what can I do about that? It didn’t bother me then and it certainly doesn't bother me now."