Her career as a referee has been a single, meteoric rise without limits. Frenchwoman Stéphanie Frappart will become the first woman to officiate a Champions League game — it's just her latest milestone. 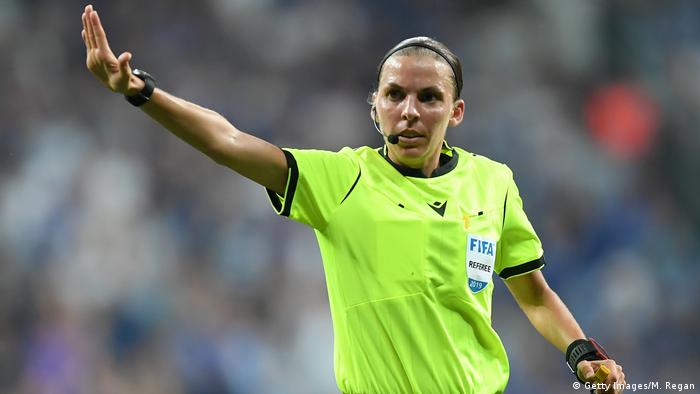 Top level European football has already had a taste of it. Liverpool, winner of the 2019 Champions League, and Chelsea, Europa League winners, met in the 2019 European Supercup. There were 22 men and one woman on the pitch: Stéphanie Frappart from France was the first woman ever to take charge of a men's final at European level. This novelty alone has ensured her an entry in the history books. "Stéphanie Frappart, forever a pioneer" was the title of the French newspaper "Le Parisien" before the game. But she is far more than just a historical figure.

On that August evening in Istanbul, Frappart not only whistled the game between the "Reds" and the "Blues", but did so with complete authority. Frappart delivered the perfect performance, and everyone was in agreement: "That was brilliant. She had everything under control at all times," was the verdict of former world-class referee Mark Clattenburg from England, for example. Now the Frenchwoman is the first woman ever to face a refereeing assignment in the men's Champions League. A look at her fabulous career makes the management of the match between Juventus and Dynamo Kiev seem a logical consequence. Kateryna Monzul from the Ukraine will also be the first female referee in the Europa League one day later but it's Frappart who has emerged as the most important female referee ever in soccer. 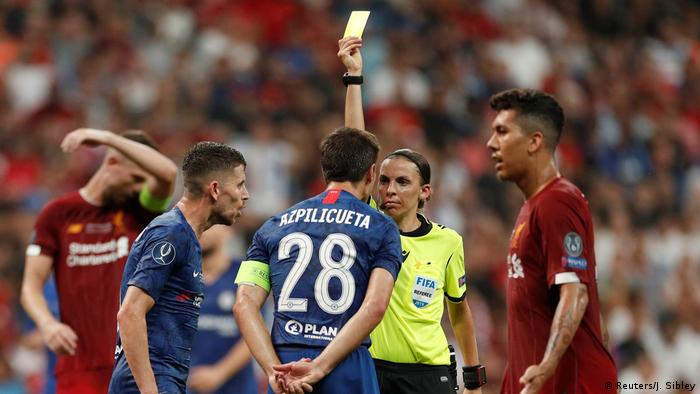 Frappart issues a yellow card during the men's European Supercup between Liverpool and Chelsea in 2019.

In the career of the former soccer player from Herblay-sur-Seine, near Paris, there is only one direction: upwards. After the start of her second career as referee in French women's soccer and the lower leagues of the men's leagues, Frappart celebrated her world championship premiere at the Women's World Cup 2015, taking charge of two games. Frappart had previously made history in her homeland with debuts as a referee in the fourth (2009), third (2011) and second league (2014) of men's football. Frappart made her first appearance in the French Men's Cup in 2015 shortly before the World Cup in Canada — one historic highlight after another.

"I have developed a lot since I started," Frappart said in a 2017 interview with "Global Sports". It is the sobriety coupled with self-confidence and determination that distinguishes her on the field. The next question is: when will the next highlight come?

It is the year 2019, which for all the milestones Frappart has already reached, will be her personal moon landing. In April, she became the first female referee to lead a match in Ligue 1, France's top division. Besides the German Bibiana Steinhaus, who took charge of Bundesliga games between 2017 and 2020, Frappart is the only woman to lead matches in one of the five major European leagues in England, Spain, Germany, Italy and France. 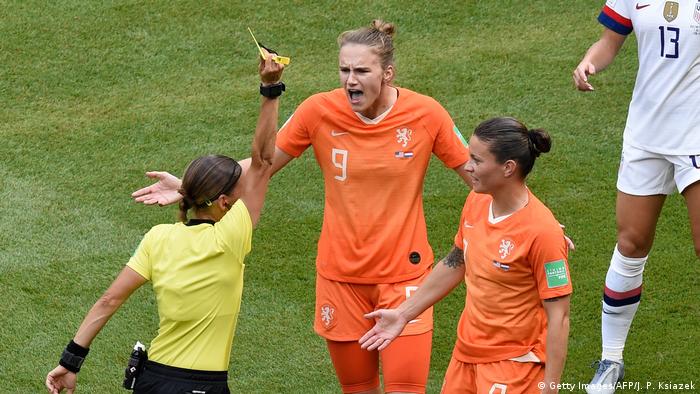 Frappart issues a yellow card in the 2019 World Cup game between the Netherlands and USA.

And she continues to walk in the footsteps of her colleague from Germany, who recently ended her career. Like Steinhaus at the World Cup 2011 in Germany, Frappart took charge of a World Cup game in her own country — USA vs Netherlands in front of 57,000 spectators in Lyon. In women's soccer Frappart has achieved almost everything as a referee, the award for referee of the year at the end of 2019 is almost a formality. But milestones in her career have always been only intermediate goals.

"I have the refereeing seminars in France, UEFA and FIFA to thank," Frappart once said. "I was able to improve a lot there technically, tactically and physically and am now better equipped for every assignment." The respect she commands in the game were recognised with her selection for the 2019 UEFA Supercup. She has "the tools to succeed on the big stage" and has "shown over the years that she is one of the best referees in the world," says UEFA refereeing boss Roberto Rosetti.

UEFA boss Alexander Ceferin said that Frappart should serve as a model for "millions of girls and women throughout Europe". The credibility — often a rare commodity in soccer — of these words from UEFA's top management is further strengthened by Frappart's selection for a Champions League game a good one and a half years after the Supercup. UEFA is serious about its pioneer Frappart and is giving her the chance to break new ground again. But for the 36-year-old, that is just business as usual.

World Cup official Felix Brych and Bibiana Steinhaus have been named Germany's referees of the year for 2018. Meanwhile, one of Brych's assistants in Russia has reacted to sharp criticism from Serbia's head coach.

Bibiana Steinhaus made headlines this year by becoming the first female to referee a match in one of Europe's top leagues. However, she tells DW that every referee should be judged solely on his or her performance.

Iranian state TV did not broadcast a Bundesliga soccer match because of the presence of a woman as referee, media say. The Islamic country censors the showing of women in "revealing" clothes such as football shorts.

UEFA aiming to use momentum to drive women's football forward 23.08.2022

UEFA sees huge economic potential for women's football in Europe. DW talked to Borussia Dortmund's Svenja Schlenker after the club were praised for their concept following a recent study.