Sri Lanka′s new leader to visit China after scaling back ties | Asia| An in-depth look at news from across the continent | DW | 25.03.2015

After suspending Chinese-funded projects and seeking closer ties with India, Sri Lankan President Maithripala Sirisena heads to Beijing in what experts view as a bid to restore a more balanced relationship. DW examines.

Following his trip to India last month, President Sirisena will visit Beijing on March 26 to attend the annual Boao Forum for Asia and to hold talks with the Chinese leadership, including President Xi Jinping. High on the agenda will be a proposed bilateral free trade agreement (FTA), the re-negotiation of more than $5 billion worth of Chinese-funded projects, and Sirisena's attempt to reassure Beijing about re-establishing a positive bilateral relationship, and continuing to seek stronger trade and investment ties.

Since winning the presidential election in January, President Sirisena has scaled back bilateral ties with China. Citing a lack of transparency and government approvals, the Sri Lankan leader halted construction work on a $1.4 billion port project off Colombo commissioned by his predecessor Mahinda Rajapaksa, who had turned mainly to China as a key source of financial support and development.

The move has prompted China to defend its investments and raised concerns in Beijing, which had increased its presence in the South Asian nation in recent years by pumping billions of dollars in investments and building critical infrastructure such as ports and airports. 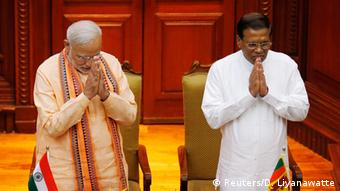 Sirisena's first foreign trip as president was to India, which has historically had strong ties with Sri Lanka

"The suspension of the flagship port city development project by the Sri Lankan government has resulted in a determined bid by the Chinese government to get the project re-started. Full page advertisements highlighting the virtues of the project have been published in the national newspapers by the Chinese company responsible for the project," Jehan Perera, Executive Director of Colombo-based National Peace Council, told DW.

The analyst adds that Chinese government officials have publicly issued statements that they hope that the Sri Lankan government would honor the contracts that have been signed and warned of adverse consequences to Sri Lanka's international credibility in obtaining foreign investment should the project is stopped.

But why did Colombo change its China policy? During his election campaign, Sirisena promised to strengthen ties with other powers to ensure that the country's sovereignty was not being eroded by an excessive dependence on a single global power. This explains why his first foreign trip as president was to India, which has historically had strong ties with Sri Lanka.

Sri Lankan President Sirisena has included 26 opposition lawmakers in his national unity government in a bid to push through reforms in the country. The move comes ahead of a parliamentary vote later this year. (22.03.2015)

Another reason is that Sirisena apparently does not give priority to China in the same way his predecessor did. "Rajapaksa needed China's diplomatic support to ward off war crimes charges, and he got unlimited funds for development through uncontrolled borrowings from China. Those who head the new government do not view this aspect of China-Sri Lanka relations favorably," said Perera.

In this context, analysts such as Rajiv Biswas, Asia-Pacific Chief Economist at the analytics firm IHS, believe that while Sirisena's China visit will be aimed at restoring a positive bilateral engagement, it will be within the context of more balanced bilateral ties with other key powers, including India, Japan and Western powers.

"While President Sirisena recognizes the importance of strong bilateral ties with China, he does not want Sri Lanka to depend solely on one world power," Biswas told DW. Moreover, he points out, there are also grassroots concerns amongst the Sri Lankan population about the increasing Chinese dominance of funding and constructing new infrastructure projects in Sri Lanka.

Analyst Perera explains that the high cost of the Chinese funds and commissions that have allegedly been siphoned off has become a scandal in Sri Lanka.

Other projects such as the Chinese-funded Mattala international airport have become "a white elephant" and the new government has virtually shut it down." said Perera. 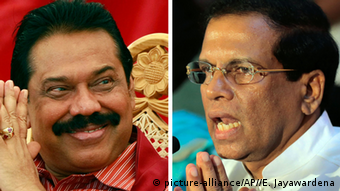 But despite the tensions, analysts believe that Sirisena will try to find a pragmatic solution given China's importance as the largest economy in the Asia-Pacific and the second largest economy in the world. Trade between Sri Lanka and China stood at $3.1 billion in 2013, out of which US$ 2.9 billion worth of goods and services were imported by Sri Lanka. Sri Lanka exported only US$ 200 million worth of goods and services to China.

In this context, a proposed FTA, aimed at strengthening economic and trade ties in both countries, is expected to be finalized during the visit. Moreover, as economist Biswas points out, President Sirisena will also be looking to ensure that China will remain a key partner for development of infrastructure in Sri Lanka, particularly given the China-led initiatives to create major new regional funding for Asian infrastructure projects through the creation of the USD 100 billion Asian Infrastructure Investment Bank and the USD 40 billion Silk Road Fund.

From its side, China will be keen to ensure that Sri Lanka will co-operate with Chinese ambitions to create a new Maritime Silk Route that will include Sri Lanka. "China may also seek to continue to use Sri Lanka as a port facility for Chinese naval vessels, such as the refueling of several Chinese submarines which docked in Sri Lanka in late 2014, although the Sirisena government may be more reluctant to allow such arrangements to continue, since this could damage Sri Lanka's bilateral relations with India, Japan and Western powers such as the US." said Biswas.