Norway wore T-shirts in their first World Cup qualifier to protest alleged human rights abuses in Qatar. Meanwhile, Mike Tyson has said that a boxing match with fellow senior citizen Evander Holyfield is back on. 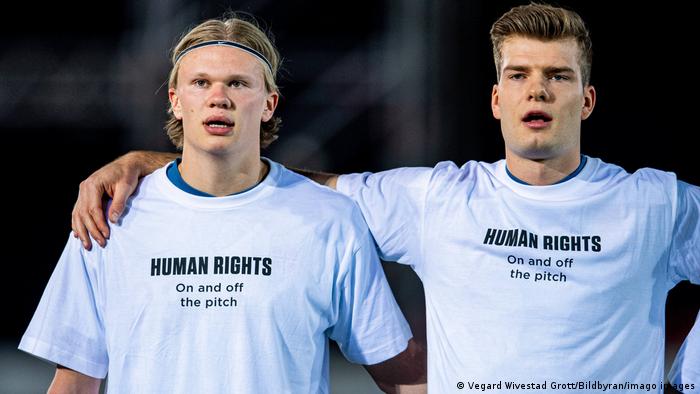 Members of the Norwegian national team marked the start qualifying for the 2022 World Cup in Qatar by protesting against the host country's alleged treatment of workers before kick-off in their opening match against Gibraltar on Wednesday.

Norwegian players, including Borussia Dortmund's Erling Haaland, wore t-shirts, which read: 'Human rights – on and off the pitch' as they lined up for the game, which they went on to win 3-0.

A movement to boycott the tournament, started by Norwegian top-flight club Tromso, has recently gathered pace in the country. Tromso have asked the Norwegian FA to consider boycotting the World Cup following an investigation by UK daily "The Guardian" which found that 6,500 migrant workers had died in work-related accidents since the tournament was awarded to Qatar in 2010.

Qatar's government responded by saying it had taken steps to improve health and safety of workers in the last two decades and had imposed punishments on business owners who violated safety standards.

Mike Tyson has said there will be a rematch with Evander Holyfield after all.

"I just want everybody to know the fight is on with me and Holyfield," the 54-year-old Tyson said during an Instagram Live session with luxury hotel chain Haute Living. "Holyfield’s a humble man I know that and he’s a man of God but I’m God’s man. Listen, I’m going to be successful May 29."

The statement came a day after the manager of the 58-year-old Holyfield had released a statement saying plans for a May 29 fight at Miami's Hard Rock Stadium had been under "intense negotiations for several months" but that Tyson’s side had "declined all offers."

The rivalry between the two fighters is best remembered for an incident in a 1997 bout in which Tyson bit off a piece of Holyfield’s ear.

New Zealand Olympians to get early access to COVID-19 vaccine

Athletes representing New Zealand at the Tokyo Olympics later this year will be able to apply to be vaccinated against COVID-19 before they depart, the government said on Wednesday.

Chris Hipkins, the minister responsible for New Zealand's response to the global health crisis, said people would be eligible to jump the queue for the vaccine on compassionate grounds or to compete in events of "national significance".

"The key yardstick here is people travelling in an official capacity and ensuring their participation is in our national interest," Hipkins told reporters in Wellington. "They will have to make an application and it will depend on what sort of events they are participating in, to whether they fit the national interest criteria."

The German Football League (DFL) has tightened its coronavirus hygiene rules amid rising cases in Germany and an extended lockdown across the country.

Mandatory rapid tests will begin from April 1 and quarantine trainings camps may also be implemented.

The DFL oversees the top two divisions of German football. All clubs must conduct rapid tests every training and travelling day if they are in an area where  the virus incidence over seven days is higher than 35 (infections per 100,000 people).

Quarantine training camps of between 5-14 days could also come into play in order to avoid matches getting suspended. The DFL are determined to finish the campaigns in May.

A number of games in the second division have been postponed this season.

Bundesliga outfit Bayer Leverkusen have reacted to an ongoing poor run of form by parting ways with coach Peter Bosz, it was announced on Tuesday. Former Stuttgart boss Hannes Wolf will take charge with immediate effect, while Peter Hermann is set to return as assistant.

"Given the footballing developments in recent weeks, we have come to the conclusion that the dismissal of Peter Bosz can no longer be avoided," explained sporting director Rudi Völler.

Die Werkself, who topped the table in mid-December, have lost ten of their 17 competitive games in the calendar year 2021 and are due to face cellar dwellars Schalke after the international break.

Belize's national football team was briefly held up by assault rifle-toting insurgents in Haiti on Monday, the country's football federation said. The central American country's team, known as the Jaguars, is currently in Haiti for a World Cup 2022 qualifier in the capital Port-Au-Prince on March 25.

They were headed to their hotel from the airport when they were stopped by the armed gang, the Football Federation of Belize (FFB) said on Facebook. "Despite the four-man police escort, the team bus was stopped by insurgents on motorcycles. We are pleased to report that our Jaguars, although shaken by their terrible experience, are safely at their hotel."

Former world and European champion Xabi Alonso is to take over as Borussia Mönchengladbach head coach in the summer, according to reports from BILD and SportBILD.

"We are not commenting on this story and will be in touch if there is what to announce," said club spokesman Markus Aretz on Monday the German press agency (DPA).

No fans for Leipzig's clash with Bayern

The Bundesliga's top-of-the-table clash between RB Leipzig and Bayern Munich on April 3 will take place behind closed doors as coronavirus infections in the region have risen.

"At the moment it is completely illusory to play in front of spectators in Saxony and Leipzig," Leipzig mayor Burkhard Jung said Monday. "That is unthinkable in the next few weeks."

A report by Sportbuzzer suggested that 999 fans could be allowed to attend, but Jung said that the pilot project aimed at ensuring the safe return of fans to the stadium could instead "pick up speed in May or June."

India skipper Virat Kohli said on Monday that players should be consulted over the cricket calender as the extended bubble life during the coronavirus pandemic has strengthened fears of burnout.

"The players need to be spoken to and consulted with all round," said Kohli. "Otherwise it's going to be a case of whoever can last through difficult times like this plays, if not then move away and someone else replaces that player."

He added, "I don't think that's healthy for a cricket system and cricket culture moving forward which we definitely want to make stronger and stronger."