Hundreds of supporters attended a third division game in Germany, the first fans to attend a game in the country for months. And UEFA is to launch an investigation into an alleged racist incident in the Europa League. 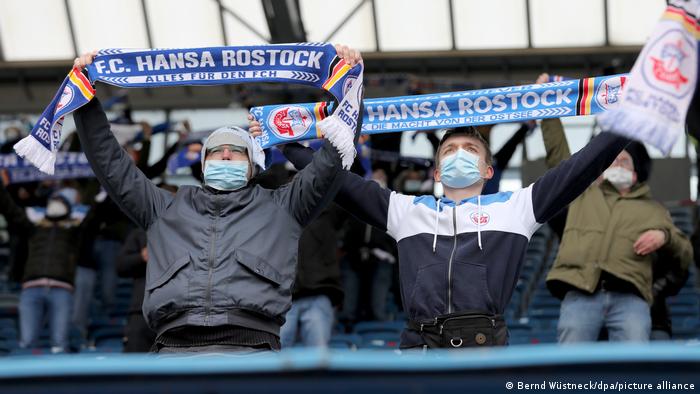 Hansa Rostock's 1-0 third division win against Halle on Saturday saw 777 fans in attendance, the first time supporters have been admitted to a match in Germany for five months.

All spectators underwent rapid coronavirus tests for the coronavirus and were
registered before entering the 29,000 seat stadium where they had to wear masks and observe social distancing rules. The club say none of the tests were positive.

"Everything has worked. We will now carry out an internal evaluation" said Rostock chairman Robert Marien.

Rostock's low infection rate was the reason why the club were allowed to welcome supporters in and will now report to the German football association (DFB) while clubs around the country watch on with interest.

UEFA has confirmed that it will launch an investigation into allegations that a Rangers player was racially abused during Thursday's Europa League defeat by Slavia Prague in Glasgow.

Slavia have denied that center back Ondrej Kudela made a racist remark to Rangers midfielder Glen Kamara during the second leg of their last-16 match, which the Czech side won 2-0. In their statement denying racial abuse had occurred, Slavia also accused Kamara of attacking Kudela in the tunnel after the match.

"UEFA is aware of an incident which occurred in the tunnel after the end of the match and which involved some players of both teams," a statement read. "We are waiting to receive detailed reports of the match officials who were present at the game before commenting further."

Rangers manager Steven Gerrard had demanded that UEFA take action after Kamara complained of being racially abused. Kamara appeared furious after Kudela leaned into his ear and said something while covering his mouth, sparking a melee in the latter minutes of an at times ugly match.

"Other players around him heard it so I will stand toe to toe with Glen Kamara and I'll deal with this however Glen wants to deal with it," Gerrard said.

The Scottish champions, who were reduced to nine men after Kemar Roofe and Leon Balogun were sent off, crashed out of the competition 3-1 on aggregate. Roofe's red card followed a studs-up challenge for the ball that resulted in Slavia goalkeeper Ondrej Kolar sustaining a fractured skull and horrific gash on his forehead near the hour-mark.

Dick Hoyt, who inspired thousands of runners, fathers and disabled athletes by pushing his son, Rick, in a wheelchair in dozens of Boston Marathons and hundreds of other races, has died at the age of 80, a member of the family said on Wednesday.

Dick Hoyt first pushed Rick, who is quadriplegic and has cerebral palsy, in the Boston Marathon in 1980. Dick and Rick, in a specialized wheelchair, completed 32 Boston Marathons together, until Dick, citing health issues, retired in 2014.

The Buffalo Sabres fired coach Ralph Krueger on Wednesday, just hours after they dropped a 3-2 decision at New Jersey – the Sabres 12th-straight defeat. Krueger, who was in the middle of his second season as head coach in Buffalo, finished with a record of 36-49-12 with the club. The Canadian-born, former West German national team player and coach of Switzerland had previously served as chairman of English Premier League football club Southampton.

Tiger Woods said on Tuesday he has left hospital and is recovering at home after being seriously injured in a car crash in Los Angeles last month.

In a statement released via social media, the 45-year-old golf superstar thanked hospital staff who cared for him following his single vehicle car accident on February 23.

"Happy to report that I am back home and continuing my recovery," Woods said. "I am so grateful for the outpouring of support and encouragement that I have received over the past few weeks."

Woods suffered serious injuries when his car flew off the road and flipped several times during last month's accident.

In the midst of the global Black Lives Matter movement, French footballer Jean-David Beauguel had to endure monkey chants during a recent game in the Czech top division. He told DW he "knows it will happen again."