Bayern Munich and Germany forward Serge Gnabry is in home quarantine after testing positive for COVID-19. Elsewhere, Denver is now set to be the venue for the baseball classic after MLB made a political statement. 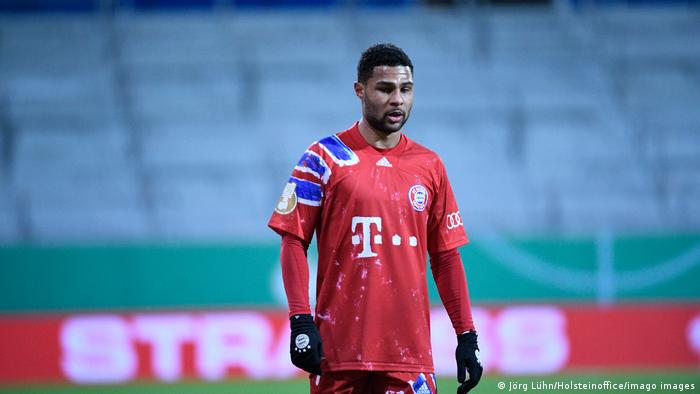 Serge Gnabry was set to start for Bayern Munich against PSG.

Bayern Munich and Germany forward Serge Gnabry will miss the next couple of weeks after testing positive for COVID-19, his club have confirmed.

Bayern coach Hansi Flick had said Gnabry was unlikely to be included for Wednesday's Champions League game against Paris Saint-Germain due to a sore throat, but the club later revealed the 25-year-old German had tested positive and was quarantining at home.

Major League Baseball is due to announce Denver as the new venue for the prestigious All-Star Game, US media report, after Atlanta was dropped as host due to Georgia's controversial new voting laws.

Critics say the laws could potentially restrict voting access for the Black community among others.

“I have decided that the best way to demonstrate our values as a sport is by relocating this year’s All-Star Game and MLB Draft," commissioner Rob Manfred said of the July 11-13 events. 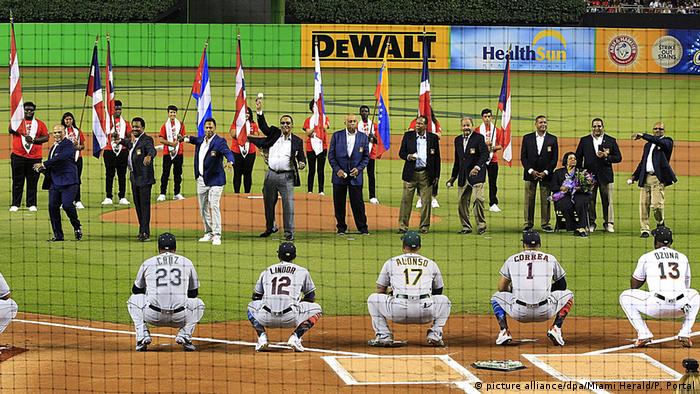 Marozsan to miss Germany games due to Lyon isolation

Dzsenifer Marozsan will miss Germany's games against Australia on April 10 and Norway three days later because her club side Olympique Lyon must observe coronavirus quarantine, the DFB has announced.

The whole Lyon squad is in isolation after a positive coronavirus cases and Germany coach Martina Voss-Tecklenburg has decided to leave the midfielder out of her plans even when the quarantine period elapses.

Defender Jerome Boateng will leave Bayern Munich in June,  influential German football magazine Kicker says, after the club's board officially rubber-stamped the decision not to extend his contract.

The 32-year-old has been at Bayern for 10 years, winning two trebles. Bayern have already recruited RB Leipzig's Dayot Upamecano for next term but with David Alaba also leaving, other reinforcements may be necessary.

Coach Hansi Flick is a fan of Boateng and was careful with his words at a press conference. "Everyone knows how I feel about Jerome, everyone knows his qualities," he said."I have said everything and don't want to say any more."

Youssoufa Moukoko out for the rest of the season

Borussia Dortmund's 16-year-old wunderkind Youssoufa Moukoko will miss the rest of the season after suffering a ligament injury in his foot while training with the German under-21 national team.

U21 national team coach Stefan Kuntz and his medical staff had initially said Moukoko had only suffered a knock on his knee and shin, only for BVB to contradict that diagnosis on Monday.

Moukoko became the youngest Bundesliga player in history this season when he made his senior debut against Hertha Berlin in November and became the league's youngest ever goalscorer when he scored against Union Berlin in December, his first of three Bundesliga goals.

German international Antonio Rüdiger was involved in a training ground dispute with Chelsea teammate Kepa Arrizabalaga on Sunday and was ordered to end the session early by coach Thomas Tuchel.

Less than 24 hours after Chelsea's shock 5-2 defeat to West Bromwich Albion in the Premier League on Sunday, Rüdiger reportedly went in late on goalkeeper Arrizabalaga, leading to a pushing match between the two.

Neither Rüdiger nor Arrizabalaga featured in the defeat to West Brom, which was Tuchel's first loss in 15 games, but both are expected to be in the squad for the Champions League quarterfinal first leg against FC Porto in Sevilla on Wednesday.

Valencia's players walked off the pitch during their La Liga game against Cadiz on Sunday, after the club said their player Mouctar Diakhaby was racially abused.

Diakhaby shared a heated exchange with Cadiz's Juan Cala shortly before halftime at the Ramon de Carranza stadium before indicating to the referee he was leaving the field, with the Frenchman's team-mates then following him off.

After a short delay, the Valencia team returned to the pitch to resume the match but without Diakhaby, who was replaced by Hugo Guillamon.

Valencia posted messages on social media soon after, which read: "The team have held a meeting and decided to continue the game, in order to fight for the honour of the club, but denounce racism of any kind."

Bayern Munich striker Robert Lewandowski has been ruled out of Saturday's top-of-the-table Bundesliga clash with RB Leipzig, and will also miss both legs of the Champions League quarterfinal against Paris Saint-Germain.

The Pole picked up a knee ligament injury on international duty against Andorra last week and Bayern have now confirmed following their own tests that the striker will be out for four weeks.

With 35 goals in just 26 games already this season, Lewandowski had Gerd Müller's record of 40 Bundesliga goals (in 1971-72) in his sights, a challenge which will now be more difficult with just eight games remaining.

And with Bayern defenders Jerome Boateng and Alphonso Davies also suspended for Saturday's game, RB Leipzig will have an opportunity to close the gap on the leaders to just one point and reignite the title race.

A decision on proposed reforms to the Champions League has been postponed until April 19 after alleged disagreements between the European Club Association (ECA) and European football's governing body UEFA.

UEFA's executive Committee had been expected to vote on reforms on Wednesday which would see the Champions League expanded from 32 to 26 teams, the current group stage model replaced by a "Swiss style" league and two qualifying places allocated based on historical coefficients. The proposed changes would take effect from the 2024-25 season.

On Tuesday, however, The Athletic reported that the decision has been postponed with the ECA, which represents elite clubs like Bayern Munich, Manchester United and Real Madrid, wanting greater control of the competition's broadcast rights.

The alleged reason for the postponement is only likely to intensify the opposition to the proposals from fans, many of whom already consider the planned changes to be based on greed.

World champion sprinter Salwa Eid Naser will have a two-day appeal hearing next month that could lead to a ban from the Tokyo Olympics for breaking anti-doping rules. The Court of Arbitration for Sport said Tuesday it will hear the case involving the 400-meter runner over two days on April 22-23.

The World Anti-Doping Agency and World Athletics both filed appeals at CAS to challenge an independent tribunal ruling last year that cleared Naser on a technicality for doping tests she missed.

A verdict could be announced urgently with the Diamond League track series set to start in May. The first women's 400 race is on May 23 in Rabat, Morocco.

Schalke may be heading towards a first relegation in 33 years but there has finally been some positive news for the Royal Blues after main sponsors Gazprom committed to support the club even in the second division.

The Russian energy company has been Schalke's main sponsor since 2007, a partnership which came about due to former club boss Clemens Tönnies' business links to the country, including to President Vladimir Putin, and the deal has now been extended until 2025.

While Schalke's deal with Gazprom was worth a basic €20 million in the Bundesliga, it is reported to be less than €10 million in the second division - albeit with substantial bonuses promised in the event of an immediate return to the top flight, at which point the deal would return to previous Bundesliga levels.

Local brewery Veltins, which sponsors Schalke's Veltins Arena, have also renewed their commitment to the club with a "low eight-figure" deal in the second division.

Bayern Munich striker Robert Lewandowski suffered a knee injury while playing for Poland against Andorra on Sunday and will be unable for his country's next game against England on Wednesday.

A statement from the Polish football association said that treatment for the ligament injury can last five to ten days, meaning that the 32-year-old Bundesliga top scorer could be a doubt for Bayern's top-of-the-table clash against RB Leipzig on Saturday.

A television documentary has revealed that Bayern Munich and Hoffenheim bosses were aware of planned fan protests ahead of a game between the two clubs last year, and that the reactions to protests and insults from Bayern supporters were at least partly "planned."

In February 2020, the Bundesliga game between Bayern and Hoffenheim ended in farcical scenes when the players were ordered to leave the pitch and then play out the final stages in a state of truce after Bayern fans had directed insulting banners at Hoffenheim owner Dietmar Hopp.

As DW reported at the time, Hopp is an unpopular figure among some German fans after bankrolling Hoffenheim's risen through the leagues, obtaining an exemption from the 50+1 ownership rule and pursuing fans in the courts with unorthodox means, while the protests were also linked to a longer-running conflict involving so-called collective punishments.

Now, a documentary shown on public broadcaster ZDF this weekend has revealed that the unprecedented reactions of the players and officials were not the spontaneous show of solidarity they first appeared, with then Bayern president Uli Hoeness admitting that the clubs knew of the planned fan protests in advance.

Furthermore, former DFB president Reinhard Grindel says in the documentary that DFB vice-president Rainer Koch wanted to deploy undercover operatives in fan blocks in order to identify individuals and "destroy the ultra scene." Koch denies this was the case.

Watzke to continue until 2025

Borussia Dortmund have announced that chief executive Hans-Joachim Watzke has extended his contract and will remain in charge of the Bundesliga club until 2025.

Financial director Thomas Tress and marketing director Carsten Cramer have also extended their contracts as Dortmund look to ensure "continuity in personnel" in an unprecedented situation.

"Despite the dramatically different landscape caused by the coronavirus pandemic and the accompanying consequences in terms of revenues, the board has successfully managed to keep the ship on course in stormy waters," read a cub statement.

Going into further detail on club finances, the statement also confirmed: "Even against the backdrop of the pandemic, nobody need worry about Borussia Dortmund's future. Regardless of qualification for the Champions League, the next two seasons are financially accounted for."