Four Catalan lawmakers must now choose between leaving their seats in parliament empty or resigning. In a fractious assembly, the ruling could work in the favor of acting Prime Minister Pedro Sanchez. 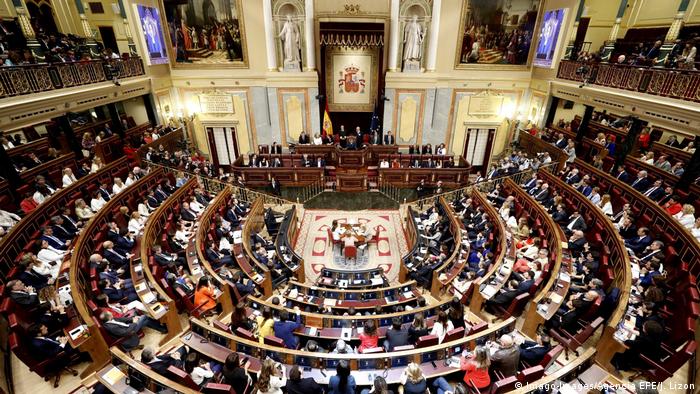 Four jailed politicians on Friday have had their lawmaker rights suspended while they face trial after their push for independence for Catalonia.

Speaker Meritxell Batet said the decision to suspend the former vice president of the region, Oriol Junqueras, as well as Jordi Turull, Josep Rull and Jordi Sanchez, was taken in order to comply with Spain's criminal code.

The four men are facing lengthy spells behind bars having been charged with rebellion for organizing a banned referendum that was followed by a brief declaration of independence.

Junqueras, meanwhile, is also a candidate for the European Parliament elections that take place on Sunday across Spain.

The Spanish parliament's decision comes after the Supreme Court gave the political figures temporary leave from jail on Tuesday. They were then sworn in along with the rest of the lawmakers who were elected in a general election last month. But the rights they received as elected representatives have now been removed.

The repercussions of the latest ruling are not yet known for what has been a fragmented country in recent years, heightened by the vote in Catalonia in 2017. The government at the time, the People's Party, did not recognize referendum as legally binding and the autonomous region has been in a state of flux ever since.

The number of politicians in parliament has reduced from 350 to 346 as a result of the suspensions.

If the seats remain empty, the total number of lawmakers would decrease, which in turn could work in acting Prime Minister Pedro Sanchez's favor as it would reduce the threshold of an absolute majority for the Socialist Party leader, thus allowing him to be sworn in for a second term.

France and Spain have agreed to work closer to guarantee the survival of brown bears in the Pyrenees. There are only a few hundred bears left in Spain. (18.05.2019)

Made in Germany, heard in Spain: The Leon cathedral organ connection

This Easter, the Leon Cathedral will awe many Mass-goers with its powerful organ. Though DW's Cristina Burack knows the cathedral well, discovering the organ was made by Klais Orgelbau in Bonn sparked a hunt for meaning. (18.04.2019)

Inside Europe: A new government for Spain