France and Spain have agreed to work closer to guarantee the survival of brown bears in the Pyrenees. There are only a few hundred bears left in Spain. 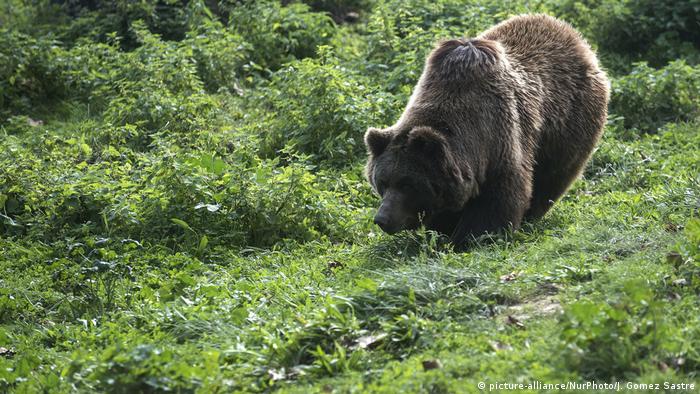 France and Spain agreed on Friday to guarantee the survival of reintroduced bears in the Pyrenees mountains along their common border.

Attempts to bolster the population of brown bears in the region have upset local farmers whose livestock are prime targets for the large omnivores.

Claverina, a bear, recently crossed into Spanish territory and killed eight sheep, triggering protests from Spanish farmers. The bear was introduced to the region from Slovenia in 2018 and has been roaming widely with Sorita, another female bear.

The regional government of Navarre requested a meeting between the two administrations, leading to what local media have dubbed "the bear summit" at the Spanish Ministry of Ecological Transition in Madrid. Representatives from the autonomous regions of Catalonia and Aragon also attended.

An official statement said Madrid and Paris hope to "consolidate the presence" of the brown bear in the Pyrenees after hunting reduced the population in the west of the region to just two males.

They agreed to increase technical coordination and, in particular, improve the flow of information to consolidate the presence of the brown bear in the different slopes of the Pyrenees. Spanish authorities currently receive tracking data on the bears hours after it reaches their French counterparts.

They also agreed to improve prevention measures to avoid attacks on livestock in the Pyrenean valleys, in line with efforts carried out in the Cantabrian mountain range. That range covers the whole of northern Spain and is currently inhabited by a population of around 300 brown bears.

There are thought to be about 14,000 brown bears throughout Europe, and the struggling Spanish population represents their western-most limit. Romania has the largest population of brown bears in the continent.

John Bolton, former National Security Advisor for Donald Trump, calls for the fall of the Iranian regime in DW interview 47m ago