A bear activist group said more bears should be released into the Pyrenees to ensure their long-term viability. The Ferus association has faced off against farmers who say the animals are a threat to their livestock. 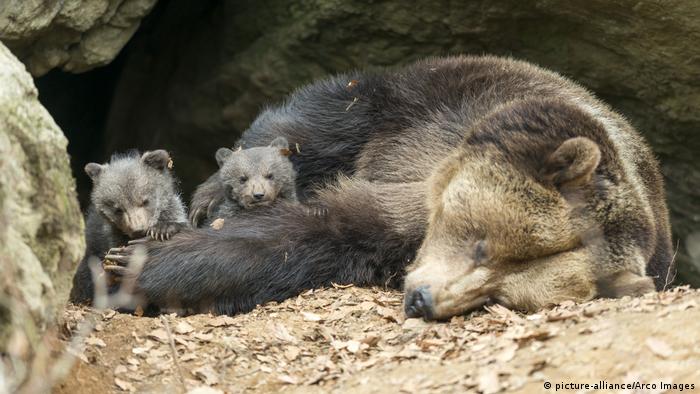 French animal activist group Ferus said on Wednesday that more bears should be released into the Pyrenees.

Wildlife experts say there are only about 40 brown bears living in the mountain range, which straddles the France-Spain border.

In October, French authorities airlifted two pregnant bears from Slovenia into the Pyrenees to help boost their meager population, as tensions flared between farmers and elected officials.

The two bears — named Claverita and Sorita, meaning "heiress" and "little sister" in the local Bearnaise language — are "still in excellent shape," according to France's National Office for Hunting and Wildlife (ONCFS). This month it released a video of Sorita:

"The good news of 2018 is without doubt the release of two bears in the Bearn region in October," the Ferus association said. "But there's still a long road ahead of us."

In September, protesting farmers poured blood and dumped sheep carcasses in front of the office of one mayor who backed the plan to introduce the two bears.

Some farmers have vowed to shoot them on sight.

Last year, farmers in the Pyrenees received compensation for 798 farm animals and 25 beehives destroyed by bears, or where bear involvement could not be ruled out, according to official figures.

"Complete security for the bears is far from assured because of an anti-bear minority which remains violent," Ferus said.

Bears from Slovenia were first imported into France in 1996, when hunters had all but wiped out the native population.

A team of dental and wildlife experts have spent a day operating on a 250-kilogram brown bear known as Igor. The bear had suffered from tooth decay as a result of spending his early life in a cage. (16.09.2016)