The Spanish public prosecutor has requested a European arrest warrant for ousted Catalan President Carles Puigdemont after he failed to appear for a court hearing. Eight of his colleagues have been remanded in custody. 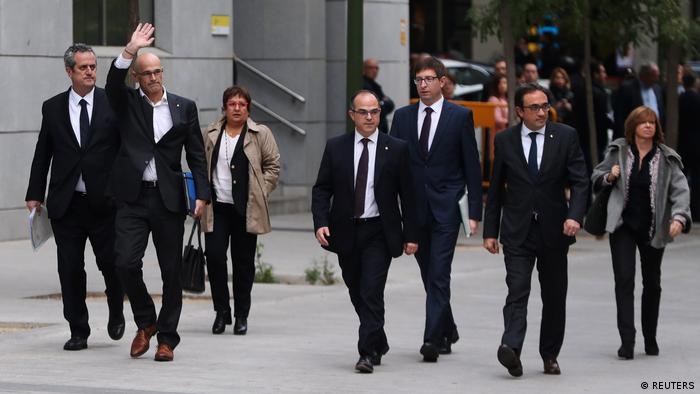 Spain's state prosecutor has applied for a European arrest warrant for Carles Puigdemont and other former members of his government for their role in a controversial independence referendum.

The deposed Catalonian leader refused to leave Belgium and appear before the judges on Thursday.

"The climate is not good, it is better to take some distance," his lawyer Paul Bekaert told Reuters. "If they ask, he will cooperate with Spanish and Belgian justice," the lawyer added.

Puigdemont and four of his sacked colleagues fled to Belgium on Monday as charges against them were unveiled. The ex-Catalan president declared he would stay in Brussels so he could act in "freedom and safety." 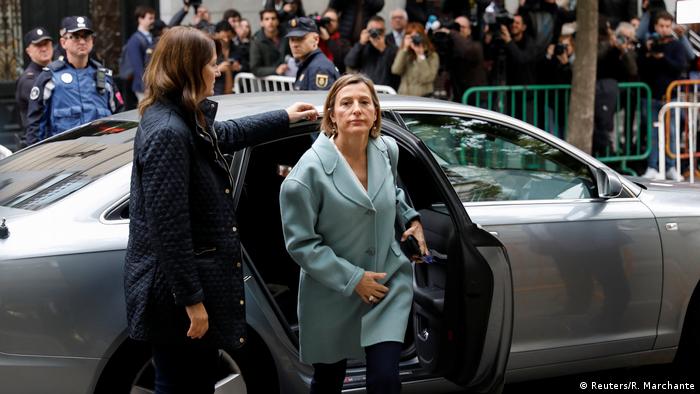 However, nine of Puigdemont's cabinet colleagues did appear before the Madrid court. Former Catalan Vice President Oriol Junqueras and seven others were remanded in custody pending an investigation and a potential trial. Former Business Minister Santi Vila, who stepped down from the cabinet before a unilateral declaration of independence on Friday, was granted bail of 50,000 euros ($58,300).

Other pro-independence politicians also arrived to face a separate Supreme Court probe in Madrid, including the former Catalan parliament speaker Carme Forcadell. The Supreme Court subsequently announced that the questioning of Forcadell and five other regional parliament board members was postponed until next week, on request of their lawyers.

Puigdemont refuses to return to Spain for questioning

DW correspondent Charlotte Chelsom-Pill reported a pro-independence rally on the streets of Barcelona on Thursday, with protesters expressing their support to Catalan lawmakers in Madrid.

Spain's state prosecutor on Monday filed charges of rebellion, sedition and misuse of public funds against Puigdemont and former members of his government for holding a banned referendum on secession on October 1, and then unilaterally proclaiming independence.

Read more: 'Rajoy will not make concessions to anyone'

Puigdemont's Belgian lawyer said Wednesday he was seeking to have his client questioned in Belgium instead of traveling to Madrid.

"He is not going to Madrid, and I suggested that they question him here in Belgium," Bekaert told The Associated Press. He said such an arrangement was possible, but he didn't know if the Spanish authorities would accept the offer.

A statement issued by the ousted cabinet, which claimed to still be "the legitimate government" of Catalonia, said some members would travel to Madrid and appear in court to "denounce the lack of guarantees from the Spanish justice system."

The statement also described the charges as "disproportionate," saying they were "equivalent to crimes such as murder or terrorism."

If an arrest warrant is issued, Puigdemont could be immediately detained by Belgian authorities and subsequently face extradition to Spain.