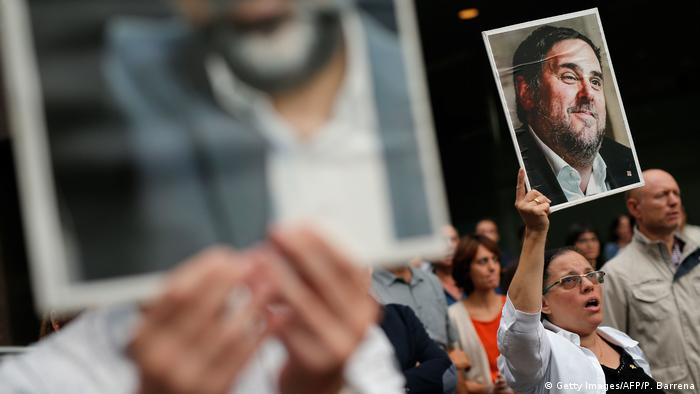 Spain's Supreme Court on Thursday said that Oriol Junqueras should not be released from prison, denying him immunity as a a Member of the European Parliament (MEP).

A legal request had been filed for Junqueras to take up his seat at the parliament, in line with a ruling by the European Court of Justice (ECJ).

Judges in Luxembourg in December said the politician should be entitled to immunity as a member of the parliament. It said he should have been allowed to travel to a Spanish swearing-in ceremony at the parliament after he was elected an MEP last May.

However, the Madrid court refused to recognize Junqueras as an MEP because the deliberation stage of his trial had already begun when he was officially recognized as an MEP elect.

"There are no grounds to grant his freedom," the court wrote in its ruling. It said the ECJ-recognized travel privileges were "not a protective shield against the sentence."

Junqueras, who is head of the separatist Esquerra Republicana de Catalunya (ERC) party, was sentenced to 13 years in prison last October for his role in Catalonia's failed 2017 secession bid. The charges were sedition and misuse of public funds.

The ECJ's ruling late last year had been hailed as a victory for Junqueras.

However, the court said Spain's top court should decide on how its ruling should apply, given that Junqueras' status had changed from suspect to convicted felon.

The decision in Madrid disregarded an advisory opinion by Spain's state attorney, which said Junqueras should be released in line with the ECJ decision. It also provoked an angry reaction from Junqueras‘ supporters.

"Shame on the Spanish justice system, it is a scandal!" top ERC party official Pere Aragones wrote on Twitter. "You cannot ignore the ECJ ruling. Once again, this violates the rights of Junqueras and thousands of citizens who voted for him. We will fight to the end."

Spain has issued European Arrest Warrants for two other Catalan politicians who were also elected as MEPs, Carles Puigdemont and Antoni Comin. The pair fled Spain after an outlawed 2017 referendum on independence, and are now living in Belgium.

A Belgian court suspended the consideration of the extradition requests for the pair from Spain earlier this month. While the pair have both been accredited as MEPs, they had not yet taken up their seats in the parliament.

Socialist Pedro Sanchez will become prime minister again in a minority government with far-left Podemos. Sanchez has vowed to open a dialogue with Catalonia. (07.01.2020)

Opinion: Nation states — have they served their purpose?

Are nation states the only conceivable construction to bond people together? In an era marked by both globalization and separatism on the other, nations are feeling the pressure from all sides, says Alexander Görlach. (09.01.2020)