The Socialists came in first in Spain's general election, but fell short of a majority for the second time this year. Tensions over Catalonia dominated campaigns, prompting a surge for the far-right.

Spain's ruling Socialists came in first in Sunday's general election but have fallen short of a majority.

Some 37 million people were eligible to cast their votes in the latest election. The Interior Ministry put turnout at 69.91% — down from the record 71.76% during the general election in April.

With almost all of the votes counted, acting Prime Minister Pedro Sanchez's center-left PSOE party was on track to secure 120 seats — on par with the 123 it secured in April, but coming up far short of the 176 seats needed for a majority in the lower house of parliament.

Sanchez told supporters that he was committed to forming a government. "Now, no matter what, we will form a progressive government," he said. The acting prime minister pleged to reach out to all parties, "except those that reject a coexistence or that sow the seeds of hatred."

Sanchez has already ruled out a coalition with the PP, and he will need at least tacit support from other parties to be named prime minister.

The conservative People's Party (PP) saw a boost in support compared to the election earlier this year, taking 88 seats in the 350-seat parliament.

PP leader Pablo Casado celebrated his party's good results, saying that Sanchez was "the big loser" of the night.

The far-right Vox party was on track to take third place with 52 seats, more than doubling its presence in parliament since the last election in April.

"Just 11 months ago, we weren't even in any regional legislature in Spain. Today we are the third-largest party in Spain and the party that has grown the most in votes and seats," he said, promising to battle the "progressive dictatorship."

The night saw losses for far-left Unidas Podemos and a near debacle for the center-right Ciudadanos, two small parties that had come to the political arena in the past few years.

Podemos tallied only 35 seats, in comparison with the 42 it won earlier this year, sitting in fourth place.

Ciudadanos, which had come in third in the last election, went from 57 seats to 10. Party leader Albert Rivera resigned on Monday morning, having told supporters that there were "no excuses" for the bad result.

Much of the campaigns in the run-up to Sunday's vote focused on the heightened tensions over the independence movement in the northeastern region of Catalonia.

A new wave of protests erupted in the region after nine separatist leaders were sentenced to prison for their role in the 2017 independence referendum, which was ruled illegal. 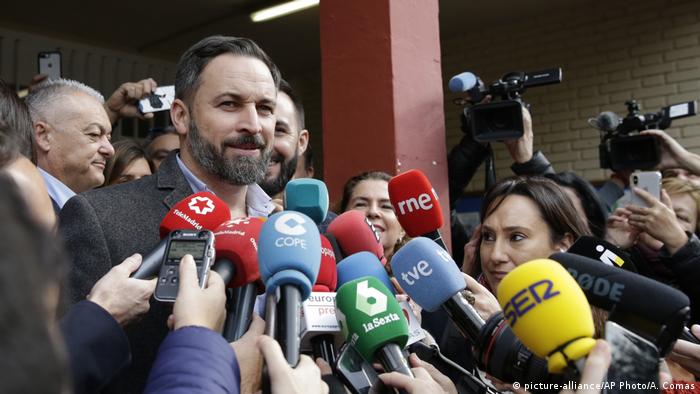 The recent demonstrations, some of which saw violent unrest, led to a boost in support for the far-right, with Vox vowing to take a tough stance against secessionists. The far-right party also supports harsher regulations against immigration.

The last general election in April also saw the Socialists win the most votes, but fall short of a majority. Attempts by acting Prime Minister Pedro Sanchez to secure support from other parties to form a government subsequently failed, prompting him to call an election.

Since 2015, Spain has struggled to put stable governments together with support for newer, smaller parties chipping away at majorities once held by the Socialists and the PP.