Spain: Far-right party Vox surges in polls ahead of election

Support for the center-left Socialists has remained steady, but upstart party Vox became the first far-right grouping in the Spanish parliament since the country returned to democracy after the Franco dictatorship. 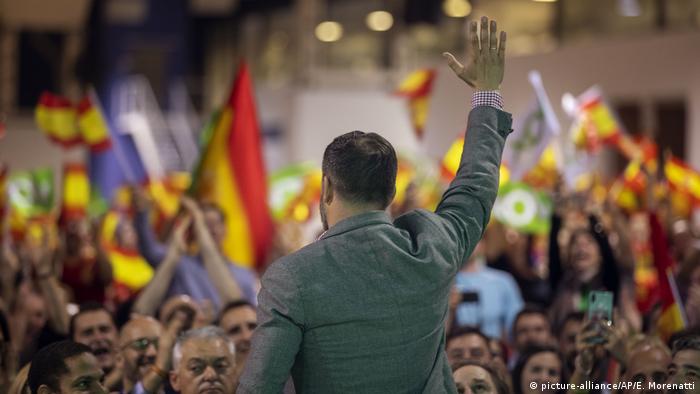 Spain's social-democratic Socialist Workers' Party (PSOE) is set to win the most seats in next week's election, according to a poll released Sunday, but it's the likelihood of far-right party Vox almost doubling its representation that was the most striking finding of the survey.

Spanish daily El Pais released the data ahead of next Sunday's vote, when citizens head to the ballot box for the fourth time in as many years.

Read more: Far-right gains in Spain are not Franco nostalgia

The conservative People's Party (PP) is also set to make inroads, with the biggest losers expected to be the recent additions to the political spectrum on the peninsula, Podemos and Ciudadanos.

The forecast predicted that the PSOE would win 121 seats, down marginally from 123.

Vox is set for significant gains, winning 46 seats, up from 24 after the last elections in April this year.

The poll, conducted by data research firm 40Db, showed the PP likely to have 91 lawmakers, up from 66, while Ciudadanos would sink to 14, down from 57.

Acting Prime Minister Pedro Sanchez from the PSOE was forced to call the election after failing to form a government. But Sunday's poll would suggest the deadlock continuing, particularly as the center-left leader has ruled out a coalition with the PP, the party on course to finish second.

Madrid offers to host COP25 after Chile pulls out

The Supreme Court ruling could possibly put an end to decades of controversy over the former dictator's burial place. Francisco Franco's rule, from 1939 to 1975, was characterized by brutal political repression. (24.09.2019)