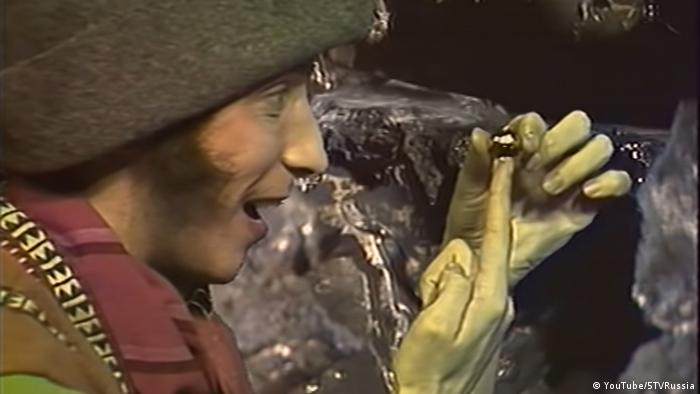 In 1991, Khraniteli (Russian for "guardians"), a television adaptation of J.R.R. Tolkien's epic The Lord of the Rings fantasy stories, was broadcast shortly before the USSR collapsed.

It is a low-budget production that aired 10 years before the release of the first part of director Peter Jackson's blockbuster film trilogy, LOTR for short, which starred Elijah Wood as the young hobbit Frodo Baggins. Interestingly, Wood himself tweeted about the Russian film on YouTube.

The Soviet film features simple special effects that make many scenes feel like theater productions rather than a Hollywood-style motion picture. The soundtrack for the film was composed by Andrei Romanov of the Akvarium rock band and seems to be typical of the time.

More than a million clicks

After the film was broadcast on Leningrad Television in 1991, it seems to have disappeared without a trace, according to The Guardian. Leningrad Television's successor, 5TV, posted the film on YouTube last week, where it has garnered more than 1.5 million views in just a few days.

Viewers have been divided in their opinion of the story. Film critic Michael Phillips wrote in The Chicago Tribune  that the film was "disorienting" and "should be enough to get your week off to a start from which you may never recover."

Sirisaac Newton wrote on YouTube that "Gandalf's smug entrance into the birthday party is a scene that I will never forget. I never realized that he was almost the size of the hobbits though. A mini-wizard."

One called Fotis D wrote: "I really feel sorry for those who dislike this masterpiece."

Reinis Rudzitis, who clearly spent a lot of time going through the 2,600-odd remarks from other viewers, wrote: "Ok, I don't know what I love more — the movie itself or the comment section."

Fans looking for a fresh approach to the Tolkien classic may be happy to know that a new, multiseason TV adaptation of The Lord of the Rings is filming in New Zealand in cooperation with the Amazon Prime streaming service.

Best known for playing Bilbo Baggins in the "Lord of the Rings" film trilogy, the English actor also starred in dozens of other roles. In his lifetime, he was nominated for six BAFTAs as well as an Academy Award.

He created an entire universe, left an impressive oeuvre - and was one of the most successful authors of all time.

Amazon Prime brings Tolkien's fantasy world back to life. Opulent images, a diverse cast — fans have great expectations for the most expensive series in TV history.