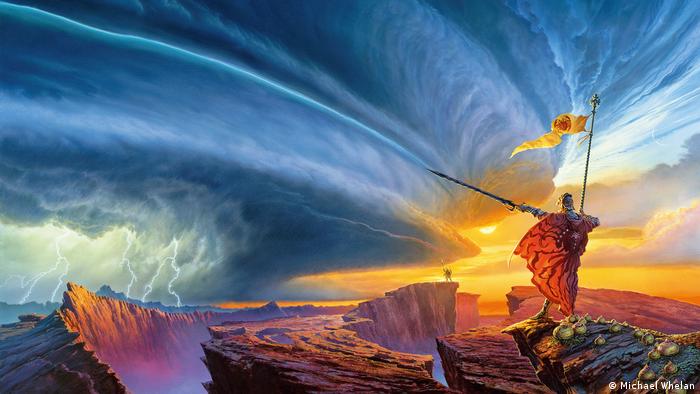 Fantasy books and movies such as Lord of the Rings or The Chronicles of Narnia have been successful for generations already. But why do so many people enjoy being engrossed in fantastical worlds?

This question is addressed in the book Masterpieces of Fantasy Art, recently published by Taschen. The XXL-sized book introduces the history of the genre and includes pictures of the original works.

Fantastical creatures have been featured on canvas for centuries. The Renaissance painter Hieronymus Bosch, for example, is incorrectly considered an early of fantasy art, according to the book's author Dian Hanson. In fact, the reason why the Dutch master painted these particularly creepy religious allegories and biblical themes more than 500 years ago was rather to keep the faithful in check. By depicting devilish monsters or dark forest creatures, he reminded them that it was better to choose God than surrender to sin. Yet, even if it was meant to merely scare one into piety, his fantastic worlds were a source of inspiration.

The same can be said of Renaissance artist Michelangelo or the French Symbolist Gustave Moreau who at times also featured ghoulish figures in their art.

In these artists' lifetimes, fantasy art as we know it today couldn't exist; such imagery rather depicted things that people saw as real threats. "Fantasy art could only exist after we abandoned our belief in dragons, witches, gorgons, griffins and nymphs," writes the book's editor. A genre begins with Lewis Carroll

The origins of fantasy art can be found in England in the middle of the 19th century.

The illustrations for children's book classics such as The Tale of Peter Rabbit or Pinocchio are also at the heart of the fantasy art genre. Their goal was to create dream worlds to "satisfy childish longings," writes Hanson.

In 1889, H.J. Ford invented dragons, griffins and superheroes that still have a significant influence on the films, games and novels of the fantasy genre today. He also created illustrations around the year 1900 for Peter Pan and Jonathan Swift's Gulliver's Travels.

The race to see who could create the most fantastic creatures attracted artists from all corners.

Among them was Art Nouveau glass painter Harry Clark who did illustrations based on Jacques Offenbach's dreamlike opera, The Tales of Hoffmann. 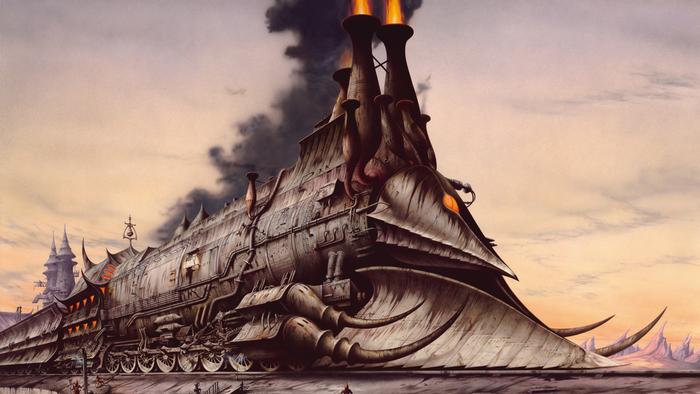 British artist Rodney Matthews is known for his exaggerated and often threatening depictions of flora, fauna and animals

In 1912, the cartoon book Tarzan of the Apes was a great success. The demand was enormous and its success ensured that more and more artists specialized in this new subject. After all, fantasy art is a commercial product for the masses that had to fight for the favor of as many buyers as possible.

In the early 20th century, even serious authors such as H.P. Lovecraft, Ray Bradbury or Philip K. Dick were involved in the fantasy new genre, as can be seen by the topics in magazines and stories of various literary genres that were popular in the USA from the 1930s to the 1950s.

Another pioneer in the fantasy genre is the US magazine Weird Tales which began to publish fantasy, science fiction and horror stories in the comic style in 1923. Among them were works by horror specialist H.P. Lovecraft who is still praised for his goose bump-inducing reads.

The preference for the macabre in Weird Tales can already be seen on the covers, on which goggle-eyed ghosts, slippery monsters and intrepid fighters of all kinds cavort. New superheroes were introduced; some primitive like Conan the Barbarian, one of the greatest and most important figures of the fantasy genre.

Other characters were more nuanced and took inspiration from Greek mythology, such as H.P. Lovecraft's monster Cthulhu.

Whoever the protagonist was, Weird Tales sold well to the masses. 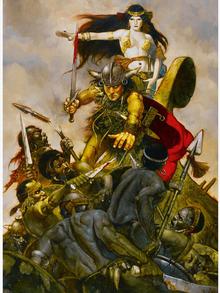 Muscular, barbaric heroes are a common theme in the fantasy art genre

Readers should not confuse fantasy with science fiction — the genres are worlds apart, points out Hanson. Even the motifs found in both genres prove it.

Spaceships, for example, are unthinkable in the fantasy world. Instead, fantasy worlds should be as unscientific as possible, complete with dragons and monsters and sexy heroes.

In the 1930s, the Great Depression put pressure on the magazine market. As printing costs rose, the need to sell increased. And so, onto the covers went scantily dressed women in wild poses — as the cliché goes, sex sells.

But at the end of the 1930s, another innovation came to the genre: Fantasy authors like J.R.R. Tolkien began to publish longer stories and novels. The Hobbit was published in 1937 and the Lord of the Rings series followed in 1954. Books like The Chronicles of Narnia, published in 1953, underpinned the importance of the fantasy genre in literature, placing emphasis on longer series. In 1974, the comic anthology Métal Hurlant, which translates to "howling metal," was published in Paris, bringing France to the forefront of the fantasy genre. With its science fiction and horror comics, it developed into a fantasy publication popular with adults. In a way, it was the precursor to the graphic novel and was enjoyed by readers of all ages, not just kids. Gustave Flaubert's novel Salammbô was published in comic format by Métal Hurlant. Philippe Druillet created this mural in France. He is one of the founders of the French publication "Métal Hurlant"

But not all readers enjoyed the increasingly sexualized content. For such individuals, there was the fantasy illustration genre that developed along with the Lord of the Rings culture, introduced by the brothers Greg and Tim Hildebrandt. The illustrator brothers from Michigan brought Middle-earth and all its beings to life in the 1970s.

1974 also saw the release of the role-playing game Dungeons and Dragons, in which players with elf, dragon or dwarf characters embark on new adventures that spring purely from their imaginations.

In Hollywood, Star Wars and the film series Alien were created and enormously successful. The international popularity of the fantasy culture continued to grow — and it continued with digital game and trade fairs.

Meanwhile, fantasy art has made it to the big leagues: Some originals of fantasy books, magazines and paintings are now generating auction proceeds just as high as works by a sought-after painter or sculptor.

The unicorn has taken advertising by storm. Consumers are snapping up any product associated with the one-horned horse. DW's Sophie Schimansky reports from New York City on the reasons behind the hype.

Is "Inkheart" author Cornelia Funke Germany's J.K. Rowling? The star children's writer is releasing a sequel to her 1997 bestseller "Dragon Rider." "The Griffin's Feather" is a fantasy tale with a green message.

Both are masters of the fantasy genre. Now, the Oscar-winning Mexican filmmaker and bestselling German author have collaborated on a literary adaptation of del Toro's acclaimed dark fantasy film "Pan's Labyrinth."