Southeastern Turkey hit by blast after HDP crackdown | Europe | News and current affairs from around the continent | DW | 04.11.2016

At least eight people were killed and 100 were wounded in an explosion outside a police building in the Turkish city of Diyarbakir. The blast came hours after authorities detained the leaders of pro-Kurdish opposition. 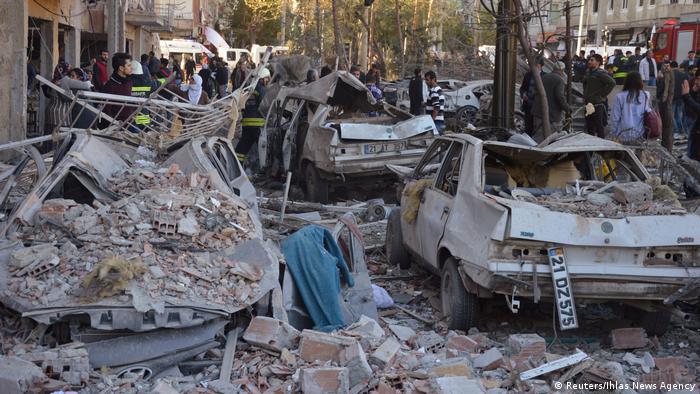 A large explosion killed at least eight people and wounded 100 in the largest city in Turkey's mainly Kurdish southeastern region on Friday, multiple news outlets reported. Television footage showed people walking amid broken glass and other debris from a building used by police; windows were blown out from the apparent explosion that witnesses said could be heard several kilometers away.

Diyarbakir's governor's office blamed the outlawed Kurdistan Workers' Party (PKK) though the self-styled "Islamic State" claimed responsibility for the car bomb that exploded outside a police building. The attack - which authorities said killed both police officers and civilians - comes just hours after police rounded up more than a dozen lawmakers from the pro-Kurdish Peoples' Democratic Party (HDP) on charges of aiding the outlawed PKK, which has fought a decades-long insurgency for political and cultural rights for Turkey's ethnic Kurds.

Tensions have surged in Turkey's Kurdish-dominated southeast since a fragile ceasefire declared by the PKK collapsed in 2015 with deadly clashes between PKK militants and security forces an almost daily occurrence. IS jihadists have also stepped up attacks inside Turkey.

The lawmakers' detention appeared part of a large-scale operation against the HDP, which is the third largest party in the Turkish parliament with 59 seats and the main political representative of the Kurdish minority.

Hundreds of charges were filed against HDP lawmakers following parliament's lifting of prosecutorial immunity, including "disseminating terrorist propaganda" to "membership in an armed terrorist organization." Turkey used extraordinary powers passed in the wake of the failed July coup to remove the elected mayor of Diyarbakir from office with a ruling party loyalist installed in her place.

The detentions led German Foreign Minister Frank-Walter Steinmeier to summon the Turkish charge d'affaires in Germany. Germany's relations with Turkey have been tense in recent months after German's lower house of parliament passed a resolution on the 1915 genocide of Armenians. Disputes have also covered lawmakers visits to a German air base in Turkey and the Turkish purge of intellectuals, journalists and politicians with alleged ties to US-based cleric Fethullah Gulen.

In a Friday statement via social media, the European Union's foreign policy chief also said the bloc is "extremely worried" by the arrests and has called a meeting of EU national envoys in Ankara.

The EU is engaged in a delicate stage of its relationship with its Muslim neighbor. Since an agreement in March, Turkey has helped to all but end a flow of refugees and migrants to the EU via Greece after a million people arrived last year. In return, the EU is providing aid for Syrian refugees in Turkey, has pledged to revive Ankara's long-stalled membership talks with the bloc promised to ease travel visa terms for Turks visiting Europe.

In the wake down of the political crackdown, access to social media sites Twitter and Whatsapp was blocked in Turkey on Friday, an internet monitoring group said.

Access was being blocked by throttling, an expert from the monitoring group Turkey Blocks said, a method of slowing certain websites to the point where they are unusable.

The pro-Kurd Peoples' Democratic Party has been excluded from Turkey's post-coup "democracy" rallies and constitution talks. Observers say the HDP is gradually being left out of politics. (13.08.2016)

Turkey's president has accused Germany of becoming the "backyard" of Gulenists, who are blamed for an failed coup attempt in Turkey. Ankara has requested the extradition of a number of alleged Gulen members from Germany. (03.11.2016)