The exclusion of the pro-Kurd HDP in post-coup Turkey | Europe | News and current affairs from around the continent | DW | 13.08.2016

The pro-Kurd Peoples' Democratic Party has been excluded from Turkey's post-coup "democracy" rallies and constitution talks. Observers say the HDP is gradually being left out of politics. 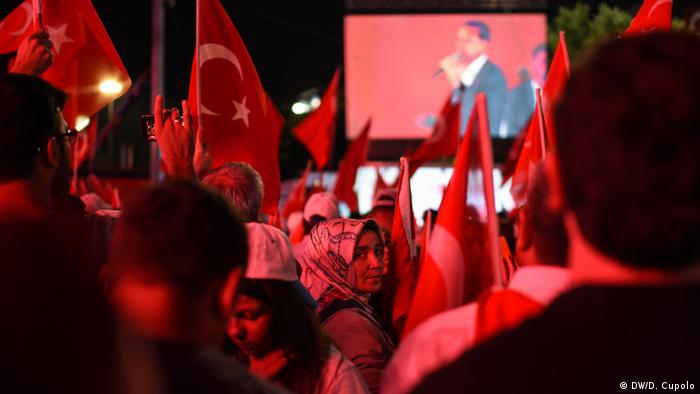 After the coup attempt on July 15, Turkey's entrenched political polarization seemed to have given way to dialogue. And yet participating in the conversation has gotten increasingly harder for the Peoples' Democratic Party (HDP), which was not included in talks with the ruling Justice and Development Party (AKP) and the main opposition Republican People's Party (CHP) and National Movement Party (MHP). After not having been invited to the "Democracy and Martyrs' Rally" in Istanbul's Yenikapi district on August 7, HDP has also been left out of the other major parties' negotiations toward a new constitution.

The increase in terror attacks by the Kurdistan Workers' Party (PKK) has also weakened the HDP's influence in the arena of politics. The HDP had emerged as a voice of hope for marginalized Kurds and left-wing voters when it received 6 million votes, or 13.1 percent, in the June 2015 parliamentary elections.

The party's share in the elections that followed on November 1 dropped to 10.75 percent, however, and its positive image suffered during a year of clashes between the PKK and Turkey's military. Even though HDP did not have trouble preserving its constituency, the party is scarcely heard from within Turkey anymore. 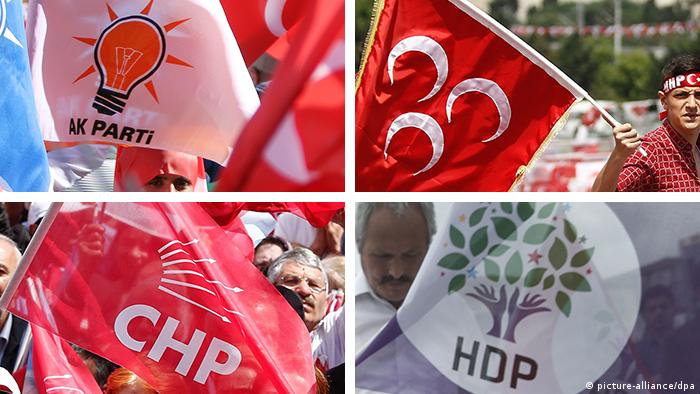 Clockwise from bottom-left: The CHP, AKP and MHP have excluded the HDP

President Recep Tayyip Erdogan said he did not invite the HDP to participate in his "democracy" rally because "I do not make distinctions between PKK and FETO" - an acronym for "Fethullah Terrorist Organization," a reference to the US-based cleric whom the government has accused of planning the coup. "I do not invite people who are in cooperation with those types of organizations," Erdogan said. "If I do, I cannot explain it to the martyrs, veterans."

Ozer Sencar, the owner of Metropoll Research Company, said support for the AKP had increased Turkey-wide after the attempted coup d'etat, while the HDP's had dropped to about 8 percent. Sencar said the HDP would not necessarily lose supporters for its exclusion from the rally and the constitutional talks between the other three parties with seats in parliament. But, Sencar added, the HDP has lost support from non-Kurdish voters. "As long as the nationalist discourse increases and gains influence, the statements that equate HDP with PKK also increase," Sencar said. "Thus, HDP's votes are fixed below the threshold."

In a statement to the Turkish newspaper Cumhuriyet earlier this week, HDP Co-Chair Selahattin Demirtas said the party's door would be open to Erdogan if he wanted to engage in "principled and moral" reconciliation. Demirtas also denounced a recent declaration by Kurdish militants: "We do not approve of PKK's statement on how they will extend the battle to the cities, and we do not accept it. PKK should focus on enhancing possibilities for peace. This is what we want as HDP."

Mesut Yegen, a sociology professor who specializes in nationalism and Kurdish issues at Istanbul Sehir University, said it had become clear that the HDP was being marginalized despite the party's efforts toward reconciliation. On the other hand, Yegen said, given the complexity of the issues involving Turkey's large Kurdish minority, it would not be possible to ignore the party completely. "HDP looks like it is stuck between the government and Qandil," Yegen said. "At the same time, the disturbance to the public from clashes in cities offers HDP an atmosphere in which it can speak out against the PKK," Yegen added. "HDP is well-aware of the risks that could arise due to increased conflict between the government and PKK."

Many Turks are disturbed by the ways in which the HDP is being left out of political discussions, but they have also watched with concern as the PKK has intensified its presence in cities after last year's heavy destruction.

"To suggest that a political party that is supported by 15 million voters should be left out of the democratic mechanism is not good for Turkey," said Burc Baysal, the president of DISIAD, an association of industrialists and businesspeople in Diyarbakir. He called the demonstrations after the failed coup a positive development for Turkey's democracy, but added: "What should not be forgotten is that HDP has always paid the price for being on the streets. If people know the value of the streets now, HDP has a big share in this."

Baysal said the mainstream media's nonreporting of reconciliation efforts by HDP Co-Chair Demirtas had a negative impact on Turkey's democracy. "We need a political attitude which would not exclude HDP, but would involve it," Baysal said. "At this point, we will never accept PKK's acts of violence in the cities. If there is even a tiny hope of peace, PKK should pave the way for civilian politics."