The UNHCR's 2018 Nansen Refugee Award was presented to Dr. Evan Atar Adaha for his committed service at a hospital in war-torn South Sudan. He spoke to DW about his work and the current situation in the fragile region. 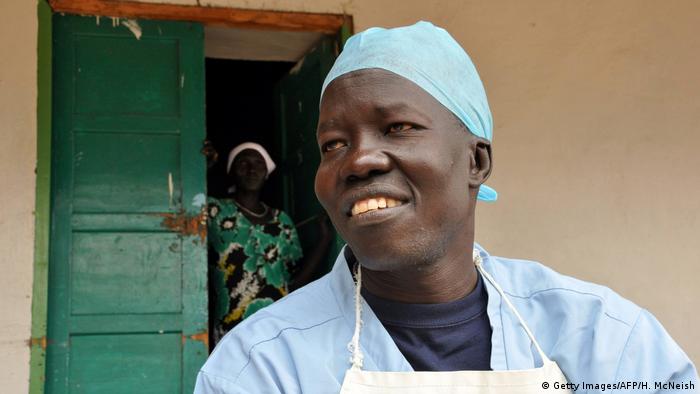 Dr Evan Atar Adaha is the medical director of his hospital in Bunj where about 200,000 people are provided medical service.

The UNHCR has named South Sudanese surgeon Dr. Evan Atar Adaha as the recipient of this year's 2018 Nansen Refugee Award for his dedicated service at a hospital in the conflict-ridden country.

Every year the prize is awarded to an individual or organization who demonstrates extraordinary service to people who have been forcibly displaced. The award is named after Fridtjof Nansen, who was the first high commissioner for prisoners of war and refugees for the League of Nations. The 2018 award ceremony will be held on the 1st of October in Geneva, Switzerland.

Adaha is a surgeon and medical director at a hospital in Bunj, a city in the county of Maban in the northeast of South Sudan. According to the UNHCR, the hospital provides medical services to more than 200,000 people, relying on limited supplies and equipment. .Adaha is said to work 48-hour shifts and his team performs almost 60 operations every week. He has been working in Sudan — and later in South Sudan — for over 20 years. During this time he also built two hospitals and trained young people to become nurses and midwives.

South Sudan gained it's independence from Sudan in 2011, with a bloody civil war breaking out two years later. Since then, approximately 1.9 million people have been displaced within the young country, and tens of thousands have died due to the conflict. On the 12th of September 2018, a new peace deal was signed between South Sudanese leaders, following the disintegration of an earlier peace agreement from 2015.

DW spoke to Adaha about his determination to help the people in South Sudan and the current situation in the war-torn country.

DW: How dire is the situation for people in Maban?

Evan Atar Adaha: Mabam is a surreal place. We have about 200,000 refugees who came here. When the war broke out in South Sudan, it became really difficult for people to get services like health services. The situation has been so difficult. We have seen the number [of patients] go up and the resources that are supposed to be there are not really coping with the numbers which are continuing to increase.

We are obviously talking about a very serious situation where people have been uprooted from their homes. Do you think the world has neglected these people?

Yeah, that is the sense. What is really important is that maybe people are not really seeing the real dire situation in Maban. If they knew exactly what was happening, the suffering of the people, they could have helped. It could also be because [other conflicts] are happening everywhere.

Do you think it was a good idea for you to stay in a city ravaged by civil war?

Yes, because that was the time they needed me the most. Not when things are easy.

Do you think it reflects poorly on humanity that the rest of the world had to wait for such a prestigious award to be given to you before they started paying more attention to the civil war in South Sudan?

I don’t think I should put the blame on anybody. But what is really important is that we have to help, whenever we come across [these situations]. Really, it's necessary for us to deal with them. We can help. 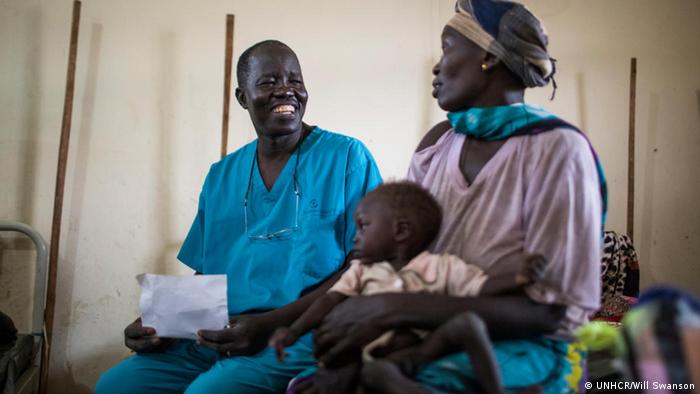 What inspires you in your work?

What inspires me? I feel better when I help others, at least with what we have. [The fact that ] with whatever I have I can help one person, three people...That's a great feeling for me.

Do you think the government in Juba understands the situation of these people and are trying to do something to help?

As a medical doctor I think it’s necessary for not only me, but the government or any other person to help in this kind of situation, because we all know how bad the war is. So it is really necessary. I think it is important to solve these problems and offer a complete solution to the whole situation — not just in Maban, but also elsewhere in South Sudan and other parts of the world.

You say that the situation there is very bad. What kind of cases do you treat in a normal day?

On normal days of course we have a large number of people to take care of. We have to take care of the mothers, for example, who are experiencing obstructed labor. We also have to treat the children who have acute malnutrition. These are the things which are still the most common. Then we come back to treat the gunshot wounds of [soldiers] in the waring parts of the country, or even of civilians who are also using guns.

Evan Atar Adaha is a surgeon and medical director at Maban hospital in north-eastern South Sudan and the 2018 winner of the Nansen Refugee Award.

The interview was conducted by Abu-Bakarr Jalloh. It has been edited and condensed for clarity.