South Korea: Transgender soldier suicide brings LGBT+ discrimination to the fore | Asia | An in-depth look at news from across the continent | DW | 23.03.2021

The suicide of Byun Hee-soo, a 23-year-old transgender soldier, has spurred calls for legislative reform in South Korea. Advocates have urged greater protections for LGBT+ people, both in the military and society. 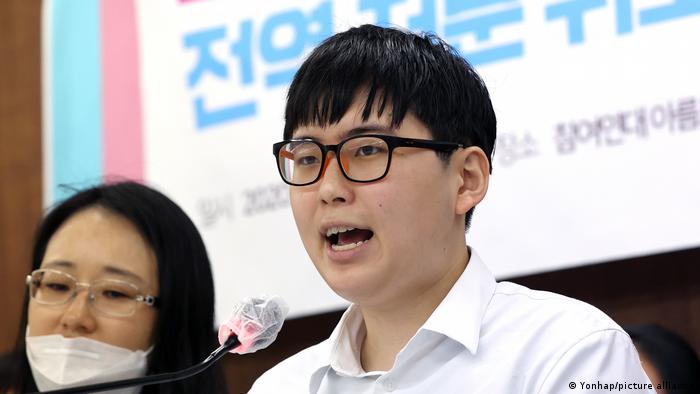 Byun Hee-soo speaking at a news conference in Seoul, in August 2020

The death of Byun Hee-soo, a transgender soldier in the South Korean military, has caused an outcry and placed the spotlight on LGBT+ rights in the country. Byun was found dead in her home in Cheongju on March 3, after taking her own life following a forced discharge.

Byun, 23, joined the military in 2017 and rose to the rank of staff sergeant, with the primary duty of driving a tank. However, she was forcibly discharged in 2020 after undergoing gender reassignment surgery. Her appeal for reinstatement was denied later that year.

Byun's immediate superiors and peers had been aware of her decision to have the procedure, which she underwent in Thailand in 2019. But the higher military leadership took issue with the surgery, and the Defense Ministry deemed her to be physically and mentally handicapped because of her lack of male sexual organs.

"I want to show everyone that I can be a great soldier … Please give me that chance," she said.

Last year, Byun won a court decision recognizing her as female, and the United Nations Human Rights Commission issued a statement to the South Korean government, that the discharge represented a violation of international human rights law.

Byun then initiated a lawsuit against the military for unlawful discharge, with the first hearing scheduled to take place in April of this year.

"It's hard to imagine what it must have been like for her to be abandoned, even betrayed," said Cho Kyu-suk, a member of the Center for Military Human Rights, which has been working with Byun.

Cho said that discrimination against LGBT+ people is prevalent in South Korean society, but that the discrimination is expressed differently in the military.

"Discrimination is more amplified in the military because we have a conscription system in which all young males [serve] about a year-and-a-half," Cho told DW.

The military's discrimination is not limited to transgender people.

In 2017, after a video surfaced online of two male soldiers having sex, the South Korean military conducted an investigation, seizing and forensically examining cell phones, interrogating troops, and charging more than a dozen with having homosexual intercourse, which is illegal in the military, even when off duty.

The military's ban on gay sex is a remnant of South Korea's time under US protection and influence after the Korean War.

"The US criminalized same-sex relations in its military code of justice in the 1950s, and it was imported into South Korea," said Cho.

South Korean politicians have been generally slow to protect the LGBT+ community from discrimination, and have often expressed the opposite of such support.

When asked about whether he would march in a gay pride parade or not, Ahn Cheol-soo, a current front-runner in the campaign to become the mayor of the capital Seoul, said: "the rights of those that oppose the parade must also be protected," as some displays were "excessively obscene."

Even President Moon Jae-in has reportedly said that he opposes discrimination, but is "against homosexuality."

Community must 'form a collective voice'

However, there is some hope, as progressive leaders are working on passing an anti-discrimination law through the legislature, something that Cho says would mark the first step to protecting the LGBT+ community. However, advocates of sexual minorities still have more work to do, he said.

"The community needs to form a collective voice, which hasn't really been heard, except for in the queer parade weekends or festivals."

Queer parades and festivals have not only created the opportunity to celebrate the liberation of sexual identities, but have also been a flashpoint for opponents from South Korea's religious right.

At the 2018 Queer Culture Festival in Incheon, just outside of Seoul, homophobic protesters outnumbered participants by a reported five to one. Protesters physically obstructed and hurled insults at the organizers, while there were also reports of violence.

"Christians are the main enemy of gay rights," said Lee Joo-Hyung, who is gay.

Lee came out to his friends and later to his family a few years ago. His Christian mother, strongly influenced by her preacher, "cried for days, told me I would be miserable, get sick and go to hell," he told DW. "Coming out was not easy."

Still, like others, he too hopes that things can change with the passage of anti-discrimination legislation. Lee said that while friends have cut ties with him, and he now questions whether to come out to people he knows and meets, he has not experienced serious instances of blatant prejudice or violence.

"Discrimination in South Korea is very hidden, and there is a lot of discrimination that happens beneath the surface," he said. Lee said he is also disappointed with the tepid response from politicians regarding Byun's death.

"South Korean politicians are very cautious because of the Korean Church and its large number of voters. They don't want to risk their political careers."

The United Christian Churches of Korea, which represents 50,000 member parishes throughout the country, has said it opposes any proposed anti-discrimination law.

In the wake of Byun's death, progressive lawmakers have also said they will step up efforts to see that the "Equality Act" can pass. Still, however, the anti-discrimination bill remains bogged down by hesitant lawmakers wary of a religious backlash.

"That's the power of the Christian vote," said Lee.