South Korea: Presidential race marred by corruption allegations and mudslinging | Asia | An in-depth look at news from across the continent | DW | 09.11.2021

With four months to go until election day, the two top candidates for the presidency are already at the center of allegations of corruption and abuse of power, with debate over policy relegated to the background. 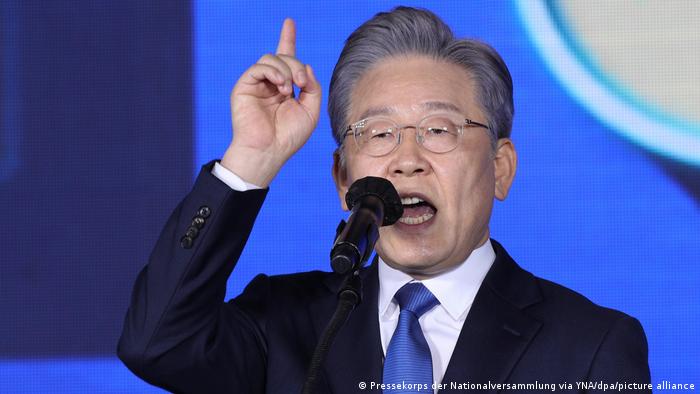 Four months ahead of the South Korea's presidential elections, accusations of scandal, abuse of power and corruption are dominating the debate, instead of discussions on policies and plans for the future.

President Moon Jae-in must step down at the end of his single, five-year term in March, and clearly hopes to pass the baton on to Lee Jae-myung, a former governor of Gyeonggi province and a fellow member of the ruling Democratic Party.

Lee will face Yoon Seok-youl at the ballot box after he won the nomination for the opposition People Power Party (PPP) earlier this month. Yoon's nomination is unconventional as he is not a career politician but a former prosecutor general under Moon who spectacularly fell out with the president.

In a public opinion poll on November 8, 57% of the respondents said they would back Yoon in the election, while 33% want Lee to become president.

Three smaller parties — the Justice Party, the Open Democratic Party and the People Party — each failed to register support in the double digits. 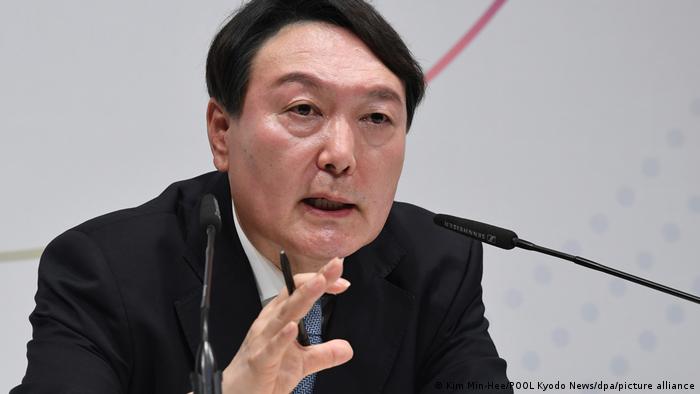 Conservative Yoon was removed from his prosecutor post by President Moon

Ohe Hye-gyeong, an academic at the International Christian University in Tokyo, told DW that like a lot of South Korean voters, she is disappointed that Moon's government has largely failed to live up to its promises over the last five years.

"Going into the election, finally bringing an end to the pandemic has to be the priority and they must also revive the economy," said Ohe.

There is a growing sense among the electorate that South Korea's politicians have spent more time exchanging accusations instead of creating policies that will benefit the public.

"It is very unfortunate that the personal issues of the two main candidates are what are making the headlines and completely obscuring the policies of the parties," said Park Saing-in, an economist at the Seoul National University.  "That makes me very worried about the future of South Korea," he told DW. 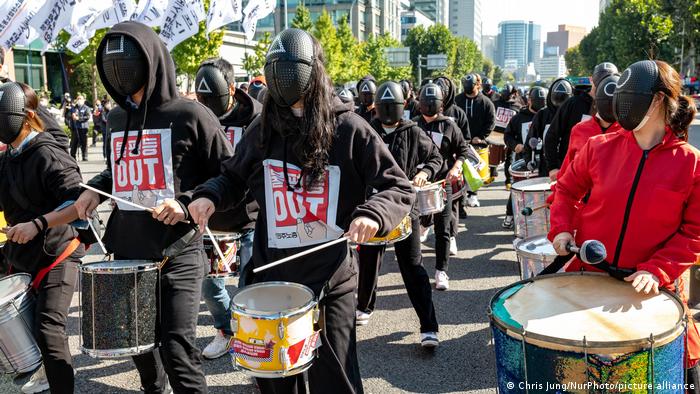 And while corruption has long been a feature of Korean politics, Park said the present situation is "exceptional." Both Lee and Yoon have been accused of wrongdoing and are the focus of official investigations.

Media reports accuse Lee of having links to organized crime, and for being involved in an allegedly corrupt property development project in Gyeonggi province when he was governor.

Investigators are still examining accusations that officials collaborated with developers to buy land cheaply and rake in huge profits, with a trial scheduled to start later this week of two local government officials who worked under Lee.

Lee has denied being involved in any underhanded deals, although Yoon used his acceptance speech after winning the PPP's nomination to call for prosecutors to launch a formal investigation into his rival.

"In the past, we have seen personal issues in politics, but never before to this magnitude in a presidential election," Park said.

Yoon, however, has his own legal problems to contend with. Investigators are looking into suggestions that while working as prosecutor general, he arranged for criminal complaints to be opened into politicians running in the 2020 legislative elections. Yoon has denied the allegations.

Yoon motivated by falling-out with president

Whatever the outcome of that probe, Yoon has performed a remarkable about face in the last eight years. He was instrumental in the investigation that eventually led to the impeachment of and subsequent arrest and conviction of former President Park Geun-hye for corruption.

Seen as a campaigner against wrongdoing in government, he was in 2019 elevated to prosecutor general by Moon and tasked with rooting out corruption.

Unfortunately for President Moon, one of Yoon's earliest targets was his new justice minister, Cho Kuk.

Cho was forced to resign after serving just over a month in office over a series of illicit business activities involving his wife and other relatives, as well as the falsification of the academic records of his daughter.

Cho's fall angered other members of Moon's party and his replacement as justice minister retaliated by demoting or moving many of Yoon's senior prosecutors.

Undeterred, Yoon further upset the party by investigating irregularities in the election of the mayor of Ulsan in 2018, with the meddling allegedly traced all the way back to the president's office.

Yoon was suspended in November 2020, accused of ethical violations, but fought back through the courts until Moon confirmed his suspension. In protest, Yoon resigned.

"It is not clear if Yoon had political ambitions previously, but he has always said that he was told to seek out corruption and injustice and that is what he was doing when he was suspended," said Park.

"I think that is a major motivation for him in this election now," he added.

South Korea's last two presidents are presently serving prison terms after being found guilty of corruption while in office.

If Yoon wins in the March election, it is not inconceivable that he will use his powers as president to pursue an investigation into Moon or others in the administration that he feels have slighted him.