Hopes for effective dialogue with North Korea have been weakened as voters and opposition parties call for a domestic focus. The Democratic Party's fall in the polls could bring about sharp changes in government policy. 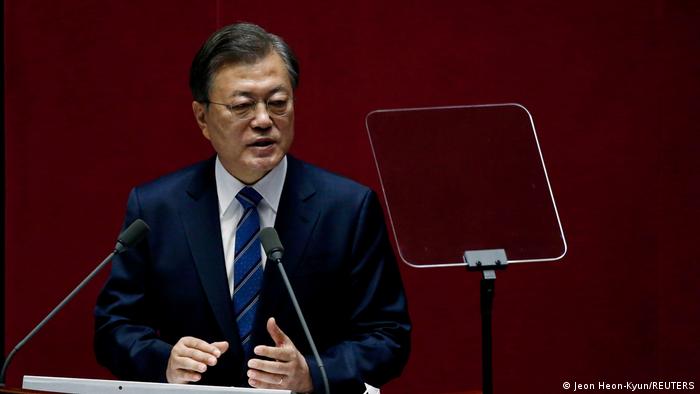 Opposition People Power Party (PPP) candidate Oh Se-hoon won the Seoul mayoral election by 57.5% to 39%, with the Busan PPP candidate winning by almost 30%, according to Yonhap News, South Korea's state media outlet. The results mark a complete reversal of the outcome of last year's parliamentary elections in which the Democratic Party won a super-majority of 180 seats in the 300-member national assembly.

The Democratic Party's downfall is linked to an ongoing scandal in which the country's land management officials were found to have widely speculated in the real estate market using inside information.

Urban apartment prices have soared despite dozens of government policies, making buying a home beyond many people's reach. That frustration was highlighted by this outcome, through a record turnout for local elections, of more than 50% of eligible voters.

"Liberal officials proved that they were little better than the conservatives in putting their personal interests ahead of the public good. Voters were disappointed," The Korea Times columnist Choi Sung-jin told DW.

The Seoul and Busan by-elections were held because of sexual harassment allegations against the previous mayors — both from the Democratic Party. Former Seoul Mayor Park Won-soon committed suicide, and Busan's mayor resigned as a result of the allegations. However, the outcome of the elections indicate a shift in public sentiment across the nation.

"This creates a springboard for the Conservative Party … This is the time to change the political regime," former conservative lawmaker Song Young-sun told DW.

And it will certainly impact the effectiveness of South Korea's current president, whose prioritizing of peacemaking with North Korea will be replaced with a greater emphasis on domestic issues.

"It's not getting easier for Moon to fulfill his desirable legacy in the last year of his term," Thomas Yoshimura, the South Korea representative for the Konrad Adenauer Stiftung, a German international civic political foundation, told DW.

He added that Moon will have to decide whether he wants to focus on the domestic agenda and "things that might matter for future elections," or inter-Korean relations.

That decision to focus on the domestic agenda appears to have already been made. In response to the election, Moon was quoted by Yonhap as saying that he will "concentrate on overcoming the COVID-19 crisis, revitalizing the economy, stabilizing the people's livelihoods and the real estate market, and rooting out corruption."

The greater question now is how these conservative victories will affect the broader national political landscape, and the presidential election slated for March of next year.

'A timely and welcome development'

"This is a very timely and welcome development for the conservative faction in South Korean politics, but the bigger game is the presidential election," Daniel Bong, a professor at the Yonsei Institute of North Korea Studies, told DW.

Several figures are jockeying for positions within both conservative and liberal factions, for the presidential election. What is contentious is how the electoral outcome could affect South Korea's foreign policy, especially towards North Korea and the United States.

"Policy toward North Korea will follow the US and UN line, and become much harsher, focusing on denuclearization first and then dialogue," said Song.

South Korea's liberals have been more in favor of engagement with North Korea. Moon's lineage traces back to former president and Nobel Peace Prize laureate Kim Dae-jung, whose "Sunshine Policy," involving engagement, cooperation and assistance for North Korea resulted in the first inter-Korean summit in 2000.

Moon hoped to emulate and expand on that achievement, orchestrating inter-Korean summits, and more importantly, the first meetings between the leaders of North Korea and the United States. Some suggest this electoral outcome only added to recent setbacks on the North Korea issue, which essentially further relegated Moon to a lame duck status.

The influence of these elections on next year's events is still somewhat unpredictable. For the Seoul mayoral election, the two leading candidates held a run-off just to determine that it would be Oh Se-hoon to seek the mayoral seat, just weeks before the vote. Oh Se-hoon returned to the post on Thursday, after stepping down 10 years ago.

The same last-minute jockeying of candidates and public sympathies has led to startling results in the past as well. Meanwhile, the current scandal ensnaring the Democratic Party may recede by the time South Koreans head to the polls to elect a new president next March.

"One year is a long time in South Korean politics," said Choi.